Diplomatic and economic relations between Tunisia and Turkey are at stake in the wake of statements by Turkish President Recep Tayyip Erdogan following President Kais Saied’s decision to dissolve parliament. 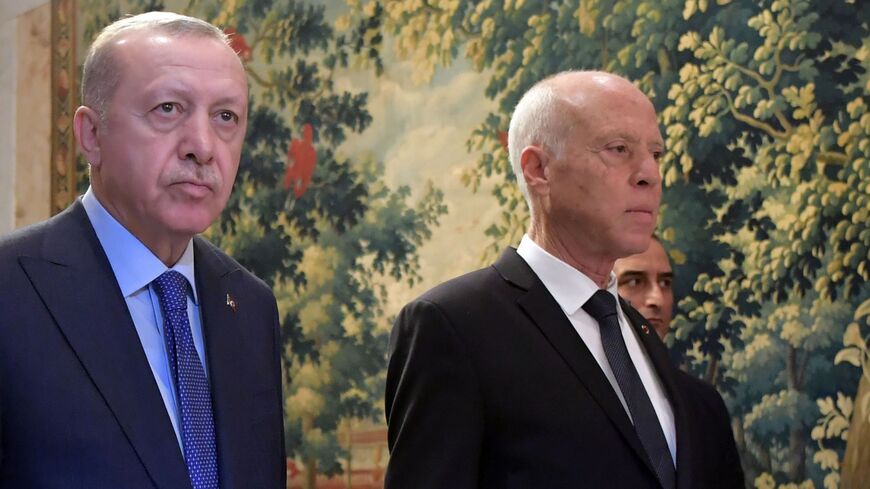 Speaking at an April 6 ceremony commemorating the 22nd anniversary of the death of former President Habib Bourguiba in the Monastir governorate in northeastern Tunisia, Saied said Tunisia is not an Ottoman state, in reference to the Ottoman Empire that occupied many Arab countries for years.

In remarks carried by a Turkish Presidency statement on April 4, Erdogan — who is close to the Islamist Ennahda party in Tunisia that represented the largest parliamentary bloc in the now-dissolved parliament — described Saied’s move as a “coup against the constitution, a smearing of democracy and a blow to the will of the Tunisian people.”

Tunisia’s authorities were quick to respond to Erdogan’s statement. On April 6, the Tunisian Ministry of Foreign Affairs summoned Ankara’s ambassador in protest against Erdogan’s statements, describing them as “unacceptable interference in internal affairs, which contradicts the brotherly ties binding the two countries.”

On March 31, Saied announced the dissolution of parliament months after suspending it.

The dissolution followed a plenary, virtual session held by the suspended parliament on March 30 and attended by more than 100 parliament members, during which they approved a draft law revoking the exceptional measures announced by the president since July 25, 2021, to suspend parliament, dismiss the prime minister and assume powers in the country.

Youssef Oueslati, a political analyst, editor-in-chief of the local Al-Shaab newspaper and spokesperson for the Tunisian General Labor Union, told Al-Monitor, “Saied’s response to his Turkish counterpart is surprising and may constitute a new turning point in the relations between the two countries, which have developed over the past 10 years. Ankara has benefited from Ennahda’s rule in the country to strengthen its influence.”

Oueslati added that Erdogan, who heads Turkey’s ruling Justice and Development Party (AKP), has recently started to feel that his influence in the region was diminishing, especially after both the fall of the Brotherhood-affiliated Mohammed Morsi’s regime in Egypt and the decreasing role of the Ennahda movement in Tunisia, which made him shift positions.

He said that Saied’s overthrow of the government and the parliament that was almost completely dominated by Ennahda, an ally of Turkey, infers that Ankara will lose a new strategic position.

In a related context, political analyst Abdeljabbar Maddouri told Al-Monitor that the recent Turkish position was a shift from the past Turkish diplomacy aimed at ending disputes with Arab countries. He said that the Turkish president’s recent position on Tunisia is the most severe since the political crisis in Tunisia erupted months ago, and it resulted from the obvious Turkish bias toward the Islamic Ennahda movement.

Maddouri pointed out that Turkey’s international relations show some ambivalence, and he explained that while Turkey is trying to repair its relations with Egypt and Israel, it is simultaneously seeking to maintain its relations with their opponents, who are exemplified by the Muslim Brotherhood in Arab countries and Hamas.

Meanwhile, Ennahda maintains close relations with the ruling AKP in Turkey amid close relations between Erdogan and the head of the party, Rachid Ghannouchi, who met with the Turkish leader several times over the past years. The tight relationship between Ennahda and Erdogan had raised the ire of the Tunisian parliament and led it to call for the removal of Ghannouchi from the presidency back in February 2021.

Erdogan had visited Tunisia in December 2019, seeking Saied’s support to dispatch Turkish forces and military equipment to Libya’s Tripoli via Tunisia. But his request was rejected in early 2020 amid accusations by the secular opposition parties in Tunisia that Ghannouchi helped the Libyan Government of National Accord (GNA), while Egypt and the United Arab Emirates supported the Libyan forces led by Khalifa Hifter against the GNA, which is close to Turkey.

Political analyst Mohamed Thweib believes that the recent developments between Tunisia and Turkey are the official end of the rule and projects of Muslim Brotherhood groups, on which Turkey bet for a long time to impose the project of the new Ottoman state in the region.

He told Al-Monitor that what happened to the Ennahda movement in Tunisia dealt a strong blow to the regional Turkish project, which made Erdogan, Ghannouchi’s ally, feel a great loss, hence the statements that he made following a long silence.

On the other hand, political analyst Basil Turjuman told Al-Monitor that Turkey’s military agreements with Tunisia in the field of military training, military industries, technology transfer and military health will be at stake after the Muslim Brotherhood-led government and parliament in Tunisia were dismissed and following Erdogan’s statements.

He added that after Erdogan’s statements, the agreement reached between the two countries in 2018 on promoting and protecting bilateral investments is also subject to cancellation, even though the suspended parliament had approved it more than a year ago. This agreement was originally proposed in 2016 and grants Turkish citizens, as owners of institutions and individuals, the right to own agricultural lands in Tunisia, Turjuman explained, adding that it gives them the right to own and borrow from local Tunisian banks.

Turjuman said that these agreements only played out in favor of Turkey and caused the loss of 50,000 workers in the local garment and textile factories.

He said that Erdogan is issuing such statements and positions in the Arab region to cover up for Ankara’s failure to address the domestic economic crisis in light of the deteriorating of the Turkish currency.