Erdogan plays to base with criticism of Tunisia

By slamming the dissolution of Tunisia’s parliament, Erdogan may have emboldened his ideological allies from the Ennahda party, but his criticism might backfire to further isolate political Islam. 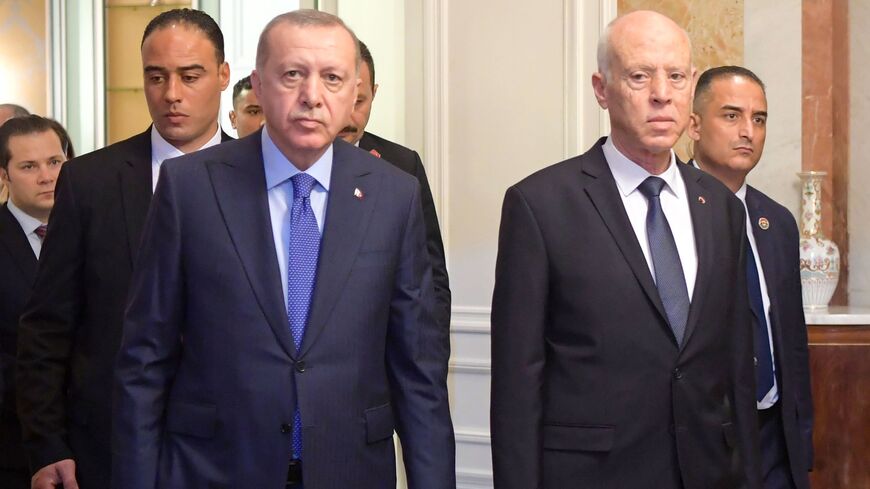 Non-interference in domestic affairs and ending support for the Muslim Brotherhood have been two major conditions that Turkish President Recep Tayyip Erdogan has faced in his fence-mending quest with Egypt and other Arab countries, leading him to tone down his rhetoric on regional issues in the past couple of years. Yet the Tunisian president’s decision to dissolve parliament has prompted a fresh outburst by Erdogan, fueling diplomatic tensions between the two countries.

Erdogan’s condemnation was meant as support for his close friend Rachid Ghannouchi, speaker of the dissolved assembly and leader of the Brotherhood-affiliated Islamist Ennahda party. “We see the developments in Tunisia as the smearing of democracy. The dissolution of a parliament of elected representatives is … a blow to the will of the Tunisian people,” he said April 4.

Erdogan spoke out after several days of silence following President Kais Saied’s March 30 decision to dissolve parliament, which he had suspended last year. Tunisia should stick to its election roadmap, Erdogan said, stressing that the political transition in the country could succeed “only through an inclusive and meaningful dialogue in which all segments of society, including parliament, are involved.”

Erdogan’s criticism generated a harsh response from Tunis. Foreign Minister Othman Jerandi called his Turkish counterpart to reject Erdogan’s comments, and his ministry summoned the Turkish ambassador. “Tunisia expresses its astonishment at the Turkish president's statement … these comments are unacceptable," the Foreign Ministry said. “Tunisia affirms its keenness on close relations with friendly countries but adheres to the independence of its decision and rejects interference in its sovereignty or the choices of its people," it said. And Saied, referring to Tunisia’s Ottoman past, said his country was no longer an Ottoman province and “not waiting for orders from any authority.” The Tunisian people, he added, “will say their word away from any interference.”

Saied had suspended the parliament and the immunity of its members and dismissed the government in July 2021 following a wave of anti-government protests. Soon after, he issued a decree expanding his executive powers. In February, Saied dissolved the Supreme Judicial Council and appointed a temporary replacement for the body. He had criticized the council for delaying investigations into political assassinations in the wake of the 2011 popular rising that had led to Ennahda’s ascent to power, protecting figures affiliated with Ennahda and impeding efforts to stamp out corruption.

In a countermove March 30, more than a half of the suspended parliament’s members held an online session to vote through a bill repealing the president’s extraordinary executive decrees. Saied immediately convened a meeting of the National Security Council, at which he announced the dissolution of the legislature for what he called a “coup attempt.” The deputies faced a probe on charges of conspiring against state security.

Under a roadmap that Saied announced last year, Tunisia is expected to hold a referendum on a draft new constitution on July 25 and then parliamentary polls in December. Tired of corruption and economic woes, many Tunisians had initially supported Saied’s moves, but the president has come under mounting criticism that he is becoming a new autocrat.

Ennahda, which was part of the government that Saied dismissed and had the largest number of seats in parliament, has said it will boycott the referendum and the elections.

Given Ennahda’s ideological affinity and close ties with Erdogan’s Justice and Development Party, the political crisis in Tunisia holds the potential to hit Turkish-Tunisian relations. The Brotherhood’s ouster in Egypt in 2013 had opened deep rifts between Ankara and Cairo, which have yet to be healed. Ankara and Tunis had so far refrained from steps that could cause lasting damage to their ties. But now that Ennahda faces the risk of political isolation as a result of the transformation that Saied seeks, Ankara is growing concerned that it could lose Tunisia as well.

Meanwhile, the U-turns that Ankara has recently made to ease tensions with regional countries have disappointed Erdogan’s Islamist supporters. Hence, he might have felt compelled to break his silence on Tunisia in a bid to refresh his leadership credentials, both at home and abroad.

In a string of backpedaling moves, Erdogan has reconciled with the United Arab Emirates (UAE), which he had accused of financing the 2015 coup attempt in Turkey; forced the Brotherhood’s Istanbul-based TV channels to tone down their criticism of Cairo; and accorded a warm welcome to Israel’s president in Ankara. Eager to reconcile with Saudi Arabia as well, Turkey last week halted the trial of 26 Saudi nationals over the gruesome murder of Saudi dissident Jamal Khashoggi in Istanbul and handed the case over to Riyadh.

Yet Erdogan’s criticism of Saied might make things even harder for Ghannouchi, who has been accused of using his role as parliament speaker to collude with Turkey and Qatar and advance the Brotherhood’s transnational agenda. Tunisian anti-terror police questioned Ghannouchi April 1 on charges of having plotted against state security. Erdogan’s criticism, widely seen as an attempt to save Ennahda, might backfire also by influencing skeptics to back Saied’s roadmap.

That Tunis responded sternly to Erdogan while mostly fudging over the reactions of other countries indicates that the row has domestic political implications. Erdogan is seen as a leader who could embolden Ennahda, and his comments rekindled debates targeting the party. Arab media accompanied their coverage of Erdogan’s comments with the following remarks of Ghannouchi: “We are not isolated from the world. We have inter-parliamentary relations and friends around the world. We are in contact with all parties with whom we share objectives.” While Ennahda’s ties with Turkey and Qatar are constantly evoked, some media outlets have gone as far as to report the outlandish claim that the Brotherhood had asked the Turkish military to intervene to overthrow Saied.

Al Arab newspaper opines that Erdogan has bowed down to Egypt, the UAE and Saudi Arabia and is now extending a helping hand to Ghannouchi to reburnish his image as the defender of Islamist causes. According to the paper, he has reverted to his old style of interfering in Arab domestic affairs by replacing Egyptian President Abdel Fattah al-Sisi with Saied as his target.

Zouhair Maghzaoui, secretary-general of Tunisia’s People’s Movement party, sees Turkey as the “last card” of Tunisia’s Islamists in their quest for external support. “Erdogan’s statements are part of his Muslim Brotherhood ties in the region and in response to demands by the Ennahda movement, given that Tunisia is the last stronghold of Islamists in the region,” he said. For Tunisian analyst Nabil Rabhi,  Erdogan “wants the Brotherhood's return to power.”

In defiant remarks April 9, Ghannouchi said Tunisia was in the grips of “an unprecedented crisis reinforcing a dictatorial regime that has seized all power.”

The row has triggered also calls to boycott Turkish goods in Tunisia. Some observers argue that Tunisia should review or freeze its 2004 free trade agreement with Turkey because it has favored Turkish interests. Turkish goods have flooded the Tunisian market and dealt blows to local producers, they note, stressing that Tunisia’s trade deficit with Turkey is the third largest after its trade deficits with China and Italy.

Turkey’s diplomatic tensions with Tunisia could cast a pall also on its efforts for normalization with Arab heavyweights.

For Egypt, which has shown no hurry to advance the normalization offer that Turkey made last year, Ankara had to be put on a test to show commitment on non-interference and ending support for the Brotherhood. And though Erdogan has shown willingness to give concessions on the Brotherhood, Cairo has remained rather cool to the Turkish leader. Erdogan might feel frustrated and reckon that he has no reason to soften further now that the Ukraine crisis has helped him break his isolation on the Western front as well. In sum, the latest episode with Tunisia suggests that Erdogan would not easily part with his old habits or turn his back on the Brotherhood unless he gets a meaningful response from the governments with which he seeks normalization.