While AKP officials have denounced the Tunisian president's sacking of the prime minister and suspension of parliament as a "coup," Ankara’s language was markedly less incendiary than when Egyptian President Abdel Fattah al-Sisi overthrew the country’s popularly elected president in 2013. 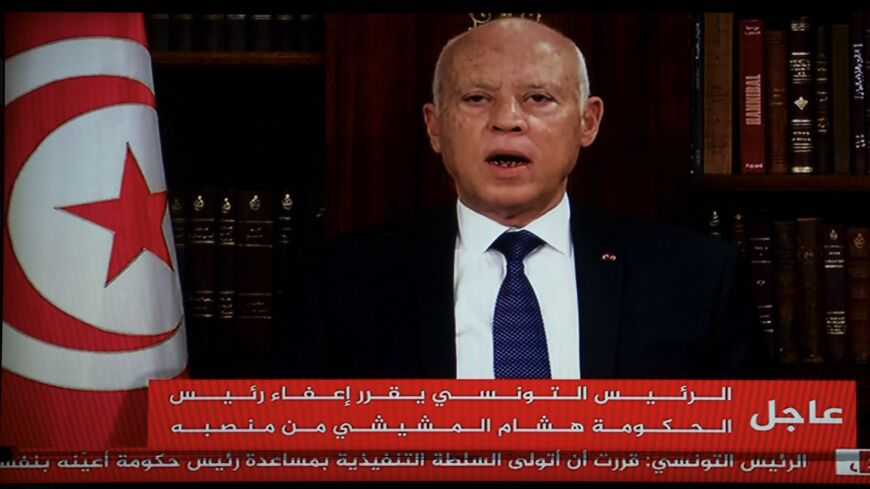 In a photo taken from the TV station of President Kais Saied, the president announces the dissolution of parliament and Prime Minister Mechichi's government on July 25, 2021, at Carthage Palace after a day of nationwide protest. - FETHI BELAID/AFP via Getty Images

Turkish officials have condemned Tunisia’s president over his stunning power grab — sacking the prime minister, suspending the parliament and the immunity of all lawmakers, and appointing himself prosecutor-general late Sunday — with members of Turkey’s ruling Justice and Development Party (AKP) calling the moves a “coup.”

Kais Saied, a former constitutional law professor and a political novice who was elected in a landslide in 2019 amid mounting frustration over rising poverty, joblessness and massive corruption, acted following a wave of anti-government demonstrations over mismanagement of the coronavirus pandemic. He is believed to have the backing of Tunisia’s armed forces. Under Tunisia’s post-revolutionary constitution adopted in 2014, the president is their commander in chief.

The AKP has very close ties with its ideological twin — Tunisia’s largest party, Ennahda — which shares power in Tunisia’s fractious coalition government and whose leader, Rachid Ghannouchi, is speaker of the parliament.

Ghannouchi has been keeping vigil outside the Tunisian parliament, saying Saied had mounted a coup against Tunisia’s constitution and its 2011 Jasmine Revolution. He has called on the people to resist, but supporters of the government, led by ousted Prime Minister Hichem Mechichi, faced those who welcomed Saied’s intervention, sparking fears of a bloody confrontation. Tunisia’s main political parties have denounced Saied.

AKP spokesperson Omer Celik said in a series of tweets that Saied’s actions were “illegitimate” and had no constitutional legitimacy. “Those who inflict this evil on our brothers and sisters, the people of Tunisia, are harming their own country,” Celik said.

Justice Minister Abdulhamit Gul tweeted, “The suspension of the parliament and the dismissal of the government in Tunisia are worrisome for law and democracy.”

Deputy AKP chairperson Numan Kurtulmus, presidential spokesperson Ibrahim Kalin and parliament speaker Mustafa Sentop were among those who called for Tunisia’s democracy to be restored “without delay.”

The Turkish Foreign Ministry said it was “deeply concerned” about the suspension of Tunisia’s parliament, which represents “the will of the people.” The AKP, which survived a bloody coup attempt in 2016, is understandably spooked.

Turkish President Recep Tayyip Erdogan, who led public rallies in the late Morsi’s defense, had not yet commented on the events unfolding in Tunisia as of the time of publication of this article.

The restraint may be explained in part by Ankara’s recent efforts to repair ties with Egypt, Israel and other regional neighbors, with whom it’s at odds notably because of its support for their Muslim Brotherhood foes and Hamas — but also over Libya.

Tunisia’s secular opposition parties have accused Ghannouchi of secretly conspiring with Erdogan in aid of Libya’s former Government of National Accord that was led by figures sympathetic to the Muslim Brotherhood. Libya’s current interim prime minister, Abdulhamid Dbeibeh, also has good ties with Turkey.

Ankara’s military intervention in 2020 prevented eastern warlord Khalifa Hifter, who was backed by France and the United Arab Emirates, from seizing control of Tripoli.

In a surprise visit to Tunis in December 2019, Erdogan is believed to have sought Saied’s support for routing Turkish forces and military equipment to Tripoli via Tunisia, only to be rebuffed. In early 2020, pro-government Turkish outlets began publishing claims that the UAE was orchestrating a smear campaign aimed at removing Ghannouchi from power.

Similar claims were echoed in the wake of Saied’s suspension of the parliament. “It has emerged that France and the UAE are behind the events that took place in Tunisia,” online news outlet En Son Haber asserted.

Tunisia’s powerful General Trade Union, the UGTT, which has been strongly critical of Turkish meddling, has reacted cautiously to Saied’s decisions. In a statement on its Facebook page, the 1 million-member syndicate did not criticize the president but instead emphasized “the need to ensure respect for the constitution, the continuation of the democratic path, the restoration of stability to the country and the restoration of its capacity for construction and progress.”

“Tunisia has been at an impasse for a while, struggling with a cruel economic and fiscal crisis combined with a terrible third wave of COVID-19 deaths that have choked its vital tourism industry. Yet the dominant narrative places most of the blame on Tunisia’s political Islamists who — without being blameless — aren’t single-handedly responsible for the general mess,” said Jalel Harchaoui, a senior fellow at the Geneva-based Global Initiative against Transnational Organized Crime and an expert on North Africa.

“But regardless, demonization of Ennahda is gaining traction, narrative-wise, beyond Tunisia’s borders. In Libya, the pro-Hifter media outlets — many of which are based in Dubai and Amman — are elated, applauding and cheering yesterday’s constitutional coup,” Harchaoui added. Libya is Tunisia’s largest trading partner.

Paradoxically, the changes in Tunisia may be good for Erdogan’s allies in the interim government in Libya, who are supposed to step down following elections that are scheduled to be held in December 2021. “The Tunis crisis creates an anti-democracy atmosphere wherein it will be more difficult for various actors, including internationals, to demand elections in December 2021,” Harchaoui said.