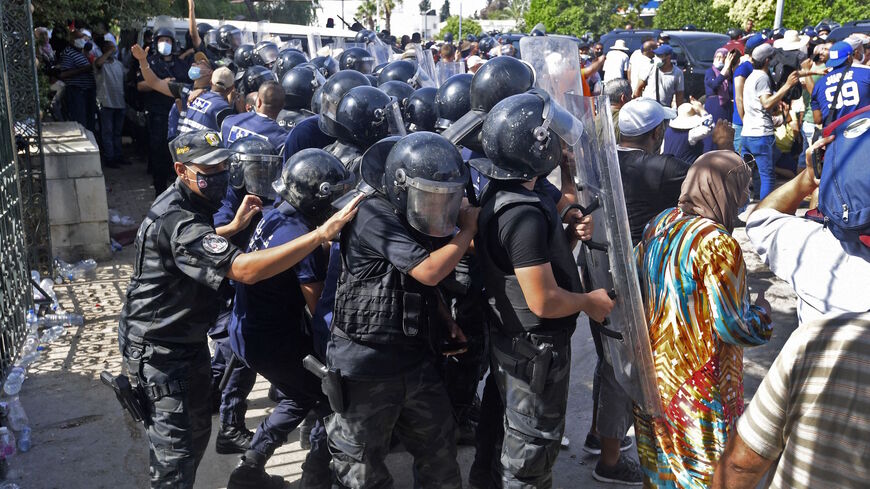 Tunisian security officers hold back protesters outside the parliament building in the capital, Tunis, on July 26, 2021, following a move by the president to suspend the country's parliament and dismiss the prime minister. - FETHI BELAID/AFP via Getty Images

A day after President Kais Saied staged what critics called a coup, police in Tunisia have stormed the Al Jazeera office in the capital city and Tunisian troops have surrounded the parliament.

Al Jazeera journalists in Tunis said at least 20 heavily armed police officers raided the office and confiscated their equipment on Monday. The officers reportedly lacked warrants but said they were acting on the orders of the Tunisian judiciary.

“They prevented the staff from even taking their personal belongings,” said Al Jazeera’s bureau chief Lutfi Hajji. “Security forces are surrounding the office.”

Reporters Without Borders tweeted that it “denounces the closure of Al Jazeera's office in Tunis by security forces & calls on the authorities to respect press freedom and pluralism.”

Late Sunday, the Tunisian president announced he was sacking Prime Minister Hichem Mechichi as well as suspending parliament for 30 days or “until the situation settles down.” Saied also stripped lawmakers of their immunity and said he would be assuming executive authority.

"We have taken these decisions … until social peace returns to Tunisia and until we save the state," Saied said in a televised address Sunday.

He described his actions as in line with an emergency article of the Tunisian Constitution and said they would be “temporary measures.” He has not yet named a new prime minister.

The moderate Islamist political party, Ennahda, called the move “a coup against Tunisian democracy and its constitution.” On Monday, Tunisian troops deployed to the parliament blocked parliament speaker and Ennahda leader Rachid Ghannouchi from entering.

Saied’s announcement followed widespread protests over the government’s handling of the coronavirus crisis. Tunisia, which has one of the world’s highest per capita death rates from COVID-19, has fully vaccinated just 7% of its population of 11.7 million. The death toll from the virus has topped 18,000.

Tunisia’s current tumult comes a decade after the uprising that toppled Tunisia’s longtime dictator, Zine El Abidine Ben Ali, and set off the region’s revolutions. Once held up as the Arab Spring’s sole success story, Tunisia has since experienced nine governments. Here’s a look at key events leading up to the latest political crisis.

October 2011: Moderate Islamist party Ennahda, which was banned under Ben Ali’s regime, wins the most seats in elections for Tunisia’s new 217-member assembly.

February 2013: The assassination of secular politician Chokri Belaid, who was an outspoken critic of Ennahda, triggers riots across the country.

January 2014: The parliament adopts a new constitution that is seen as one of the Arab world’s most progressive.

May 2017: Tunisians protest a controversial bill that would give amnesty to businessmen and officials accused of corruption during Ben Ali’s regime.

July 2020: Less than five months after he forms a government, Prime Minister Elyes Fakhfakh resigns over conflict of interest violations.

July 2021: Saied is accused by his opponents of an attempted coup after he fires Mechichi and suspends the parliament in the wake of violent protests.