Tunisia's largest party, Ennahda, is accused of accepting funding from abroad for its political campaigns, as political turmoil continues in the North African country. 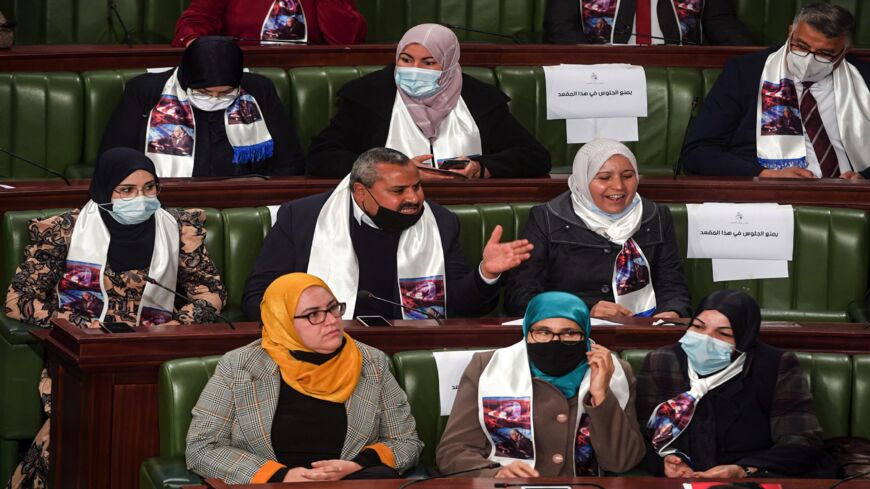 Members of the Ennahda Islamist bloc attend a parliamentary session ahead of a confidence vote on the new government reshuffle by the prime minister at the Tunisian Assembly headquarters in the capital Tunis on January 26, 2021. - FETHI BELAID/AFP via Getty Images

A Tunisian prosecutor announced an investigation into three political parties on Wednesday, including the Islamist Ennahda party. Tunisia has been gripped by political turmoil since the president sacked the government over the weekend.

Spokesperson for state financial prosecutors Mohsen Daly said that Ennahda, Heart of Tunisia and the Aish Tounsi group are under investigation for obtaining foreign funding for their electoral campaigns, the Tunisian news outlet Mosaique FM reported. The news was widely reported in Tunisian media.

On Sunday, Tunisian President Kais Saied dismissed Prime Minister Hichem Mechichi and suspended parliament for 30 days. Ennahda is the largest party in the parliament. Mechichi, though independent, is supported by the moderate Islamist party. The move led to national and international concerns that a coup had taken place.

Tunisia is now in a state of political chaos, which coincides with a fledgling economy and rising COVID-19 cases. There were widespread protests on Sunday amid Saied’s actions, with some ransacking Ennahda’s regional offices. Some Tunisians accused the president of pulling off a coup, while his supporters referred to the event as a “second revolution.”

Ennahda has been a controversial player in Tunisian politics since ascending in the aftermath of the 2011 revolution that toppled long-time ruler Zine El Abidine Ben Ali. Ennahda leader and speaker of parliament Rachid Ghannouchi has referred to the party as “Muslim democrats” as opposed to Islamists, indicating support for Tunisia’s democratic transition. Critics of the party, including those in the Gulf, deride Ennahda as being affiliated with the Muslim Brotherhood and Qatar. Tensions have been high between secular and religious parties in the country recently and in general since the 2011 uprising.