Tunisia’s President Kais Saied has announced plans for a new constitution and a different system of government, which raises concerns among political and human rights circles about the possibility of imposing a dictatorship in the country. 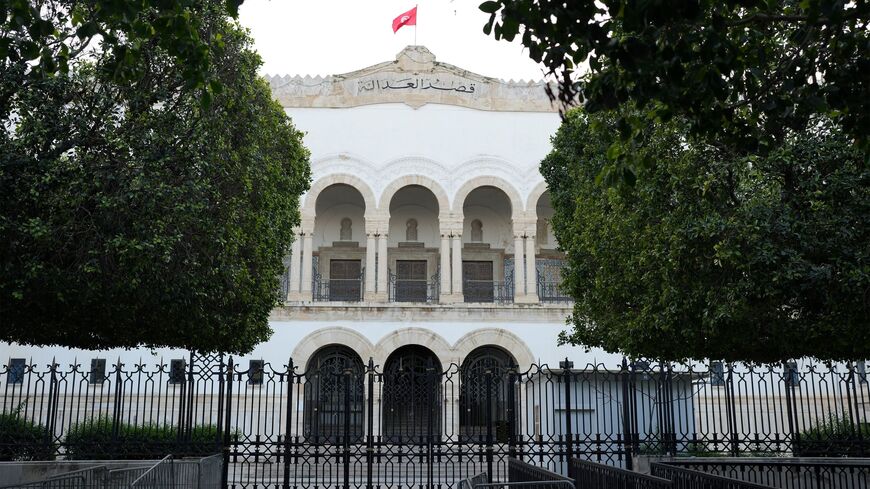 The Tunisian Court of First Instance is shown with barriers erected on February 20, 2022 in Tunis, Tunisia. Tunisians took to the streets in protest of a controversial new law extending power by President Kais Saied over the country's judiciary system, a move seen as a democratic setback in a country that is considered the cradle of the Arab Spring revolutions. - Séverine Sajous/Getty Images

TUNIS — Tunisian President Kais Saied stated on May 4 that an advisory national committee will be formed to establish a new republic in Tunisia.

On Eid al-Fitr on May 1, Saied announced that a committee has been formed to draft the constitution of a “new republic,” and will complete its work within a few days.

Also, he said, a body has been assigned to prepare for a national dialogue — which will include only those who supported the July 25, 2021 process, and exclude those whom he described as “traitors and non-patriots,” referring to the Islamist Ennahda movement that won 52 out of 217 seats in the 2019 legislative elections.

In response, the Tunisian General Labor Union (UGTT), Tunisia’s largest trade union, on May 6 stressed the need to conduct a real, direct, and broad dialogue with no decisions set in advance. The statement reiterated the UGTT’s “rejection of any useless and conditional formal dialogue that marginalizes the active national political and social forces."

The pro-Saied Tunisian Popular Current (Tayyar Chaabi), however, called for drafting a new constitution that guarantees the rights and freedoms of the Tunisian people, focuses on the separation of powers, and approves a presidential system with guarantees to prevent irregularities in power.

The party also urged expediting the work of the parliament’s legal committee, given the upcoming popular referendum on political reforms set for July 25.

Osama Oweidat, of the pro-Saied Echaab (People’s) Movement, which has yet to officially comment on Saied’s latest announcement, told Al-Monitor that the new republic must be based on breaking with the entire system before July 25, 2021.

He said that the parties that Saied excluded from the discussions had disrupted the democratic process and harmed the Tunisian democratic experience, which was practically the only successful Arab Spring revolution.

Meanwhile, Khelil Ezzaouia, secretary-general of the Ettakatol party, told Al-Monitor that the president wants to establish a third republic without involving the various parties in the political process.

Ezzaouia said that since not all forces are participating in the political process, that raises concerns about establishing an authoritarian regime, and Tunisia may thus fall back into the dictatorship that ruled the country from 1959 until the 2010 revolution.

In a May 4 Facebook post, Ghazi Chaouachi, Secretary-General of the Attayar Democratic Party, strongly warned against “organizations, associations, institutions, and figures that intend to contribute directly or indirectly to changing the constitution of the Tunisian state from inside the dark rooms.” Chaouachi noted that Saied's plan “would change the state and push people to fight and sow chaos in the country.”

The opposition Aljoumhouri Party said in a statement published on its Facebook page on May 3 that Saied had completely abandoned his symbolic role in uniting and representing Tunisians. The party believes that Saied’s restrictions on participation will have dire consequences.

Ahmed Najib Chebbi, head of Al Amal Party, told Al-Monitor that Saied is carrying out a coup against constitutional legitimacy, constitutional institutions, and the constitution itself, because he used the military judiciary to try civilians, and he referred 121 MPs to the judiciary on serious charges for exercising their right to expression.

He added that Saied seized all powers, dissolved the government and parliament, and gave himself all the powers granted by the constitution through unconstitutional decrees, which threatens the democratic transition in Tunisia.

Chebbi, a prominent political opponent of the regime of late Tunisian President Zine El Abidine Ben Ali, had announced on April 26 the establishment of a political opposition front to “save” the country from a deep political and economic crisis, and address the dictatorship project led by Saied.

Meanwhile, Ennahda stressed in a May 5 statement its “rejection of the estrangement in building a modern state,” and strongly warned against dismantling state institutions and its dangerous repercussions on Tunisia’s political and societal stability.

Ibrahim al-Omari, a professor of political science at El Manar University, told Al-Monitor that Saied is seeking to abolish the constitution and establish a presidential system that replaces the parliamentary system. He described this as a trend toward an absolute one-man rule system that puts an end to democracy.

The head of the Tunisian Observatory for Human Rights, Mostafa Abdelkebir, wrote in a Facebook post on May 6 that the constitution is drafted by institutions, not by people, and the current “constitution was written historically with the blood of Tunisians.”