Tunisian President Kais Saied announced yet another set of measures for holding a referendum on constitutional reforms and parliamentary elections. 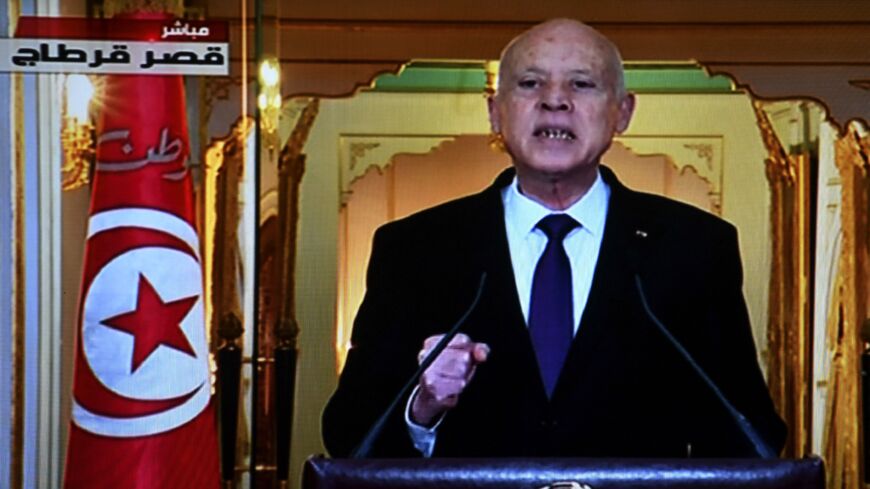 This picture taken on Dec. 13, 2021, shows a TV screen in Tunisia's capital, Tunis, displaying an announcement by Tunisian President Kais Saied, in which he said that the Tunisian parliament would remain suspended until elections set for December 2022 are held and that a referendum on constitutional reforms would be held in July of that year. - FETHI BELAID/AFP via Getty Images

TUNIS — Tunisian President Kais Saied announced in a Dec. 13 speech to the Tunisian people that the Tunisian parliament, suspended since July 25 by presidential decree, will remain suspended until legislative elections are held on Dec. 17, 2022. He also announced a three-month popular consultation with the Tunisian people via electronic and direct platforms from Jan. 1 to March 20 in order to draft constitutional reforms based on popular propositions.

Saied indicated that any constitutional reform projects will be put to a referendum on July 25. He further stated that early legislative elections will be organized based on the new electoral law.

The president also announced reforms to the penal code. He stressed that the first individuals to be held accountable would be those involved “in cases that affect the state.”

He called for the prosecution of all those who have committed crimes against the Tunisian state and continue to do so.

Saied’s decisions sparked controversy in Tunisia among the political actors. Representatives of the Democratic Current, the Republican Party and the Democratic Forum for Labor and Liberties announced in a joint press conference on Dec. 14 that they would march in the capital to protest against what they considered “a coup on the part of the president of the republic.”

They said the decisions were illegal and aimed at extending autocracy.

The Republican People’s Union Party said in a Dec. 14 statement that the president had usurped power, lost his legitimacy, and should be dismissed and brought to trial for turning against the constitution and committing high treason. The statement also called to consider the seat of the presidency of the republic as vacant.

The party also called for the formation of a national salvation government and the swift formation of a Supreme Council for the parties rejecting the coup. It claimed that the current government is illegitimate and in violation of the constitution.

In its own Dec. 14 statement, the political bureau of the Social Democratic Path Party said, “The president’s autocratic behavior has been entrenched throughout the formulation of the aspects of the coming period amid the absence of a participatory approach and the exclusion of organizations and political parties.”

He pointed out that its goal is to change the political and electoral system.

Basbas stressed that most political actors oppose the announced measures and noted that the electronic referendum method is new and tricky to the Tunisian people, as it’s not accessible to all. Also, he added, the legal framework of the referendum remains vague.

While the Ennahda movement had previously warned of the dangers of repealing the current constitution, it has yet to announce its official position on Saied’s recent measures.

Political analyst Boulbaba Salem told Al-Monitor that Saied's decisions are a message to the world that there are time limits that he will abide by in order for the country to return to its normal course. He pointed out that the time limits he set were met with opposition in Tunisia, as they infer another year of unilateral rule, and this comes in contradiction with the principles of democracy entrenching the separation of powers.

He expects the country to witness an increase in the frequency of protest movements. At the political level, Saied grew the opposition base against him by making unilateral decisions without consulting with other local parties.

Salem said the president’s project is very dangerous, as it entrenches autocracy.

The Tunisian Popular Current (Tayyar Chaabi) said in its Dec. 14 statement that Saeid's measures aimed at dismantling the system of corruption and terrorism while setting the stage for a country built on sound political foundations.

Osama Oweidat, a member of the political bureau of the People’s Movement, told Al-Monitor that what Saied said is positive and consistent with his movement’s position.

Oweidat said that Saied has rectified the course of the revolution that started on Dec. 17, 2010, from Sidi Bouzid, as a result of the political assassinations that Tunisia experienced in 2013 and that the Ennahda movement is accused of masterminding. The revolution also erupted as a result of the high cost of living and the protest movements.

Meanwhile, US State Department spokesperson Ned Price said in a Dec. 15 statement, “We welcome President Saied’s announcement of a timeline outlining a path for political reform and parliamentary elections.”

Price indicated that they “look forward to a reform process that is transparent and inclusive of diverse political and civil society voices. The United States supports the aspirations of the Tunisian people for an effective, democratic and transparent government that protects rights and freedoms.”

Journalist and political analyst Basil Turjuman told Al-Monitor that the president’s decisions were expected and are in line with the general context that the president had previously talked about. The president had explained that during his presidency, he’ll make sure to do the necessary changes so that Tunisia can uphold the rule of law and democracy in its political process and governmental departments. He wanted to eradicate corruption, and in his opinion, this is the way to do all of that.

He said that the president wants to avoid having parliament monopolized by political parties that did adhere to democratic processes.

Tunisia has been in a state of political crisis since last July 25, when Saied began to take the exceptional measures of freezing the powers of parliament, lifting parliamentary immunity, abolishing the body established to monitor the constitutionality of laws, issuing legislation by presidential decrees, dismissing the prime minister and appointing a female prime minister to form a new government.