Political crisis in Tunisia reflected in the streets

The battle for power between Tunisian President Kais Saied and the parliament headed by Rashid Ghannouchi is escalating and has moved to the street. 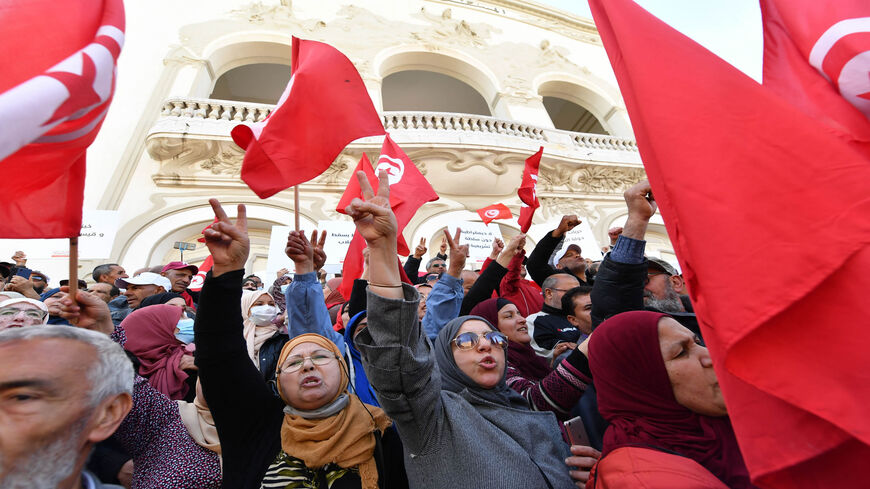 Tunisians raise national flags as they take to the streets of the capital to protest against their president, Tunis, Tunisia, April 10, 2022. - Fethi Belaid/AFP via Getty Images

TUNIS, Tunisia — Tunisia has been grappling with protest movements sweeping across the country since last year. Some of these protests come in support of President Kais Saied’s decisions taken since suspending parliament on July 25, 2021 — and more recently dissolving it — a move he said should be followed by early parliamentary elections; while others oppose them and support the parties that reject them. Chief among these are the Islamist Ennahda party and the lef-wing Workers Party.

On April 17, dozens of people and representatives of human rights organizations staged a protest in Sfax governorate, southeast of the capital Tunis, as they denounced the deterioration of the Tunisians’ purchasing power and the inflation that resulted from what they labeled as the “July 25 coup.”

This coup, they say, has further worsened social conditions. The protesters said that Saied and his supporters seek to hold on to the centers of influence, establish a one-man rule and entrench open dictatorship.

A number of citizens as well as some representatives of parties and human rights organizations participated in another protest April 9 in Tunis, drawing a heavy security presence. The protest was held to commemorate Martyrs Day and to demand the “return of the constitutional path” in the country.

Protesters chanted several slogans against Saied, such as “The people want what you don’t want,” “Down with the coup,” “Constitution, Freedom, National Dignity” and “We sacrifice our soul and blood for you, Oh flag.”

Meanwhile, representatives of several movements supporting the president and his July 25 measures organized a sit-in April 6 in front of the Turkish Embassy in Tunis, denouncing a statement issued earlier by Turkish President Recep Tayyip Erdogan. On April 4, Erdogan expressed his regret over the dissolution of the parliament.

On March 30, Saied announced his decision to dissolve the assembly and launched an inquiry against the members of parliament who attended a virtual session of the suspended parliament to revoke Saied’s decrees.

Political analyst Boulbaba Salem told Al-Monitor that Tunisian political parties have resorted to the street to resolve their battles as the constitutional institutions — namely the Constitutional Court tasked with resolving contentious issues between parliament and the presidency over their constitutional prerogatives — have failed to do so.

Salem said that resorting to the street to resolve differences is a kind of political pressure aimed at proving the popular legitimacy of each party.

He pointed out that the weak Tunisian democratic culture is responsible for the demonstrations that the Tunisian street has been witnessing since July 25, 2021.

Salem noted that politicians are using the street card to show that their parties still enjoy wide popularity, as evidenced by the number of demonstrators. Such a step is also intended as a message to the international community whereby there are people who support Saied’s decisions and others who reject them.

Thousands of demonstrators who rejected Saied’s decision to dissolve parliament held a rally March 20, calling for the president’s removal and chanting the slogan, “The people want what you don’t want.” They also denounced the current social and economic conditions in Tunisia and blamed the current authorities for them.

Thousands of demonstrators took to the streets on Oct. 3, 2021, to express their support for the Tunisian president, denounce the failed years of rule that followed the 2011 revolution and demand investigations into political corruption.

Zuhair al-Maghzawi, secretary-general of the People’s Movement, which supports Saied, told Al-Monitor that the opposition parties, led by Ennahda, are trying to change the balance of power through the street, and they are trying to flex their muscles by taking to the streets and demonstrating against the president.

Maghzawi said that the opposition is grappling with the situation and the only choice it has left is the street to try to return to power.

Ennahda spokesman Fathi al-Ayadi told Al-Monitor that the street is a political tool, and that Tunisia is going through an exceptional democratic situation. He noted that the political parties are in a clear battle against the president’s measures exemplified by the dissolution of parliament to have the upper hand.

He said that the demonstrations against Saied are not a show of force but rather a reiteration that the Tunisian street has demands to achieve.

Saied had taken a number of measures on July 25, 2021, chief among these included suspending the parliament. He subsequently dissolved parliament and dismissed the government following widespread protests across the country that called for the dissolution of parliament and for the regime that took power since the 2011 revolution to be held accountable.

One day after the July 25, 2021, announcement, supporters of both Saied and of Ennahda and its allies gathered in front of parliament. While some called for the dissolution of parliament and for accountability, others called for respecting the constitution and democracy. Clashes erupted between the rival protesters, with some injuries reported.

On Sept. 26, 2021, the capital witnessed skirmishes between a number of protesters rejecting the exceptional measures approved by Saied and a number of supporters of such measures, as the two sides exchanged water bottles and security intervened to separate them.

Sociologist Sami Nasr told Al-Monitor that 11 years after the revolution, the standards to assess political action have changed and have become dependent on who raises the widest controversy. This has led us to a stage of demonization and counter-demonization, especially considering that each political party seeks to demonize its opponent, and this is what breeds violence.

Nasr stressed that Tunisians have pent-up frustration and are ready to engage in violence at any moment, as a result of years of economic and social crises, the deterioration of their purchasing power and the state of frustration and failure they are experiencing due to their deteriorating social conditions.