Tunisian President Beji Caid Essebsi is threatening to sue the Ennahda political party, which was recently accused of planning in 2013 to assassinate him and the French president. 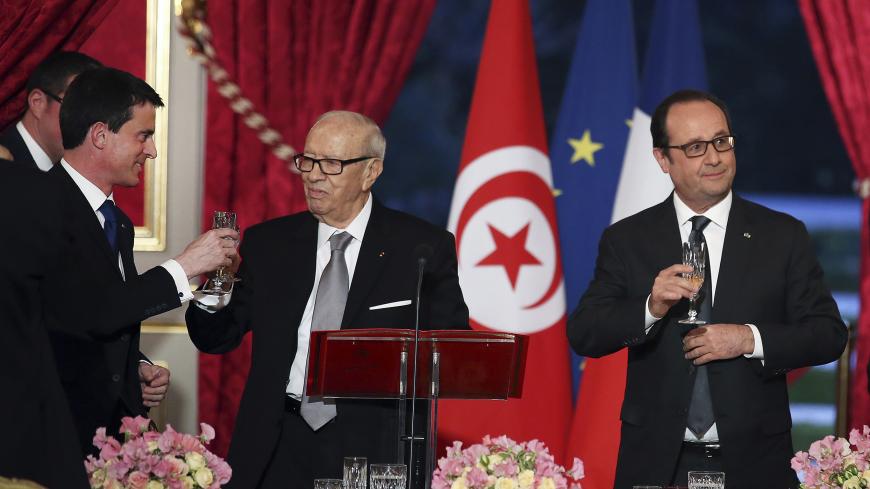 TUNIS, Tunisia — Allegations are flying in Tunisia as the president and a political party have exchanged perceived threats, and a group investigating assassinations dropped a bombshell of speculation.

In a Nov. 29 speech to the Tunisian National Security Council in Carthage, President Beji Caid Essebsi accused the Ennahda political party of personally threatening him. He said he will not let this threat pass and will resort to the judiciary in this regard.

Essebsi was responding to Ennahda’s Nov. 26 statement on its official website warning against the dangers of involving the presidency in judicial affairs, saying that would undermine the judiciary’s independence and place the presidency in the middle of political clashes.

Ennahda had posted the statement just hours after Essebsi met with some members of a group calling itself the "Committee for the Defense of Martyrs Chokri Belaid and Mohamed Brahmi," two politicians who were assassinated in 2013. The committee comprises lawyers who weren't satisfied with the initial investigation and have been pursuing their own probe.

The committee charged in October that Ennahda was not only involved in the assassinations, but that it had formed a secret group that infiltrated state institutions to steal thousands of related documents from the Tunisian Ministry of Interior. The committee is demanding that the judiciary reopen the case.

During the November meeting with Essebsi, the committee revealed new data alleging that Ennahda’s secret organization had also planned in 2013 to assassinate Essebsi and then-President Francois Hollande of France. Ennahda strongly denies the claims. Ennahda spokesman Emad al-Khamiri told Al-Monitor there is no evidence and such accusations only aim to tarnish Ennahda’s reputation.

In its Nov. 26 statement, Ennahda stressed the importance of maintaining the alliance with Essebsi and all political forces.

Khamiri told Al-Monitor that the movement, which has 68 of the 217 parliament seats, believes the presidency is a unified institution for all Tunisians. But unfortunately there are some political parties, which he did not name, that want to drag the presidency into the midst of this political conflict, he added. Khamiri claims the committee for Belaid and Brahmi is a political one, representing the Popular Front (a leftist coalition) but operating under the guise of a defense committee.

Zuhair Hamdi, a deputy with the secular Popular Front party, which holds 15 seats in parliament, told Al-Monitor his party isn't seeking to dissolve Ennahda, but only wants to uncover the circumstances of the assassinations of two of its most prominent leaders. Belaid — founder of the Popular Front party, which opposes Ennahda — was shot dead by anonymous gunmen in front of his Tunis residence Feb. 6, 2013. Five months later, on July 25, 2013, Popular Front leader Brahmi was assassinated the same way.

Rida al-Radawi, a member of the defense committee, told Al-Monitor the chief of the investigation into the assassinations of Brahmi and Belaid had listened Nov. 21 to the security agent who had logged the documents that were found in the "black room" at the Ministry of Interior and who announced there had been a 2013 plan to assassinate Essebsi and Hollande — "before the document related to this scheme was stolen.”

He added that a committee delegation met with Essebsi and demanded formation of a committee headed by a national figure to scrutinize data related to Ennahda’s alleged secret organization and assassination plans. Radawi noted that the delegation stressed the need for the National Intelligence Center to issue periodic reports on this case. The center is in charge of collecting information and coordinating between the various Tunisian intelligence bodies.

Nizar al-Senoussi, a member of the defense committee, told Al-Monitor that Abdel Aziz al-Deghzani, the brother-in-law of Ennahda leader Rachid al-Ghannouchi, was responsible for manufacturing the machine that was used to burn the documents. He has never been heard by the judiciary despite the fact that Mustafa Khadr — who is currently serving an eight-year sentence for the Belaid and Brahmi assassinations and for being affiliated with Syria’s Jabhat al-Nusra (now Hayat Tahrir al-Sham) — had mentioned Deghzani’s name while he was being interrogated.

“Ennahda, and Ghannouchi in particular, sacrificed Khadr to conceal the identity of Ghannouchi's brother-in-law, as well as to hide the identity of Reda Barouni, who served as Ennahda’s administrative and financial official at the time,” Senoussi said.

Political analyst Yusuf al-Waslati told Al-Monitor that if the judiciary produces evidence of Ennahda involvement in political assassinations, there would be a demand to dissolve the group, which would cause an earthquake on the political scene.