During its most recent congress, Tunisia’s Islamist Ennahda party announced its intention to separate its political and religious work. 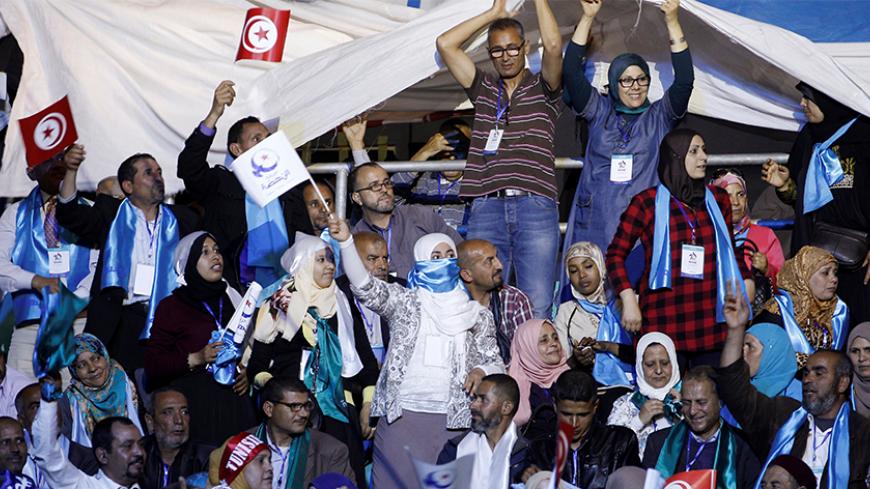 Supporters of the Ennahda movement hold flags during the movement's congress in Tunis, May 20, 2016. - REUTERS/Zoubeir Souissi

TUNIS, Tunisia — On May 20, the Tunisian Ennahda movement kicked off its 10th congress at the Rades Olympic Hall in a southern suburb of Tunis. About 13,000 people, among them 1,200 delegates, filled the stadium, largely considered one of the architectural achievements of the autocratic Zine El Abidine Ben Ali period (1987-2011); 2,000 more supporters waited outside.

The ambiance was that of a rock concert — crowds cheered wildly, waving Ennahda’s white flag (a few Tunisian and Palestinian flags dotted the stadium), and the party’s theme song blared from the speakers.

It was a historic moment: Ennahda formally announced its intention to separate its political and religious work.

"Ennahda has changed from an ideological movement engaged in the struggle for identity to a protest movement against the authoritarian regime and now to a national democratic party. We must keep religion far from political struggles," Rachid Ghannouchi, the party’s 74-year-old founder and president, declared before the crowd.

Established 30 years prior as the Movement of Islamic Tendency, Ennahda has historically set itself apart as an Islamic party. Though it has not advocated for Sharia or the establishment of an Islamic state in Tunisia, it has been anchored by an ideology that has sought the unification of religion and politics.

Friday’s event was ripe with symbolism that underscored the party’s transition. Nonreligious songs were played, young girls without headscarves took to the stage and, most strikingly, President Beji Caid Essebsi, whose Nidaa Tunis party is secular, was the evening’s guest of honor.

“Ennahda has become a civil party and within our traditions Islam does not contradict democracy,” Essebsi said in his keynote speech to a rather lukewarm audience.

For most of Tunisia’s post-colonial history, however, the state monopolized the definition of Islam, effectively creating a country where secularism in politics was paramount. Until the 2011 revolution that ousted Ben Ali, most of Ennahda’s activities were underground, and many of its top leaders were jailed or exiled to Europe. Ghannouchi himself spent more than 20 years in London.

“This movement started many years ago … against the dictatorship, [in support] of political prisoners and human rights,” party spokesman Oussama Sghaier told Al-Monitor on the second day of the congress.

Ennahda came to power in the country’s first democratic elections, winning 32 out of 33 constituencies across Tunisia, highlighting the party’s appeal across class and environment. Many Tunisians felt that Ennahda, with its religious roots, represented an honest and trustworthy departure from the corruption-stained years of Ben Ali. Early on, Ennahda showed its willingness to compromise, leading a troika government with the Ettakatol and the Congress for the Republic parties.

Despite its popular support, Ennahda proved to be an inexperienced political party. Unemployment persisted, the economy continued to lag and Tunisia’s security situation worsened; there was speculation that Ennahda was not doing enough to combat terrorism. The 2013 assassinations of two prominent political leaders from the Democratic Patriots’ Unified Party, a leftist opposition group, further tainted Ennahda’s image.

In 2014, Ennahda stepped aside and allowed a neutral interim government to take over the final drafting of the new constitution. Nidaa Tunis assumed power following democratic elections. Since January, however, Ennahda has held a majority in parliament, after 22 Nidaa Tunis members resigned amid internal protests.

Ennahda, which skipped its 2014 congress due to presidential elections, is in the process of rebranding its image and making amendments to the party’s structure and internal constitution; for more than two days in the coastal town of Hammamet, delegates deliberated behind semi-closed doors, voting by electronic ballot.

Prior to the congress, Ennahda’s announcement that it would completely disengage religion from its political policies made headlines. There was concern that such a transition would cause internal squabbling within the party or alienate Ennahda’s more militant voter base. But during the congress, party officials repeatedly stressed that Ennahda’s transformation from a religious movement to a political one was “a natural transition."

“Today we have a free country. Civil society is free,” Sghaier told Al-Monitor, when asked why Ennahda was now shedding its Islamic identity. But it is also a move that will allow Ennahda to separate itself from groups such as the Islamic State, which use the label of political Islam to describe their extremist activities.

The numbers show a generally unified front in the face of such drastic rebranding: 80.8% of delegates voted in favor of separating the relation between political and social work, and 87.7% voted in favor of the intellectual vision of the party. Ghannouchi, widely considered the architect of this rebranding, rewon his presidency with relative ease, capturing 800 votes, or 75% of the delegates, confirming Ennahda’s commitment to their founder.

But for many Tunisians, the most salient issues at stake are not related to religion. Unemployment, education, economy and security are the dominant factors plaguing Tunisian society. Ghannouchi addressed these concerns in his Friday speech, reaffirming Ennahda’s collaboration with the government in the face of terrorism and calling for “an urgent economic recovery program” that would include vocational training and sports and culture centers in disenfranchised parts of the country.

And despite a unified front on rebranding, there were some issues that frustrated delegates, such as quotas on female seats in the congress. Some delegates wanted up to 50% of the congress to be filled with women; the seats were debated down to 10%.

When asked if she was satisfied with the quota, congresswoman Sayida Ounissi affirmed her discontent. “Absolutely not,” she told reporters on Sunday, in between debates.

Another contentious issue was the role of the Shura Council, the party’s highest authority, in voting members to the party’s executive board. After hours of deliberation, 58% of the delegates voted in favor of the president appointing the board. Members must be validated by the council, which will also hold veto power. The move will slightly limit the powers of the president.

Such restructuring and rebranding are seen as key steps prior to the country’s local elections in 2017. Tunisia will hold its next presidential elections in 2019. Ennahda, with Ghannouchi still at the helm, hope to reclaim the power it first won in 2011.