Tunisia's next elections will put governing alliance to test

After the founder of the secularist Nidaa Tounes Party Tunisian President Beji Caid Essebsi expressed his disappointment toward Islamist ally Ennahda, talk is growing about the future of the alliance between the two. 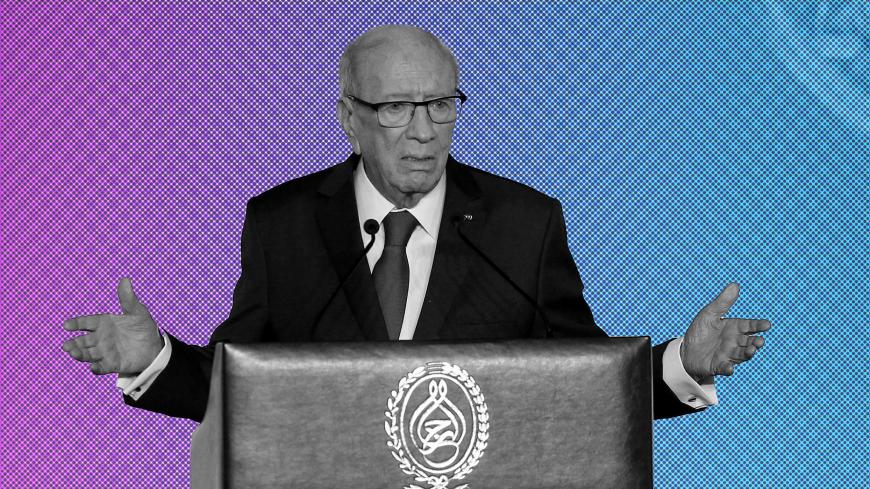 In a Sept. 5 interview with the Tunisian state paper Essahafa, Tunisian President Beji Caid Essebsi revealed in a surprise statement that he was disappointed with his Islamic allies in power. Speaking about his alliance with the Ennahda movement, he said, “We thought we could at least draw Ennahda to the civic arena, but it seems that we were wrong in our assessment."

After a three-year alliance between Essebsi’s Nidaa Tunis party and the Islamic Ennahda, the president is no longer convinced that the movement has turned into a civic party.

Although Ennahda did not offer an official response to the president’s statement, the movement’s leader, Abdelkarim Harouni, said in a press statement reported by the local news website al-Jarida on Sept. 7 that “Ennahda and Nidaa Tunis have chosen consensus and will remain on the same page.”

This is why some observers might assume that the president’s statements, regardless of how important they were, might not really affect the future of the alliance between the two parties.

In this context, Karim Yahya, a correspondent for the Tunisian newspaper al-Ahram, told Al-Monitor, “This consensus or alliance between Nidaa Tunis and Ennahda continues to grow stronger, as we have seen in the vote over the Administrative Reconciliation Act regarding employees and businessmen accused of corruption.”

On Sept. 13, the Tunisian parliament ratified the Administrative Reconciliation Act, which grants judicial amnesty to dozens of senior state employees and businessmen who are associated with former Tunisian President Zine El Abidine Ben Ali’s regime and accused of administrative and financial corruption.

The act was approved by 117 votes, most of which were from the Nidaa Tunis and Ennahda blocs, while one member of parliament refused to vote and nine voted against.

Yahya added, “It [the alliance] also seemed evident in the formation of [Prime Minister] Youssef Chahed’s new government, which adopted a … program that is reflected in the economic and social programs of both parties and the long-term pragmatic nature of the conduct of both parties' leaderships.”

Following the Cabinet reshuffle Sept. 11, Ennahda maintained the number of ministries it held in the government of national unity. It still has eight members of the government, including ministers and state secretaries, while Nidaa Tunis has 12 members out of 42 ministers and state secretaries in the Cabinet, as it was the winning party in the October 2014 legislative elections.

He added, “In addition, there is US-European support for the so-called consensus path between the two parties that dominate the government, the parliament and the overall political life. There is a Western desire to integrate the so-called democratic Islam into the political game and governance of the southern Mediterranean.”

Both the Nidaa Tunis and Ennahda blocs constitute the majority in parliament. The Ennahda bloc includes 69 deputies, while the Nidaa Tunis bloc comprises 56 deputies. The alliance between the two movements started to take shape in the wake of the 2014 legislative elections and, together with the two liberal parties, Afek Tounes and the Free Patriotic Union, formed a coalition government.

Yahya continued, “It seems clear that the so-called conflict over issues regarding personal status, endowments and the relationship between religion and the state is not a priority [for now] compared to the alliance between the two parties. Ennahda’s great dilemma is that it is keen on maintaining its alliance with Nidaa Tunis, although [Ennahda] considered [Nidaa Tunis] before the 2014 elections as nothing but a reproduction of the Democratic Constitutional Rally of former President Zine El Abidine Ben Ali.”

Yahya noted, “Ennahda is putting itself at stake in light of the economic, social and perhaps unpopular security policies, knowing that most people were negatively affected by the neoliberal policies and the legacy of the dictatorship that still exists to this day. Ennahda’s keenness to remain part of this alliance, which guarantees it a position in power, seems to be justified by its fear of ending up like Islamists in Egypt.”

Independent journalist Mohammed Baltayeb told Al-Monitor, “The future differences between Ennahda and Nidaa Tunis will not be about passing laws in parliament or appointing ministers in the government; they will rather stem from the upcoming municipal elections. Ennahda is relying on an electoral audience that has an Islamic background and does not agree with Nidaa Tunis, its program and especially not with Essebsi’s views.”

He added, “Ennahda is so keen on showing itself as a political representative of the conservative class. The proof is it did not support the president’s initiative on Aug. 13 to pass laws regarding equal inheritance between men and women and allowing Muslim women to marry non-Muslim men.”

Baltayeb further explained, “On the contrary, a few days later on Aug. 29, Ennahda leader Rachid Ghannouchi launched an initiative aimed at re-establishing the religious endowment system, abolished in 1957. Despite separating religious work from political action during Ennahda’s 10th conference in May 2016, it is still a victim of the Islamic identity discourse, from which it draws its popular power and voter strength.”

Nidaa Tunis and Ennahda come from two different backgrounds. The Islamic Ennahda movement was founded in the early 1970s as a religious group and then developed into a political organization, inspired by the Muslim Brotherhood. After Ben Ali's departure in 2011, it started working legally and declared that it had abandoned its Islamic political references. Nidaa Tunis was founded in 2012 and brought together liberal supporters of former President Habib Bourguiba, including its founder, Essebsi, who headed several ministries between 1956 and 1987 during Bourguiba's reign, a bitter enemy of the Islamists.

Baltayeb pointed out that “the future of the alliance between Nidaa Tunis and Ennahda will be subject to several objective factors, including the municipal and local elections scheduled for December 2017. It is also prone to the internal situation of both parties, which are divided by political and organizational differences. This is particularly true for Nidaa Tunis, whose division resulted in this alliance between a secular and an Islamic party.”

It seems that a wedge has been driven between the Islamic Ennahda movement and Nidaa Tunis. Essebsi’s statements are nothing short of a representation of the differences between the two allies.

The upcoming local elections seem to have pushed both parties to get voters on each of their sides, after losing a big part of their popularity over the past three years, as their failure on the economic level caused a lot of damage for the middle class and the poor.

After founding his party in 2012 for the sole purpose of confronting Ennahda, Essebsi lost the bulk of his supporters after allying with the movement in 2014. Same goes for Ennahda, which made it as a ruling power in 2011 by claiming to be an extension of the January 2011 revolution, before many of its supporters gave up on it after it joined forces with those it believed to be “more dangerous that extremist Salafists.”

However, regardless of all disagreements between them, the consensus that holds Nidaa Tunis and Ennahda together will undoubtedly remain until the next legislative elections in the fall of 2019, the outcome of which will determine the ultimate fate of this alliance.