President Beiji Cai Essebsi’s call for a law establishing equal inheritance rights for men and women has sparked debate in Tunisia, a pioneer in women's rights in the Middle East but also a largely conservative society where most people reject contradicting Sharia. 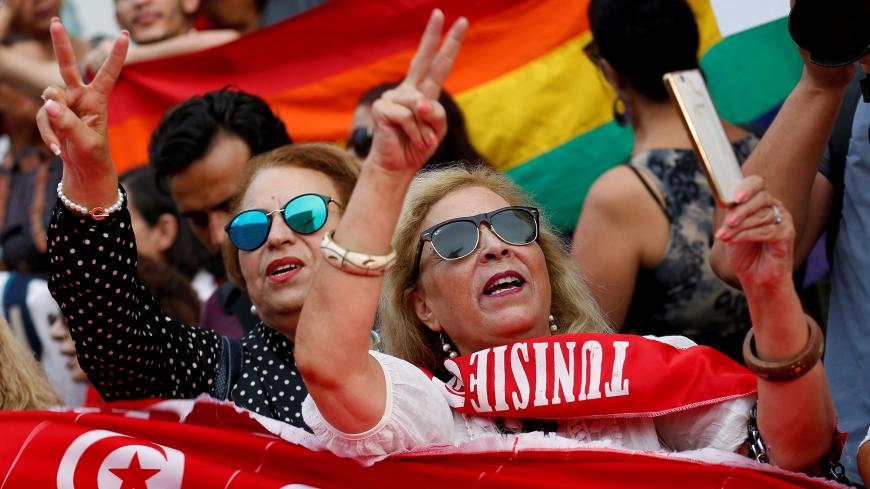 TUNIS — President Beji Caid Essebsi’s proposal to make inheritance rights equal for men and women has sparked heated debate over the role of religion in public policy as Tunisia begins gearing up for presidential and parliamentary elections scheduled for November 2019.

On Aug. 13, National Women’s Day, Essebsi called on parliament to pass legislation amending the country’s inheritance law, which, as per Sharia, generally allots women half of what men receive. He added that exceptions could be made for those who opt for the application of Islamic law.

The proposal, which will likely be debated in parliament when it reconvenes in October, follows on the back of a controversial report issued by the Essebsi-appointed Individual Freedoms and Equality Committee (COLIBE), which first recommended the measure.

In addition to codifying equal inheritance, the report advocates abolishing the death penalty, decriminalizing homosexuality and annulling dowries, all contentious issues not only in Tunisia, but throughout the Muslim world. These changes, the report’s authors contend, are needed for Tunisia to live up to the ideals enshrined in its 2014 constitution, which ensures equality between men and women and individual rights to all citizens.

While eliciting praise from some secularists and rights activists, the COLIBE report — and Essebsi’s push to move forward with equal inheritance — has provoked a backlash from Islamists, conservatives and even some moderates who view it as an unwelcome departure from Islamic values.

Thousands of men and women protested the report’s recommendations on Aug.11 outside the parliament in downtown Tunis, calling them a violation of Islamic precepts.

“I'm here to defend the word of God and oppose any projects that harm the Islamic identity of our people,” Kamel Raissi, a retiree, told the Associated Press.

Chiheb Eddine Tlich, spokesperson for the National Coordination Committee for the Defense of the Quran, the Constitution and Equitable Development, which organized the protest, later said at a news conference, “The [COLIBE report] was worked out by secular leftists who seek to cause divisions among Muslims. … The president of the republic neither read nor understood the constitution.”

Despite Tunisia’s 2014 constitution being hailed as among the most progressive in the region, some reforms aimed at ensuring gender equality remain widely unpopular in the country.

According to a December 2017 poll by the International Republican Institute (IRI), 63% of Tunisian respondents, including 52% of women, said they “strongly opposed” legislation guaranteeing equal inheritance between the sexes. The same poll also found that 65% of respondents “strongly opposed” the president’s move last year to repeal a decree barring Tunisian women from marrying non-Muslim men.

Tunis-based political analyst Youssef Cherif told Al-Monitor that such opposition reflects deep-rooted social and economic norms in a society that is “largely conservative when you move away from the official narrative clichés.”

“[Tunisia is] more open than many Muslim societies in the region, true, but there are red lines it doesn't cross, especially when it comes to clear Quranic texts,” Cherif said. “Moreover, the inheritance issue is an economic factor. Men in a largely paternalistic society won't easily accept being deprived of what they see and have grown used to as their rights.”

The sociologist Tarek Belhadj Mohamed told Al-Monitor that opposition to such reforms should be expected, but also challenged.

“The great reforms in history always encounter resistance from people who are afraid of what is new,” Mohamed said. “Even the code of personal status [put forward by former President Habib Bourguiba], which gave great privileges to Tunisian women, also found resistance in his time, but today he is a source of pride for all Tunisians.”

Essebsi, from the secularist Nidaa Tunis, hopes to build on that tradition, even if equal inheritance is “not a winning theme for Nidaa,” Cherif said. “Essebsi wants two things: a legacy for himself in history and to put pressure on Ennahda,” the moderate Islamist party, which aims to “position itself as a non-religious party before the local and international community” but whose base is “largely opposed to COLIBE for religious reasons.”

Cherif further stated, “[If Ennahda] openly opposes COLIBE, it may lose international support and have more opposition internally. If it endorses the report, however, it will lose its constituency.”

Thus far, Ennahda, which has a majority in parliament and is in a shaky governing coalition with Nidaa Tunis, has taken a careful line, with party chief Rached Ghannouchi stating, “[We] will engage on this presidential proposal when it is formally presented to the People's Representatives Assembly.”

Abdelkarim Harouni, head of Ennahda’s Shura Council, has asserted, “We have expressed our reservations about the issue of the equality in inheritance between men and women but we are open to debate other issues related to expanding rights and freedoms.”

Whatever the political implications, rights activists say the focus of the legislation should be its impact on women and how it will further Tunisia’s drive toward equality.

“The proposal is important because one can’t choose which rights to give and which to neglect,” Racha Haffar, founder of the anti-human trafficking association Not 4 Trade, told Al-Monitor. “If you want a country where human rights and equality prevail, you can’t stick to a religious text that doesn’t grant equal rights.”

Rania Said, a university lecturer in English at the Mediterranean School of Business, who attended a demonstration in Tunis in support of equal inheritance on Aug. 13, told Al-Monitor that while the proposal “is a political maneuver … that does not mean that equality in inheritance is an unjust cause.”

She explained, “If it passes, the proposal would be an important step toward achieving socio-economic justice for women in Tunisia, but it is not enough. We need more courageous proposals to protect individual freedoms in Tunisia.”