Tunisian President Beji Caid Essebsi’s proposal on National Women’s Day to amend the inheritance law so as to secure equal rights for women sparked much controversy in Tunisia. 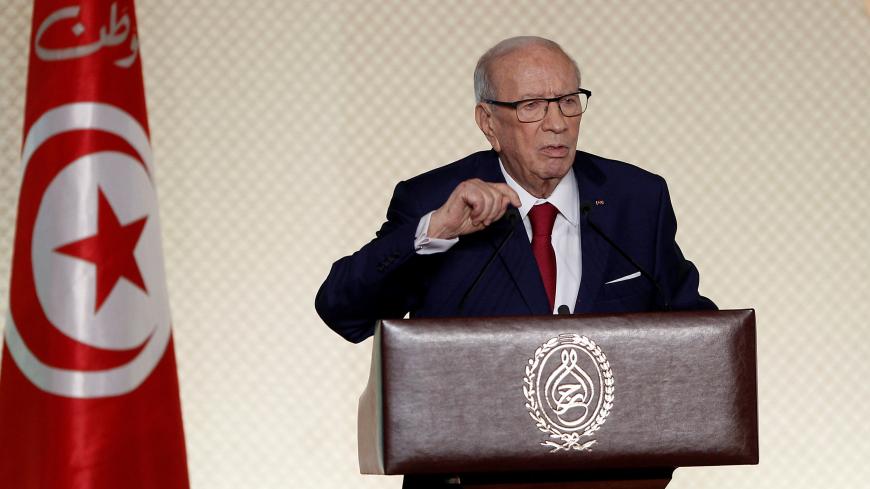 In his speech on National Women’s Day Aug. 13 in Tunisia, President Beji Caid Essebsi called for legal amendments to the inheritance law to ensure equal rights for men and women, and he called for Tunisian women to be able to marry non-Muslims, which he believes is not in direct conflict with Sharia or the Tunisian constitution.

The president’s statements sparked widespread controversy among conservative and liberal forces in the country.

“It is necessary to develop personal status laws in such a way to promote equality and to keep pace with modern legislation and changing modern times. This is especially true since law No. 73 — which bans Tunisian women from marrying non-Muslim men — has become an obstacle to the freedom of choice of the spouse. This is also necessary for the legal status of many [Tunisian] women married to foreigners. One ought to bring to mind as well Article 6 of the Tunisian constitution, which recognizes the freedom of belief and conscience and holds the state responsible for safeguarding it,” Essebsi said in his speech.

In Article 21, the Tunisian constitution stipulates that “all citizens, male and female, have equal rights and duties, and are equal before the law without any discrimination.” Article 46 states: “The state commits to protect women’s accrued rights and works to strengthen and develop those rights. The state guarantees the equality of opportunities between women and men to have access to all levels of responsibility in all domains.”

Tunisia is also bound by the UN Convention on the Elimination of All Forms of Discrimination Against Women (CEDAW), ratified in 2014 by the Tunisian parliament. In contrast, the Tunisian Personal Status Code, which regulates family issues, stipulates that the Sunni Islamic jurisprudence should be applied to inheritance issues, whereby women are entitled to only half of what men receive in inheritance.

Essebsi’s proposal to amend the personal status code was not unanimously welcomed in the political and civil circles of Tunisia. Al-Mahaba movement, led by al-Hashemi al-Hamidi, a dissident from the Ennahda movement, called for the withdrawal of confidence from the president on Aug. 13. Meanwhile, in a joint statement Aug. 16, several national movements and cultural institutions said that the president’s proposal was in direct conflict with the verses of the Quran and the basis of religion.

"Calling for equality in inheritance today in a society dominated by private ownership and capitalism is nothing more than transforming the social conflict between Muslims and capitalism and feudalism into family sedition,” Bashir El Seid, the secretary-general of Al-Mourabitoun movement, told Al-Monitor.

“This is a way to distort the conflict, turning the father of a family into the enemy instead of the subordinate and manipulative capitalists. Therefore, we adhere to the Quran and Sharia texts. But we call for equality and fairness in society according to every individual’s efforts, diligence and persistence,” he added.

Tunisia's Grand Mufti Sheikh Othman Battikh said in a surprising statement Aug. 14, “The president’s proposal comes in support of the women’s rights and legal status, guaranteeing the principle of equality between men and women, which our religion calls for.”

A little over a year ago, in June 2016, Battikh said that equal rights in inheritance are contrary to Sharia, which begs the question about Dar al-Ifta’s affiliation with the political regime. This is especially true since Battikh issued a fatwa Sept. 26, 2016, against protests against the government.

The Ennahda movement, led by Rachid Ghannouchi, has yet to make an official statement in this regard. Ennahda is the main political force that represents conservatives in the country.

However, some figures affiliated with the movement expressed their opposition to Essebsi’s controversial statements.

Ennahda spokesman Imad Al-Khamiri told the Tunisian Al-Ribat radio Aug. 17, “It is too early to talk about the president’s proposal as it should be presented to parliament first.”

The controversy surrounding Essebsi’s proposal has spilled over into neighboring countries. Al-Azhar’s Undersecretary Abbas Shoman in Egypt criticized the Tunisian president’s proposal in a statement Aug. 15, saying, “This is in conflict with the provisions of the Islamic law.”

“The inheritance is provided for in peremptory verses that cannot be challenged or changed, regardless of time and space,” Shoman added in the statement Aug. 14 that was published on the official Facebook page of Al-Azhar’s undersecretary bureau.

The Tunisian Workers’ Party, part of the Tunisian Popular Front, considered in a statement Aug. 16 that “full and effective equality in legislations and on the ground is a legitimate objective, which Tunisian men and women have fought to achieve for many generations. This equality includes inheritance, family management and the abolition of all discriminatory laws, which have become archaic, such as men’s guardianship over women and the dowry.”

The statement added, however, that “Essebsi’s proposal is not credible as he and his cronies do not favor women’s cause.”

Essebsi’s proposal has reignited the conflict between liberal and leftist movements on the one hand and the conservative movement on the other. It also rekindled the rivalry between secularists and Islamists, which was put out since the president’s alliance with Ennahda following his victory in the legislative and presidential elections in 2014. This new development will have a major impact on the upcoming municipalities elections scheduled to take place by the end of the year.