Increasing numbers of women are organizing to pressure the government into legislating equal inheritance rights to replace the current law, which is based on the Quran. 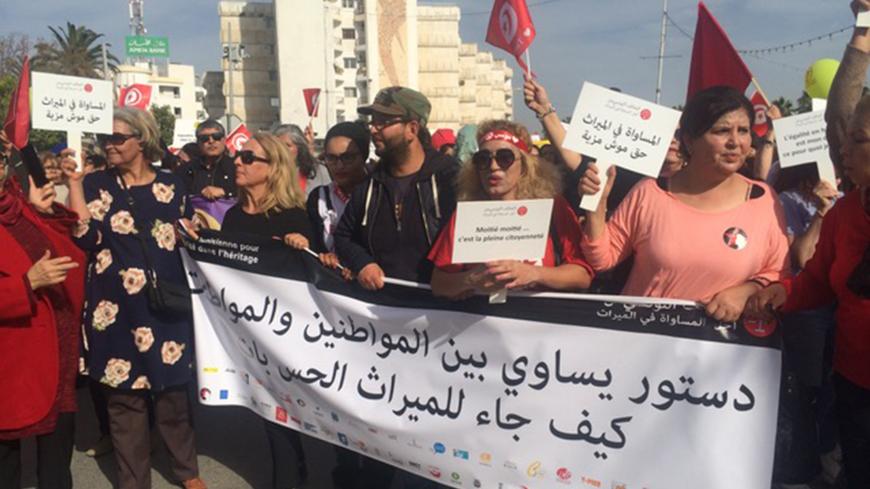 The Tunisian Coalition for Equality in Inheritance, which is comprised of some 70 women's rights groups, mobilized hundreds of protesters for a demonstration on March 10 in front of the parliament to call for a law guaranteeing equal inheritance rights.

Held under the banner “Equality: A Right Not a Privilege,” the march marked a new direction in Tunisian women’s quest for equal treatment by taking their struggle to the streets in the hope of pressuring the president and members of parliament into passing a new law granting them equality in cases of inheritance.

The current law is based on the Personal Status Code announced in 1956 by President Habib Bourguiba. The code was primarily based on the Quran, specifically the Surah an-Nisa (The Women), which states that in the case of surviving brothers and sisters, the male's share should be twice that of the female.

In an address delivered last August during celebrations for Tunisian National Women’s Day, President Beji Caid Essebsi promised to enact a code governing individual rights and gender equality and to review inheritance laws in the Personal Status Code to establish gender equality in that regard.

In the same address, Essebsi announced the formation of the Committee on Individual Freedoms and Rights. Bushra Belhaj Hamida, an attorney and human rights activist, heads the nine-member committee, which includes lawyers, women’s rights activists and university professors. Its main task is to prepare a report on reforms related to individual freedoms and gender equality in accordance with the 2014 constitution. The committee's recommendations will be delivered to Essebsi before they are submitted to the parliament for a vote.

Ahlam Belhaj, the former head of the Tunisian Association for Democratic Women, a group that defends women’s rights, attended the March 10 demonstration. She told Al-Monitor, “The 2014 constitution was a pivotal and significant victory for every Tunisian woman. Tunisian women today will not waive any of their rights guaranteed by the constitution, most notably, the right of full inheritance equality.”

The 2014 constitution addresses gender equality in Article 21, which states, “All citizens, male and female, have equal rights and duties, and are equal before the law without any discrimination.”

Belhaj emphasized, “Calls for equal inheritance are hardly a recent trend. It is an old goal for which the Tunisian Association for Democratic Women has strived since 1999. However, these calls did not elicit any response in the era of former President Zine El Abidine Ben Ali.”

Belhaj believes that the time has come for true gender equality and the repeal of all forms of discrimination against women, because today men and women are jointly and equally assuming economic responsibilities.

Salah al-Din al-Jourshie, a member of the Committee on Individual Freedoms and Rights, told Al-Monitor that the committee is examining two options in terms of inheritance equality. The first is to promulgate new laws ensuring complete inheritance equality between men and women, and the second is to also retain the laws in the current Personal Status Code. The latter would allow women to choose, during the administration of the estate, which law to apply. One platform of the March 10 rally was that complete gender equality in inheritance is incompatible with Quranic texts.

Jourshie said the committee is well-aware that increasing numbers of women are voicing support for laws codifying complete inheritance equality, but he also acknowledged that some women believe that Islam’s inheritance laws should be respected. While feminist civil groups are determined to spare no means of peaceful struggle in achieving inheritance equality, the issue remains controversial.

“The Committee is trying to find a middle ground,” Jourshie remarked. “Proposals and recommendations should reflect all views in Tunisia. We are aware of the sensitivity of the subject, which is why we postponed submitting the final report to the president until after the municipal elections, slated for May. 6. We didn’t want for this issue to become a political card between parties that might be exploited in the upcoming municipal elections.”