Tunisia's president asks US for help 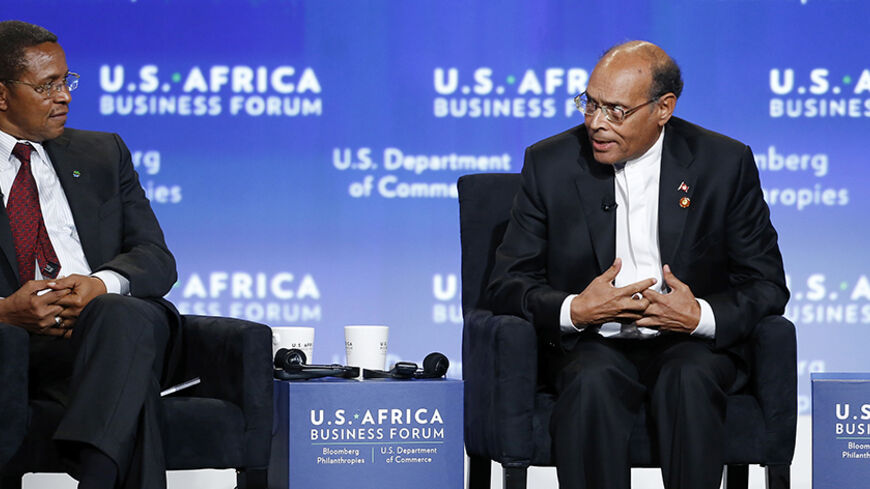 Tunisian President Moncef Marzouki made an impassioned plea Aug. 5 for a dozen US Blackhawk helicopters to fight terrorists who he said would try to sabotage upcoming parliamentary and presidential elections.

Marzouki, in Washington to attend US President Barack Obama’s Africa summit, warned an audience at the Atlantic Council that Tunisia was entering “the most dangerous three months in our history.”

Given the disappointing and even tragic results of uprisings elsewhere in the region, Marzouki said Tunisia — where the self-immolation of a fruit seller in December 2010 touched off what became known as the Arab Spring — “must be a success story. … If Tunisia fails, you can say goodbye to democracy in the Arab world for a century.”

In comparison to Egypt, Libya and Syria, Tunisia has done reasonably well.

A small, homogeneous country with a well-educated population, it has managed to incorporate both secularists and moderate Islamists in a steady if slow transition to democratic rule. A new constitution adopted by a large majority of parliament earlier this year has been widely praised for enshrining minority rights. Both secularists and Ennahda, the largest legal Islamic party in Tunisia, agreed to formation of a technocratic government to oversee parliamentary and presidential elections scheduled for October and November, respectively. However, the country’s economy has not fully rebounded since the overthrow of long-time strongman Zine El Abidine Ben Ali in 2011 and Tunisia is being buffeted by Islamic extremists trained in Mali and Syria.

Terrorists last year assassinated two prominent secular politicians. More than a dozen soldiers died last month on Mount Chaambi, where an affiliate of al-Qaeda in the Islamic Maghreb (AQIM) has created a sanctuary on the border with Algeria.

Karim Mezran, a senior fellow at the Atlantic Council who specializes in North Africa, told Al-Monitor that he was “amazed by how weak the Tunisian army is,” and its apparent inability to flush out the terrorists from Mount Chaambi despite the presence of the Algerian army along the border on the other side.

Marzouki admitted that Tunisia’s military was having difficulties but blamed them on a lack of training and equipment under Ben Ali who, Marzouki said, built up the police rather than the army. “The military didn’t have any training or any arms for 30 years,” Marzouki said. “We need about 12 helicopters, Blackhawks, and we need them now. We also need devices for night vision and communications” to allow Tunisia to get through the upcoming elections.

A US official, who asked not to be named, told Al-Monitor that bureaucracy was holding up the helicopters. He could not say when they might be delivered.

The Obama administration has provided Tunisia with a half billion dollars in loan guarantees, something Marzouki acknowledged as “very helpful.” He said in his meetings with US officials this week he would also urge them to intercede on Tunisia’s behalf with the International Monetary Fund and ask it “to be patient with us.”

The security situation and uncertainty about the political transition is undermining the Tunisian economy, Marzouki said. “During this period, foreigners are not very keen to invest. They are waiting for the transition to be over.” Meanwhile, the lack of economic growth contributes to instability in a chicken-and-egg dilemma. “Democracy without employment won’t work,” Marzouki said.

The poor economic situation and the long transition from Ben Ali’s dictatorship to a longer-term elected government are also feeding widespread political apathy among Tunisians. Authorities had hoped to attract another four million voters to the rolls this summer but only about 760,000 people have registered despite repeated extensions of the deadline.

Ennahda, which appears to be concentrating on the parliamentary vote, has yet to announce a presidential candidate. The party’s main rival is a secular coalition called Nidaa Tunis that is led by Beji Caid Essebsi, an octogenarian former cabinet minister and close associate of the late Habib Bourguiba, Ben Ali's predecessor. The rising strength of the group suggests that Tunisia — like Egypt and Libya — is experiencing a certain nostalgia for its pre-revolutionary past.

Asked by Al-Monitor if he intended to run for president, Marzouki, a secular, once-exiled human rights activist who was appointed by an interim body in 2011, said he would decide by the end of September.

Marzouki marveled at the political journey Tunisia has traveled since its revolution and said that defeated dissidents from Egypt and Yemen had told him recently that Tunisia is “the last hope” for democracy in the Arab world given the “horrible civil war in Syria, the chaos in Libya” and the reversion to military rule in Egypt.

Tiny Tunisia is also bearing the burden of refugees from failed revolutions. Marzouki said that about two million Libyans have now sought refuge in Tunisia — a number equivalent to one-fifth of Tunisia’s population.

While some of the Libyans are injecting money into the Tunisia economy, others are relying on the charity of their small neighbor, which lacks Libya’s oil resources. “We have received them very well,” Marzouki said. “I am very proud of our hospitality.”

Repeatedly, he urged other Arab countries to emulate the Tunisian model if they hope to achieve long-term stability and prosperity. He also praised Ennahda for accepting “the rules of the game” and not seeking to monopolize political power.

“You have to have an inclusive government,” he said in response to a question about Egypt. “You have to have all the political actors. It’s nonsense to believe that any social or political party in any Arab country can be the leader and do what exactly has been done during the five decades that led to the revolution.”

Mezran expressed qualified optimism that Tunisia would complete a successful transition. “If they can put their political act together, I think they’re going to make it,” he said.