Tunisian President Moncef Marzouki speaks to Al-Monitor's Sophie Claudet just days after the US embassy in Tunis was stormed by Salafists. Marzouki said more could have been done to prevent the attack. He also acknowledged the rise and danger of Salafists, but said that force will not solve the problem of radical Islam. 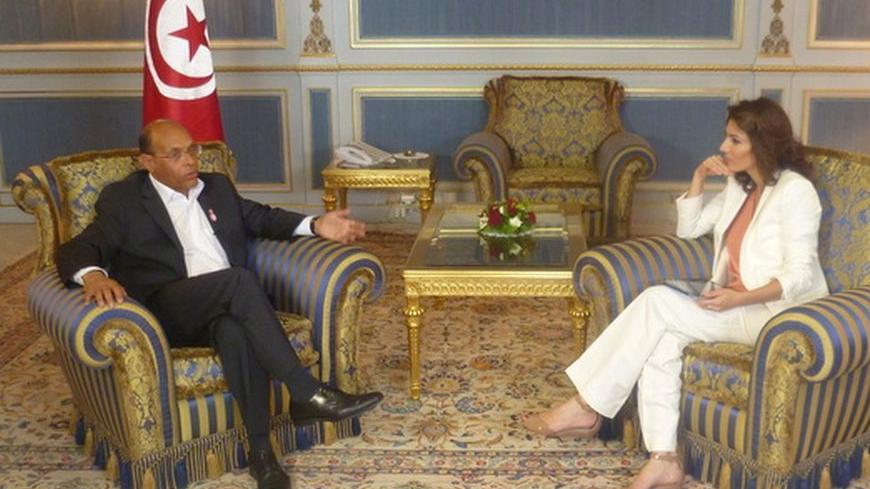 Tunisian President Moncef Marzouki talks with Sophie Claudet of Al-Monitor during an interview at the Presidential Palace in Tunis, Tunisia September 21, 2012. - Akim Rezgui

Tunisian President Moncef Marzouki speaks to Al-Monitor's Sophie Claudet in an exclusive interview just days after the US embassy in Tunis was stormed by Salafists.

The attack came in protest over a film produced in the United-States and mocking Islam's prophet Muhammad. At the time of Al-Monitor's interview, Tunisia's capital was also in high alert after a French weekly published caricatures also ridiculing Muhammad.

President Marzouki said the attack on the US embassy, which he labeled "black Friday," could have been altogether avoided and that security forces could have done more to prevent it. An inquiry has been launched, he added.

He acknowledged the rise and danger of Salafists in Tunisia, calling its most radical elements a "tiny minority" and yet a "threat to democracy and Tunisia's relations with other countries." But, he said, using force like former president Ben Ali did would not solve the problem of radical Islam, which should be tackled through politics, social justice and security. In fact, he said he is encouraging Salafists to enter politics and form a party so they can play the democratic political game in Tunisia.

He also insisted that the moderate Ennahda Islamist party, which is part of the governing coalition in Tunisia, had come to terms with fighting radical Islam and shared his views on democracy. He assured Al-Monitor that Tunisia was striving for free speech and full equal rights for women, and that both would be reflected in the country's future constitution being currently drafted.

Watch the full interview where president Marzouki speaks of the country's upcoming constitution, his relations with Ennahda, the economy, Qatar and Saudi Arabia here.

Sophie Claudet is a print and television journalist specializing in Middle East affairs. She is currently based is Paris where she serves as Al-Monitor's Europe and Middle East correspondent as well as video editor-in-chief.