Hundreds of Tunisians protested in support of a woman who was allegedly raped by two policemen last month. The crowd gathered in Tunis, where the alleged raped victim was summoned by a judge. They denounced Tunisia’s worsening rights record, slamming the Islamist-led government for not doing enough to protect women. 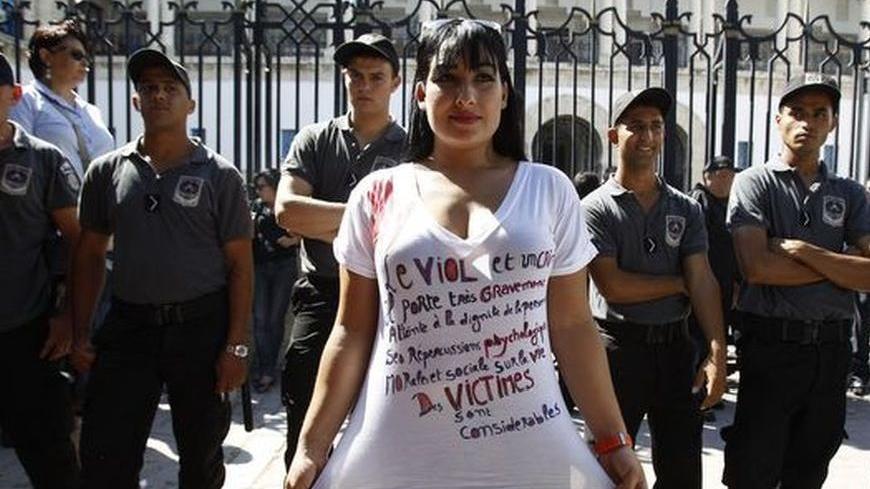 Hundreds of Tunisians protested in support of a woman who was allegedly raped by two policemen last month and now stands accused of "outraging public decency.” The crowd gathered outside Tunis' main tribunal on Oct. 2 where the alleged raped victim was summoned by a judge for the second time in less than a week.

They denounced Tunisia’s worsening rights record, slamming the Islamist-led government for not doing enough to protect women. The 27-year-old woman and her boyfriend were apprehended by three policemen on Sept. 3, apparently found in an indecent posture, according to judicial sources — a report contested by the woman’s lawyer. But instead of arresting or fining them, the policemen allegedly demanded money from the couple and went on to rape the woman in the back of her car while her boyfriend watched, helpless and handcuffed.

The incident inspired outrage among rights defenders in Tunisia. Violence against women has been on the rise in recent months, as well as attacks on places and symbols perceived to be secular or influenced by the West, including the US embassy, art galleries and movie theaters. Civil-society advocates say the government coalition, largely dominated by the Islamist moderate party Ennahda, is turning a blind eye to these violations perpetrated by radical Islamists or Salafists.

Salafists are also behind the apparition of the full-face veil, or niqab, for women on Tunisia’s streets and universities, a hitherto-unseen garment in the country. In August, Ennahda also angered rights activists when the party proposed that an article stating women’s complementarity, rather than equality, with men be included in the country’s future constitution. These developments are all the more surprising given that Tunisia was the first Arab country to grant equal rights to women in 1956; the code of personal status has never been challenged since.

In an exclusive interview with Al-Monitor last month, Tunisia’s president Moncef Marzouki vowed that the article would never make it to the final draft of the constitution. He also said that his government would do its utmost to rein in Salafists. But many in Tunisia believe that Marzouki, who comes from a secular, left-wing background, is powerless in the face of Ennahda’s growing influence.

The Islamist party won most of the seats in the assembly tasked with drafting the constitution in a free and fair 2011 election. Observers attribute Ennahda’s landslide victory to its great organizational capacity in a country left with almost no opposition forces to reckon with after decades of dictatorship. The Islamists’ populist agenda also appeals to Tunisia’s many poor and disenfranchised.

Akim Rezgui is a French-Tunisia cameraman and producer based in Tunis.