A Tunisian woman who alleges she was raped earlier this month by two policemen now stands accused of indecency, says her lawyer. Women's groups and human rights associations are planning to stage a large protest, reports Sophie Claudet for Al-Monitor. 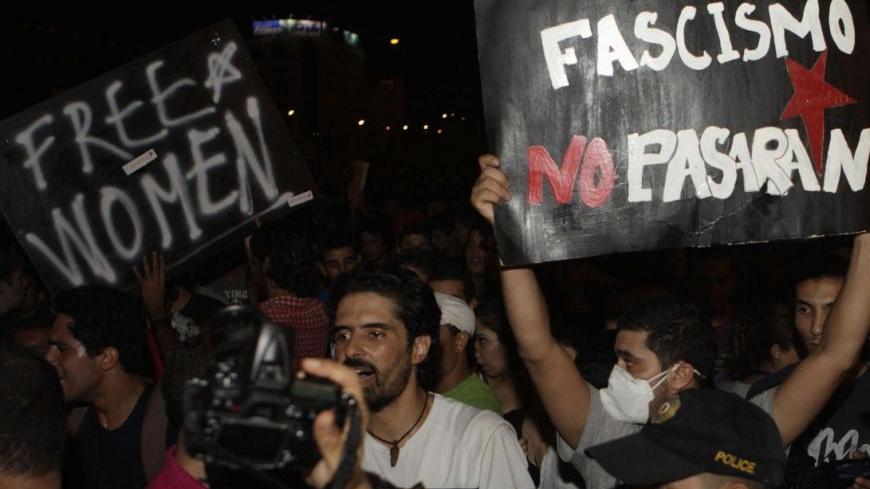 Protesters hold signs as they stand in front of riot police during a demonstration in Tunis Aug. 13, 2012. Thousands of Tunisians rallied to protest against what they see as a push by the Islamist-led government for constitutional changes that would degrade women's status in one of the Arab world's most liberal nations. - REUTERS/Zoubeir Souissi

A 27-year-old Tunisian woman who alleges she was raped earlier this month by two policemen now stands accused of indecency, her lawyer said. The woman was called by a judge to confront her two assailants on Wednesday, but in an unexpected development, the judge decided to pursue the victim for “outraging public decency” attorney Saida Garrach told Al-Monitor.

The woman and her boyfriend were apprehended Sept. 3 by three policemen in a suburb of Tunis as they were sitting in their car, and asked for money. The boyfriend was handcuffed while his partner was raped by two of the policemen in the back the car, she claims. The two are now sitting in jail awaiting trial. Traces of both men’s semen were found on the car’s seat and on the victim’s underwear, the lawyer said.

Garrach expressed both surprise and outrage at the judge’s decision regarding her client: “it means that a woman sitting with her boyfriend in a car is necessarily guilty!” She said her client had admitted to flirting with her boyfriend though she was not caught red-handed. “The policemen themselves acknowledged they had not caught the couple in the act of flirting, so there is no ground for this judge to pursue my client.”

The young woman has been summoned by the judge to appear in court for “outraging public decency” on Oct. 2, Garrach said. Women rights and human rights’ associations, including Garrach’s own — the Tunisian Association of Democratic Women — are planning to stage a large protest outside the tribunal.

Thousands of rights’ defenders took to the streets of Tunis last month after the Islamist party Ennahda — which dominates both the country’s government and assembly — proposed an article as part of Tunisia’s future constitution that states that women are complementary to men rather than equal.

Tunisia’s President Moncef Marzouki told Al-Monitor in an exclusive interview on Sept. 21 that the article would never make it to the final draft of the constitution. “My position is very clear: I've always said that equality must be equality and that there is no half equality … I talked to many friends in Ennahda and said it's a non-sense and they agreed. I think in the constitution these kinds of words will completely disappear. I can assure you,’” he said.

Garrach said the rights of Tunisian women were being “threatened more than ever,” as she blamed the Islamist-dominated government for its “openly hostile discourse concerning women’s rights and its very sloppy behavior when it comes to protecting them when they are the victims of attacks.”

She said Ennahda, which portrays itself as a moderate Islamist party, “promotes hatred against women, and is openly supporting the [radical Islamist] Salafists”. “In fact, I consider that Ennahda and Salafism are one of the same.”

Salafists are behind the apparition of the full face veil or niqab for women on Tunisia’s streets and universities, a hitherto unseen garment in the country. They have also violently attacked art galleries, movie theaters and more recently the US embassy in what they said was the defense of Islamic values.

Garrach said it was of utmost importance “to capitalize on this latest violation and show our solidarity with women who are victims of violence.” She commended her client for having “the courage and the strength to go a to hospital after she was raped, get all the tests done and file a complaint.” This, she added “goes to show that in post-revolutionary Tunisia, people are more attentive to their rights as citizens. We no longer shut up, we speak up and we speak our minds.”

Tunisia was the first Arab country to grant equal rights to women in 1956; the code of personal status has never been challenged since.