The new Tunisian government, which includes 10 women, was sworn in amid controversy over its legitimacy, since it was not approved by parliament as stipulated in the constitution. 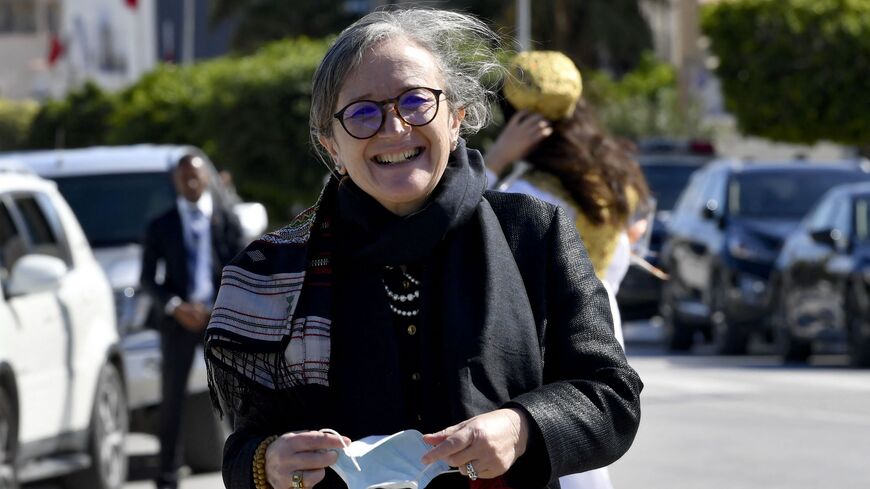 Tunisian Prime Minister Najla Bouden arrives at the martyrs memorial in the northern town of Bizerte on Oct. 15, to attend the official commemoration ceremony for the 58th anniversary of the Evacuation Day. - Photo by FETHI BELAID/AFP via Getty Images

TUNIS — The moderate Islamist Ennahda party, Tunisia’s largest party in parliament, issued a statement Oct. 14 rejecting the new government headed by Najla Bouden. “It’s a de facto government of the unconstitutional Decree 117,” in reference to the order issued by President Kais Saied on Sept. 22, which put the executive and legislative powers in his hands.

Twenty-four members of the new government, which includes 10 women and is headed by a female prime minister for the first time in the history of Tunisia, took the constitutional oath before President Saied on Oct. 11 at the Carthage Palace.

Former Tunisian President Moncef Marzouki said in a Facebook post on Oct. 14 that the new government was illegitimate because it did not gain the vote of confidence in parliament since it was suspended by Saied on July 25, in an explicit violation of the constitution.

Political activist Jaouhar Ben M’barek said on Facebook on Oct. 11 that Bouden’s government is an illegal “coup body,” adding, “We will confront it the same way we would a coup, and it will face the same fate.”

Issam Chebbi, the secretary-general of the Republican Party, told Al-Monitor that the new Tunisian government is a clear coup against the constitution, considering Decree 117 to be lacking legitimacy because it puts all powers in the hands of the president.

Chebbi, while praising the appointment of a woman to lead the government, said Saied chose its members and can dismiss whoever he wants. He added that the new government is only tasked with implementing the president’s policies, which will set back Tunisia decades.

On Oct. 11, the Workers’ Party said in a statement that the new government is a “government of coup” and that what Bouden said during her oath were empty promises that Tunisians have repeatedly heard from previous governments and from Saied himself.

However, Hafez al-Sawari, a member of the People's Movement politburo, told Al-Monitor that the new government reflects the will of the people who revolted on July 25 and demanded the overthrow of the current political system, which has been controlled by Ennahda and its allies since the fall of the Zine El Abidine Ben Ali regime in 2011.

Sawari said Saied is building a new system, and that the new government will derive its legitimacy from its ability to resolve outstanding issues, respond to the demands of the Tunisians, and give the country back to its people.

Saied issued exceptional measures on Sept. 22 by presidential decree, according to which the government would answer to him, while he would issue legislation by decree instead of parliament. He also decided to lift the immunity of parliament members and suspend their salaries.

On Sept. 29, Saied appointed Bouden to form the government, a move welcomed by women's rights activists in Tunisia. The head of the National Union of Tunisian Women, Radhia Jerbi, told radio Mosaique on Sept. 29 that Tunisian women deserve the position of prime minister. Jerbi added that Bouden's appointment is the culmination of Tunisian women's struggles over decades for full citizenship and equality.

In a Sept. 29 Facebook post, Frawes Yosra, the head of the Tunisian Association of the Democratic Women, expressed her happiness at the appointment, although she wished it had happened under different circumstances.

Lamia al-Majri, a member of the Association of Tunisian Judges, told the state-run Assabah News website on Sept. 29, “As a national human rights association within the progressive human rights fabric of the national forces in Tunisia, we believe having a woman head the government is a positive thing.”

Saied’s recent moves have received the backing of the People's Movement, the Tunisia Forward movement and the Tunisian Popular Current, in addition to the Alliance for Tunisia, the Tunisian Ba’ath Movement, and the Socialist Party, all of which are leftist parties.

Zuhair Hamdi, the head of the Tunisian Popular Current, told Al-Monitor that Saied has responded to the demands of the people who were tired of Ennahda’s policies over the past 10 years. “This allowed [Saied] to gain important popular legitimacy,” Hamdi said, stressing the need to hold early elections and move forward from there.

Before Saied's recent moves, all governments had to gain parliament’s vote of confidence before taking the constitutional oath. Dismissing heads of government also had to be approved by parliament, but Saied unilaterally dismissed Prime Minister Hisham al-Meshishi on July 25.

Bouden's government is the 13th since the Jasmine Revolution that culminated on Jan. 14, 2011.