Moncef Marzouki blames the Syrian civil war for a resurgence of Islamist terrorism and warns that Egypt’s banning of the Muslim Brotherhood is “the most dangerous thing for you and probably for us.” 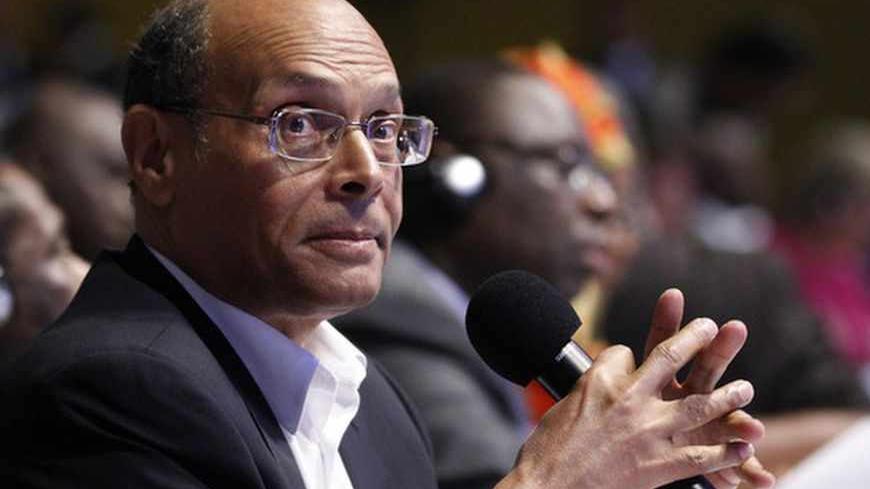 Tunisian President Moncef Marzouki said Wednesday [Sept. 25] that al-Qaeda is attempting a comeback in the Middle East, feeding off anger over the rising death toll in Syria and the Egyptian coup against the Muslim Brotherhood.

About 500 Tunisian young people have gone to Syria to fight against the regime of Bashar al-Assad, Marzouki said, and he fears they will return as experienced jihadists to target Tunisia’s own transitional government.

“We are doing our best to control the situation,” Marzouki, who is attending the UN General Assembly, told an audience at the Council on Foreign Relations. Comparing Tunisia to Algeria when jihadists schooled in the Afghan war against the Soviet Union in the 1980s returned, Marzouki said, “Nobody can be sure what would happen” when these fighters return home.

Tunisia is also at risk, he said, because of rising instability in Algeria, Libya, Mali and Egypt. “Tunisia is not an island,” he said.

The Tunisian president — whose government includes the moderate Islamist group Ennahda — voiced particular concern about the recent overthrow of Muslim Brotherhood President Mohammed Morsi in Egypt and the banning of the venerable Islamist group this week.

Marzouki — a secular human rights advocate who spent 15 years in exile when Tunisia was run by Zine El Abidine Ben Ali — said that while the Morsi government had made numerous mistakes, it was unwise to try to sideline the “central part of the Islamist spectrum.”

This will “give all the opportunity for extremists to play a very dangerous role,” he said. Banning the Brotherhood was “the most dangerous thing for you and probably for us.”

Incidents of terrorism have increased in both Egypt and Tunisia, where two prominent secular politicians have been assassinated. Marzouki blamed Ansar al-Sharia, a Tunisian extremist group that he said was close to al-Qaeda, for the killings.

He said that al-Qaeda is trying to recoup its losses from the initial Arab uprisings, which were led by secular and mainstream groups, not the Islamists.

“This network has decided to abort the whole [political] process in the Arab world,” Marzouki said.

Tunisia’s transitional government has been under fire for providing lax security for opposition leaders and for stalling on completing a constitution that was supposed to have been concluded a year ago.

Ennahda has agreed under pressure to allow an independent prime minister and cabinet to be appointed in the next few months to supervise elections for a new parliament and president next year.

Abraham Udovitch, professor emeritus of Near Eastern Studies at Princeton University, told Al-Monitor that infighting over the constitution was tied to differences over the role of religion in society, women’s rights and the place of Sharia. Secular Tunisians also worry that Ennahda is delaying the process “to consolidate themselves in different positions,” he said, recognizing that the party would do less well in elections now than two years ago.

Marzouki said that supporters of the previous regime in Tunisia had been “very very much encouraged by what happened in Egypt” even though there are major differences between tiny, middle-class Tunisia and impoverished Egypt, the Arab world’s most populous state.

Egyptian officials attending the annual UN meeting have been on the defensive about the removal of Morsi by the military and have struggled to explain how Egypt can hold new democratic elections with the Brotherhood banned, hundreds killed by the military and many more in jail.

Egyptian Foreign Minister Nabil Fahmy told Al-Monitor, “Morsi was removed not because he was a bad president, but because he wanted to be an exclusive president and fashion Egypt in his own image.”

Fahmy also asserted that Egypt would follow a road map calling for completion of a new constitution and elections for parliament and president next year. Egypt will eventually become a stable democracy, he said.

“I’m confident we will succeed. What I can’t tell you is how long it will take and at what price,” Fahmy said.

Marzouki also urged the rest of the world to be patient, noting that it took France 70 years to consolidate its revolution.

“I am pessi-optimistic,” Marzouki said. “You cannot say the revolution is a success or failure for another decade.”

Barbara Slavin is Washington correspondent for Al-Monitor and a senior fellow at the Atlantic Council. She is in New York this week covering the UN General Assembly. On Twitter: @BarbaraSlavin1