The Iranian Revolutionary Guard Corps and its militias in Deir ez-Zor, eastern Syria, are trying to avoid further losses from suspected Israeli airstrikes by redeploying, hiding inside residential neighborhoods in large cities and putting their strategic weapons in underground tunnels. 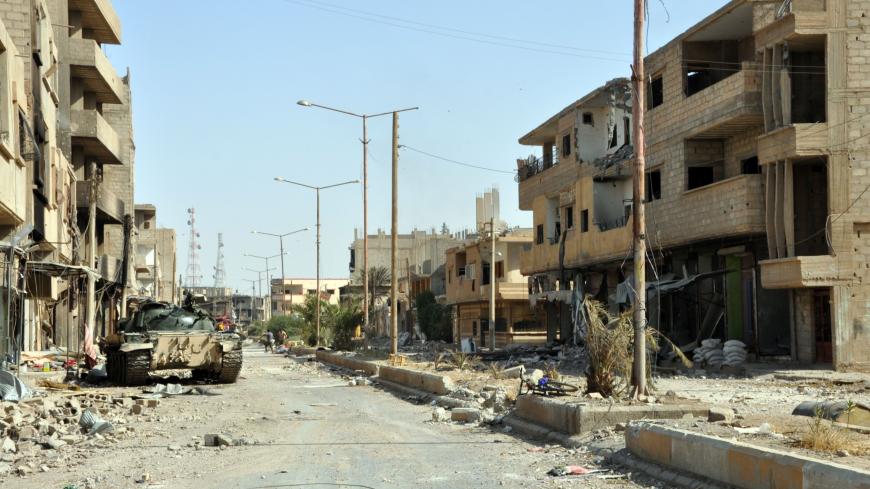 Damaged buildings are seen on Oct. 20, 2017, after Syrian forces recaptured the city of Mayadeen from the Islamic State. On Jan. 13, 2012, suspected Israeli airstrikes damaged positions in the city linked to Iranian-backed forces. - STRINGER/AFP via Getty Images

ALEPPO, Syria — Iranian forces and affiliated militias in Deir ez-Zor province in eastern Syria carried out new redeployment and repositioning operations after their military sites and barracks were subjected to airstrikes, believed to be carried out by Israeli aircraft Jan. 13.

The redeployment included evacuating the sites affected by the bombing, emptying several weapons depots, and moving weapons to other locations in various neighborhoods in the cities of Deir ez-Zor, Abu Kamal and Mayadeen.

Ahed Slebi, a journalist in the Naher Media Network, which covers news about Deir ez-Zor, told Al-Monitor, “The Iranian Revolutionary Guard Corps [IRGC] and its militias in Deir ez-Zor governorate have carried out unprecedented military action, due to the violent bombing that targeted their sites. The Iranian militias transferred the bulk of their members and military equipment to residential neighborhoods in Deir ez-Zor, al-Bukamal, and al-Mayadin. The new deployments included transferring rockets and heavy weapons and hiding them inside the tunnels that Iranian forces had previously dug in the vicinity of al-Bukamal and al-Mayadin and on the outskirts of Deir ez-Zor.”

Slebi added, “The IRGC and its affiliated militias fear more violent bombings during the coming period, which is why they are fortifying their sites and hiding their weapons and military headquarters inside residential neighborhoods. They have also lowered flags from the roofs of the buildings where they are stationed. They removed all signs indicating their presence to avoid being targeted, and imposed a security cordon around their military sites.”

It seems that the Iranian forces and their militias were expecting more airstrikes, as they previously began fortifying their positions in their areas of deployment in Deir ez-Zor, have redeployed forces and concealed strategic sites, dug underground tunnels to hide their weapons and strengthened the presence of their forces in the border area with Iraq to maintain the land bridge that connects them to Iran via Iraq. It seems that the time has now come for the Iranian forces in eastern Syria to use the underground tunnels to reduce losses if the airstrikes escalate.

The suspected Israeli airstrikes that targeted the sites of the Iranian forces and their militias in the countryside of Deir ez-Zor on Jan. 13 were not the first, as several such strikes were reported over the past few weeks. On Jan. 12, several explosions rocked the Abu Kamal desert area in the countryside of Deir ez-Zor, as the area witnessed overflights by warplanes and drones, which carried out raids on the Iranian militia sites. That same area was also targeted by three airstrikes Jan. 7.

Capt. Abdulsalam Abdulrazzaq, a researcher in military issues, told Al-Monitor, “The intensity of drones and raids seemed justified over the past few weeks, as the Iranian militias escalated their action in that area. Israel and the US were closely watching those movements and took action for fear of the Iranian militias’ influence expanding in the area and the risks that could entail.”

Abdulrazzaq added, “The Lebanese Hezbollah militias, the Afghan Fatemiyoun Brigade, the Pakistani Zainebiyoun Brigade, Battalion 313, the Baqir Brigade and other militias supported by the IRGC in Syria have all taken up Deir ez-Zor and the border strip with Iraq in Abu Kamal and Mayadeen as a new area of ​​influence. They believed they could escape the Israeli fire they were constantly under near Damascus and in southern Syria; they thought that by moving away from the borders with Israel they would be able to build a new area of ​​influence, so they started building headquarters and underground tunnels, brought military reinforcements and strategic weapons to the area, and have been expanding their presence there for about three months, but Israeli aircraft were just around the corner once again.”

Slebi said, “The first raids targeted the Imam Ali military base in the countryside of Abu Kamal, which is the largest Iranian base in eastern Syria. The sites near the village of al-Heri in camps erected by the Pakistani Zainebiyoun Brigade were also bombed, followed by sites in southern Mayadeen city near al-Rahba, which is a zone of influence for the Afghan Fatemiyoun Brigade. Targets also included other sites in southern Abu Kamal, specifically the roads leading to the Qaim crossing and the military crossing with Iraq, where the Lebanese Hezbollah is stationed. The bombing reached the Iranian forces' sites within residential neighborhoods in Deir ez-Zor, on the outskirts of the Harabish neighborhood, Port Said Street, the Military Security building, and the Ayyash warehouses, in which explosions kept going for a long time, which was evidence that ammunition stores had exploded inside them.”

Slebi said, “The airstrikes targeted over 35 sites of the Iranian forces and militias, killing over 80 people. However, no accurate figures of the death toll and material damage are available because the Iranian militias conceal information and impose a security cordon around their targeted locations.”

Bilal Sattouf, a political activist residing in the countryside of Aleppo, told Al-Monitor, “The Israeli bombing is expected to continue with the aim of weakening the Iranian forces in Syria and preventing them from expanding. I also expect the targeting to expand toward Iranian sites in Aleppo and southern Raqqa. It will be easy for Israel to carry this out in the absence of an Iranian deterrent system capable of stopping it, as well as the lack of Iranian approaches to open warfare.”