Why refugees won’t return to Syria

Syrian President Bashar al-Assad’s call on Syrian refugees to return to the homeland has sparked many reactions, as some still fear returning to cities and towns occupied by Iranian forces accused of violations and abuses against the locals. 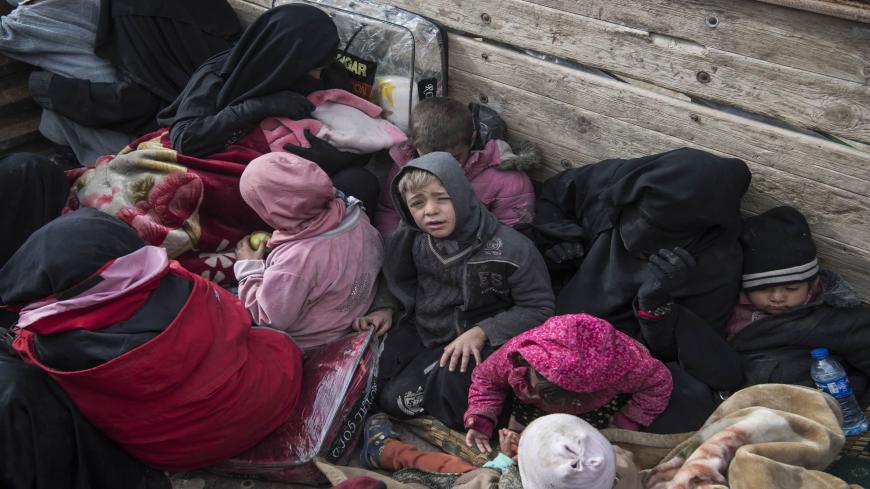 Women and children who fled the Islamic State's embattled holdout of Baghouz wait in the back of a truck in the eastern province of Deir ez-Zor, Syria, Feb. 14, 2019. - Fadel Senna/AFP via Getty Images

Syrian President Bashar al-Assad has called on Syrian refugees to return to their cities and villages, sparking negative reactions from those displaced.

During the opening of a Russian-sponsored international conference on the return of Syrian refugees held Nov. 11-12 at the Umayyad Conference Palace in the Syrian capital Damascus, Assad spoke about the difficulties that the government is facing regarding the return of Syrians.

“Today we are facing an issue that consists of three interconnected elements: millions of refugees wishing to return, hundreds of billions of destroyed infrastructure built over the course of decades and terrorism that continues to lurk in some areas,” he said.

A’ed Ghanem is a retired Arabic-language teacher from the city of al-Bukamal in Deir ez-Zor governorate. He fled to Germany in 2015 and does not want to return to al-Bukamal, which the Islamic State (IS) occupied in 2014. The Syrian regime and allied Iranian forces took control of it in 2017.

“Iran occupied my city; its militias seized my house. Also, how could I return to areas that are constantly bombed by the Israeli air force. Life is not safe there. The Syrian government should drive Iran and its militias out of it so that we can return to our homes,” Ghanem told Al-Monitor.

He said that he is still in touch with some of his relatives in al-Bukamal, who told him that Iranian militias are committing serious violations against the civilians there.

“Some of my relatives who were unable to leave the city told me that the Iranian militias are carrying out arbitrary arrests in the villages around al-Bukamal. They are torturing prisoners and seizing empty homes to house the families of their fighters. In the meantime, they are subjecting people accused of belonging to IS to public executions,” he added.

Jamil al-Awad, a former engineer at an irrigation and agriculture company from the city of al-Mayadin, south of the provincial capital Deir ez-Zor, fled to Egypt four years ago and also refuses to return to his city because it is occupied by Iranian fighters.

“My cousin was shot dead by the Iranian Revolutionary Guard Corps [IRGC], which are tightening the noose around civilians, spreading Shiism among the people and encouraging ‘mutah,’ or temporary marriage, knowing that this marriage is rejected by our Sunni doctrine, which views it as a form of prostitution. Add to this the deteriorating economic situation and the state of insecurity in the cities dominated by Iran, such as al-Mayadin, al-Bukamal and parts of Deir ez-Zor and its countryside,” Awad told Al-Monitor.

Deirezzor24, an online magazine covering the developments in Deir ez-Zor, reported Nov. 13 that the Iranian militias forced the people of the city of al-Bukamal a few days ago to go on a march marking the third anniversary of Iran’s control of the city in November 2017. The celebrations were attended by leaders from the IRGC, the Lebanese Hezbollah, the Iraqi Kataib Hezbollah and the Popular Mobilization Units, among others.

Iran continues to bring more Shiite Afghan mercenaries to Syria. Over the past few days, it brought 150 Afghans and opened a new camp for them in the east of Deir ez-Zor, according to Nov. 16 reports.

Jamil al-Shafi, a journalist from Deir ez-Zor, believes that Syria has turned into a second Iraq because of Iran’s control over it, which resulted in an economic collapse.

“The deteriorating economic conditions have forced a number of city residents to sell their properties to the Iranians, who pay generously even though they are the only ones buying properties in al-Bukamal. In that city, like in other Syrian cities, Iran opened the door to recruitment for Syrian youths and is paying a salary of $700 [per month], which is an attractive salary compared to the Syrian army salary, which does not exceed $40 these days,” Shafi told Al-Monitor.

In early November, sources revealed to the media that Iran had dug new secret tunnels near the Syrian-Iraqi border in al-Bukamal desert and brought in military reinforcements.

The same sources, who were not identified, said Iran is digging trenches and tunnels during the night hours using heavy machinery in an area located 5 kilometers (3 miles) south of al-Hari village near Jassem al-Khanafar Mount in the desert of al-Bukamal. It also dug a water well and brought in prefabricated rooms to serve the project.

Kamel Atta, who specializes in Iranian affairs, said Iran’s colonial plans pose a threat to the lives of civilians and the region.

“Chaos is the name of the game in the Iran-occupied cities and towns of southeastern Syria, such as al-Mayadin, Deir ez-Zor and al-Bukamal, especially considering Iran’s suspicious movements in the cities and the Syrian desert, its continuous establishment of new training camps and ongoing deployment of Afghan mercenaries. Iran is settling them and their families in the houses of the Syrian displaced and refugees in an attempt to bring about a demographic change that bodes no good for the future of Syria,” Atta told Al-Monitor.

He concluded, “Those Iranian [camps] are periodically exposed to airstrikes, most likely from the Israeli air force, which is scaring the refugees away. Add to this that the Syrian war destroyed many Syrian cities, towns and houses. Assad must end the war, expel foreign powers and rebuild Syria before he calls on refugees to return.”