Pro-Iran militias in Syria soak merchants for cash at checkpoints

The checkpoints of the Syrian regime and the pro-Iranian militias along the main road between Deir-ez-Zor and al-Bukamal are imposing royalties on merchants and local residents in their areas of control. 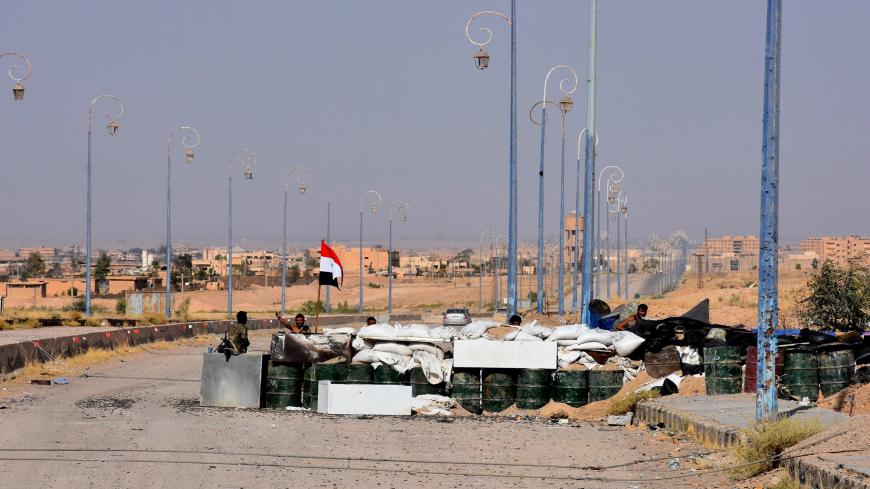 Members of Syrian government forces stand guard at a checkpoint on the outskirts of Deir ez-Zor, as they continue to press forward with Russian air cover in the offensive against the Islamic State across Deir ez-Zor province, Syria, Sept. 10, 2017. - George Ourfalian/AFP via Getty Images

The checkpoints  deployed by the Syrian regime forces and pro-Iranian militias along the main road between the cities of Deir ez-Zor and al-Bukamal — which were liberated from the Islamic State (IS) in November 2017 — are among the main sources of huge sums of money for Syrian officers and Iranian officials in charge of these checkpoints. They do not allow civilians and traders to cross with their merchandise except after having paid significant royalties. This has pushed many traders to escape to areas under the Syrian Democratic Forces (SDF) in the cities of Raqqa, Hasakah, Tabqa and others.

Ammar Mohsen, a sheep trader from the city of Deir ez-Zor, told Al-Monitor, “The [Syrian army’s] Fourth Armored Division that is loyal to Maher al-Assad, the brother of Syrian President Bashar al-Assad, controls most crossings and checkpoints in Deir ez-Zor and reaps the biggest share of financial returns, royalties and taxes imposed on the citizens of the area and its local traders.”

Mohsen said that before he fled to the SDF-controlled city of Hasakah in northeast Syria, he traded in sheep in the areas under the control of the regime and pro-Iranian militias in al-Bukamal and al-Mayadin. He said, “I had to pay each party, including the checkpoints of the Fourth Armored Division, which received the lion’s share. The regime-affiliated militia members heavily deployed on main roads and city entrances imposed royalties depending on the amount and type of merchandise. I had to pay $1,000 each time my sheep truck crossed a checkpoint.”

Katiba al-Hajal, a trader of foodstuff from Deir ez-Zor, told Al-Monitor, “The traders named each checkpoint after the crossing charge. For instance, the Fourth Armored Division checkpoint was called the ‘$500 checkpoint,’ while the Iranian militias’ checkpoint was dubbed the ‘$200 checkpoint.’ Others were known as the ‘$100 checkpoints,’ and so on. The officers took all these royalties.”

He said, “I had to pay several passage fees for my food truck because I crossed several checkpoints. Each time I would pay $500 for the officers at the checkpoints to allow me and my merchandise to cross. They sometimes increased the fee to $1,000, and I had to raise the selling price of my merchandise to civilians to compensate for my loss of profit. That is why I fled with my family, relocated to Tabqa city and moved my business there. The SDF checkpoints do not impose royalties on traders and civilians, unlike the regime forces and pro-Iranian militias.”

A National Defense Forces officer affiliated with the Syrian regime told Al-Monitor on condition of anonymity that the salaries paid by the Damascus government are low. This pushed them to impose royalties on civilians and traders, he said.

He added, “I receive a monthly salary of 50,000 Syrian pounds, equivalent to $25, which is too low. It is not enough to meet the needs of my family and myself, as we need around $500 a month. We impose taxes and fees on passersby at checkpoints we control to make ends meet.”

Samir al-Ramoush, a defected member of the regime forces who hails from al-Bukamal, told Al-Monitor, “There are ongoing daily disputes in Deir ez-Zor and its countryside between Assad-affiliated forces and Iranian militias, who both control the cities, about the right to collect money and impose taxes on passersby at checkpoints. Each party is trying to get the most money, which has sparked disputes. Violent battles are raging between them and might result in dozens of casualties.”

Media sources say that the Syrian regime’s intelligence forces are threatening the owners of stores and stalls in Deir ez-Zor to arrest them or pay a royalty of 5,000 Syrian pounds (about $9.74). They means that the regime’s intelligence and pro-Iranian militias have seized people’s property and stores in Deir ez-Zor and rented houses and stores in exchange for large sums of money.

They noted that the Iranian militias — led by the Islamic Revolutionary Guard Corps (IRGC) and that include the Lebanese Hezbollah, the Iraqi Kataeb Hezbollah, the Pakistani Zainabiyoun Brigades and the Afghan Fatimids — control the cities of Deir ez-Zor, al-Mayadin and al-Bukamal. There are internal disputes among the militias over the right of each to collect taxes from civilians, the sources added.

Said al-Kafi, an expert on Iranian affairs, warned against the escape of hundreds of families from the area and their prohibition from returning, especially in areas under the control of pro-Iranian militias in al-Bukamal and the surrounding villages, saying it would lead to these militias’ seizure of civilians’ belongings.

He also warned against the deteriorating economic situation faced by citizens in areas under the control of Iranian militias and regime forces. Kafi told Al-Monitor, “The citizens of Deir ez-Zor, al-Mayadin and al-Bukamal are facing tough conditions because the forces of the Syrian regime and the pro-IRGC militias are controlling their lives. The prices of vegetables, fruits and other foods are soaring due to the royalties imposed by these forces [on checkpoints], and the prices of services and products are way beyond the people’s purchasing power. This has negatively affected their lives and pushed many of them to escape to SDF-controlled areas.”