The Fatemiyoun Brigade and the Iranian militias have beefed up their presence in Deir ez-Zor province in eastern Syria by bringing in more Syrian elements into their ranks and intensifying their religious, military and cultural activities in order to expand and preserve their interests. 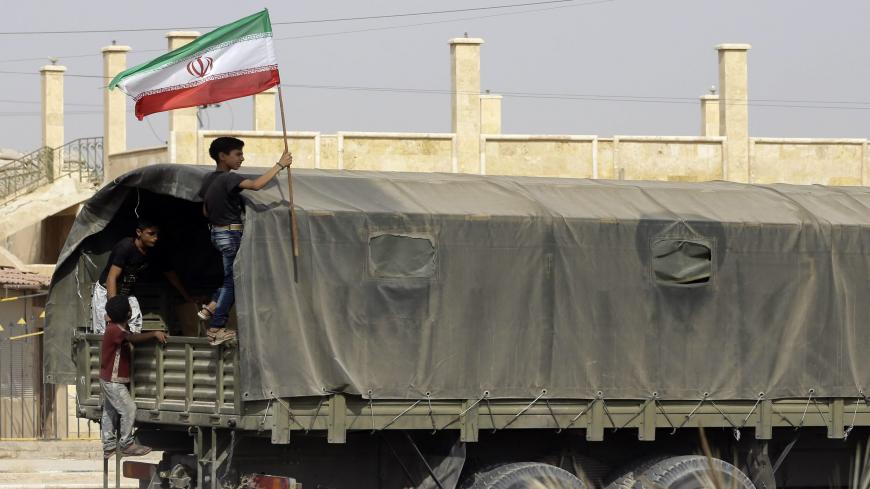 A Syrian boy holds the Iranian flag as a truck carrying aid provided by Iran arrives in the eastern city of Deir ez-Zor, while Syrian government forces continue to press forward with Russian air cover in the offensive against the Islamic State across the province, Syria, Sept. 20, 2017. - Louai Beshara/AFP via Getty Images

ALEPPO, Syria — Iranian forces and affiliated militias in Deir ez-Zor province in eastern Syria are trying to boost their influence and restore their prestige after suffering a resounding blow at the military, religious and cultural levels following the Israeli airstrikes that targeted Jan. 13 dozens of their sites in the province near the Syrian border with Iraq.

Iranian forces are working to recruit Syrians from Deir ez-Zor and other provinces to join their ranks and form new militias, as part of their plan to cling to their influence and strategic interests in the region. It also conveys a message of confrontation to both Israel and the United States.

The Afghan Fatemiyoun Brigade is one of the most prominent militias affiliated with the Iranian forces in Deir ez-Zor province, and it is widely spread in the province’s countryside as well as in other Syrian provinces. The brigade, and most of its Afghan Shiite fighters loyal to the Iranian regime, joined the war alongside Bashar al-Assad’s regime against the Free Syrian Army almost a year after the start of the Syrian revolution in 2011.

The Fatemiyoun Brigade subsequently became one of the largest Iranian-backed militias in Syria as it increased its presence and organized several training camps.

Ahmed al-Ramadan, director of the Euphrates Post, a Syrian opposition website that covers news of Deir ez-Zor province and eastern Syria, told Al-Monitor, “The Fatemiyoun Brigade is one of the largest Iranian militias deployed in Deir ez-Zor province and is widely relied upon to extend Iran’s influence in the region, which is rich in underground wealth.”

He said, “Two years ago, the Iranian forces began to show great interest in Deir ez-Zor province, so they supported the spread of their militias on a larger scale in the region. Among the militias that increased their presence was the Fatemiyoun Brigade, which began recruiting members through contracts in order to strengthen its popular base in Deir ez-Zor province and penetrate into the local community. In the wake of the [Jan. 13] Israeli airstrikes, the Fatemiyoun Brigade leadership drew closer to the people and influential figures to work on recruiting the youth in its ranks, taking advantage of the youth’s refusal to join the regime’s army as well as of their need for money and work. The brigade accepts volunteers aged between 16 and 48 years old.”

Ramadan noted, “Individuals wishing to join the Fatemiyoun Brigade ranks can go to the headquarters of the Nasr Center of the Iranian forces on Port Said Street in the center of Deir ez-Zor.”

According to the Persian newspaper Kayhan, which is close to Iran’s Supreme Leader Ayatollah Ali Khamenei, Ali Reza Tosli founded the Fatemiyoun Brigade along with 25 of his comrades after he sought refuge in Iran in the wake of the Afghan war in 1984. The name of the Fatemiyoun Brigade, according to the newspaper, first appeared in Syria in November 2012 in the battles fought against the Syrian armed opposition forces.

Some prisoners who were detained during the battles confessed that they were staying as refugees on Iranian lands and later joined the fight in Syria after they were promised to be recruited and offered with various incentives. They were also motivated by ideological and sectarian reasons.

The Iranian forces and their affiliated militias are pursuing their military activities, among other things, in Deir ez-Zor despite the continuous bombardment targeting their sites, military convoys and arms shipments by drones of unidentified sources.

Ahed Slebi, a journalist from Deir ez-Zor and a member of Naher Media, a news website covering news from Deir ez-Zor and eastern Syria, told Al-Monitor, “[Iran’s] Islamic Revolutionary Guard Corps [IRGC] has recently established a group called the Hashemites. This group has been active during the short period that followed the Israeli airstrikes in the city of Abu Kamal in the eastern countryside of Deir ez-Zor.”

He noted, “The tasks of the new militia members focus on protecting Shiite holy sites in Deir ez-Zor province — such as Ain Ali Spring in the countryside of Mayadeen and the Dome of Ali in the countryside of Abu Kamal — while carrying out inspection patrols. Forty individuals from Mayadeen have thus far joined the ranks of the Hashemites, in addition to 50 others from the city of Abu Kamal, most of whom hail from al-Mashahda Arab tribe. The Hashemites have taken two houses as their current headquarters, one in al-Alwa neighborhood in central Mayadeen and another in the main street of Abu Kamal; both houses belong to families displaced from the region.”

Slebi added, “Members of the Hashemites presumably earn 150,000 Syrian pounds [$44 at the black market rate] per month and are promised a subsequent increase. The group is headed by someone called Abu al-Eis who is assisted by someone called Hammoud.”

The IRGC had previously suggested to the elders and sheikhs of the Deir ez-Zor tribes to form a military force from the region’s tribesmen to support the IRGC and the Iranian forces in the province in return for direct military and material support. The aim appears to be attracting young men in the countryside of Deir ez-Zor in order to set up armed militias in return for attractive salaries, the strategic goal being to further cling to the region through various activities. The city of Abu Kamal in Deir ez-Zor is considered a strategic point for Iran, as it connects Iraq to Syria, and Iran to western Lebanon.