Tribal sheikhs in Syria’s Deir ez-Zor, some of whom are said to have been previously associated with the Islamic State in the province, attended a caucus in support of President Bashar al-Assad for the upcoming presidential elections. 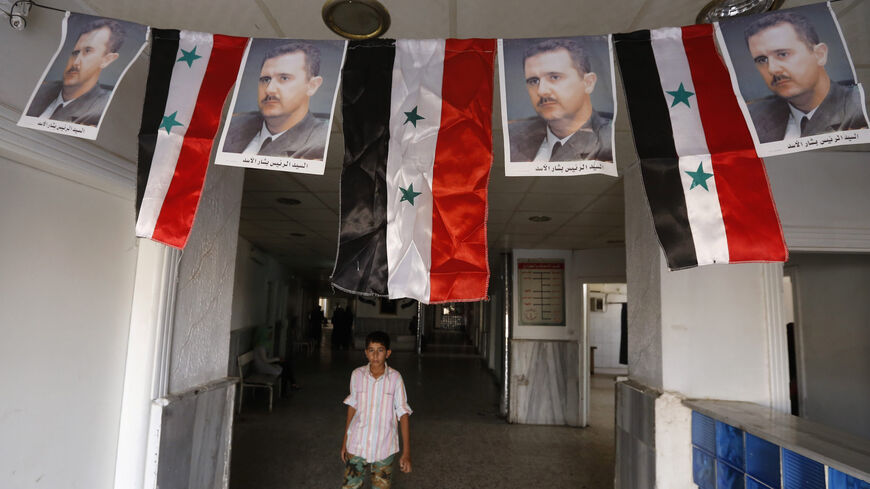 A Syrian boy walks under portraits of Syrian President Bashar al-Assad adorning a hospital in the eastern city of Deir Ez-Zor on Sept. 20, 2017. - LOUAI BESHARA/AFP via Getty Images

ALEPPO, Syria — The Syrian government sponsored a caucus March 22 for Arab clans and tribes in Deir ez-Zor province in eastern Syria in a move that appeared to rally support for President Bashar al-Assad in the upcoming presidential elections.

The final statement of the one-day forum said that the clans adhere to the unity, land and people of Syria and that they “stand by the Syrian army under Assad’s command.” The forum sent a message to Assad pledging that “the sons of Deir ez-Zor will always remain faithful soldiers behind his wise and courageous leadership, as they believe it is the only thing capable of bringing Syria to safety.”

The official Syrian News Agency quoted several tribal leaders at the forum who stated their support for the Syrian leadership in its fight against terrorism in Syria. Among them was Sheikh Nawaf al-Bashire of the Bakara tribe, who said, “We uphold the unity of the Syrian territories and we stand by the Syrian Arab Army in its fight against terrorism. Our choice in the upcoming elections will be the President Bashar al-Assad, who represents our guarantee for Syria’s national security.”

Fadel Najjar, the governor of Deir ez-Zor, said in a March 22 statement to Al-Watan newspaper, which is close to the Syrian regime, “Adhering to the leadership of the president is the choice of the Arab tribes in the next stage.”

“We will reciprocate with loyalty to the president, who has remained steadfast in this war,” he added.

Al-Watan also quoted Sheikh Abboud al-Fares of the Akidat tribe as saying, “The [tribal] forum was held for a purpose, which is to show support for the president in the [upcoming] elections. The tribes of Deir ez-Zor, from Abu Kamal to the border of Raqqa, send a message to the world that they stand by the president to lead the nation.”

A source from the Bakara tribe who participated in the tribal forum in Deir ez-Zor told Al-Monitor on condition of anonymity for fear of security reprisal, “The meeting took place in the sports hall in the city of Deir ez-Zor under the title ‘Assad is our choice.’ The preparations for the forum have been underway since mid-March.”

“Raed al-Ghadhban, the secretary-general of the Baath Party’s [Deir ez-Zor] branch, sent invitations to tribal sheikhs across Deir ez-Zor, which is under the regime’s control, to attend the meeting for the support of Assad in the upcoming presidential elections,” the source added.

He also said, “Several officers affiliated with the Russian forces and several leaders of the Moscow-backed militias, such as Liwa al-Quds, took part. A number of leaders of the Iranian militias were also present, as well as Brig. Nizar al-Khodr, the head of the Security and Military Committee in Deir ez-Zor.”

“The tribal forum was held with the blessing of the Russian and Iranian forces present in Deir ez-Zor. Moscow and Tehran are helping the regime to court the tribes ahead of the presidential elections,” the tribal source added.

In his speech during the caucus, Mukhtar Omar al-Izzi al-Naqshbandi, the head of the Deir ez-Zor Endowments Department, thanked the Russian and Iranian forces for supporting the regime in the province and called for the reelection of Assad.

Suhaib al-Jaber, a journalist with the Euphrates Post, a local opposition platform focusing on developments in Deir ez-Zor, told Al-Monitor, “One of the sheikhs who were present at the caucus for the support of Assad in the next elections is a man named Sheikh Ghanem Suleiman al-Fayyad, who had been a member of the public relations committee of the Islamic State (IS) in the countryside of Deir ez-Zor.”

Jaber said that according to the Euphrates Post archives between 2016 and 2021, Ghanem has previously “stated his support for IS leader Abu Bakr al-Baghdadi. But shortly before to the tribal meeting, Ghanem stressed his support and loyalty to Assad. A large number of the participating sheikhs have been backing the regime forces in their war against the Syrian revolution since 2012.”

Abdel Salam Sarout, a journalist and director of Naher Media, a website covering news in eastern Syria, told Al-Monitor, “The Assad regime is trying to bank on the tribes in Deir ez-Zor and the rest of areas in eastern Syria, where the community abides by the decisions of the sheikhs of the tribes. This is why the regime has been courting and supporting these tribes with funds and privileges to ensure that tribal members would join its military ranks and pledge total allegiance to Assad, which is what has actually happened during the caucus.”

“Undoubtedly, there were a number of sheikhs who participated in the meeting but who do not support Assad. They did not have any other choice as they face arrest and pressure by the regime-affiliated security services,” Sarout added.

Tribal gatherings and caucuses under regime sponsorship have been a common occurrence in recent years in several Syrian provinces in a bid to gain the sheikhs’ loyalty.

The war that has been raging for 10 years now, dividing the country into multiple areas of influence, also impacted the unity of the tribal community, causing the pulverization of one tribe into several smaller ones under the leaderships of different sheikhs, depending on the areas they are located, be they under the control of the regime, the Arab opposition or Kurdish forces.