Who is behind wave of killings of tribal sheikhs in east Syria? 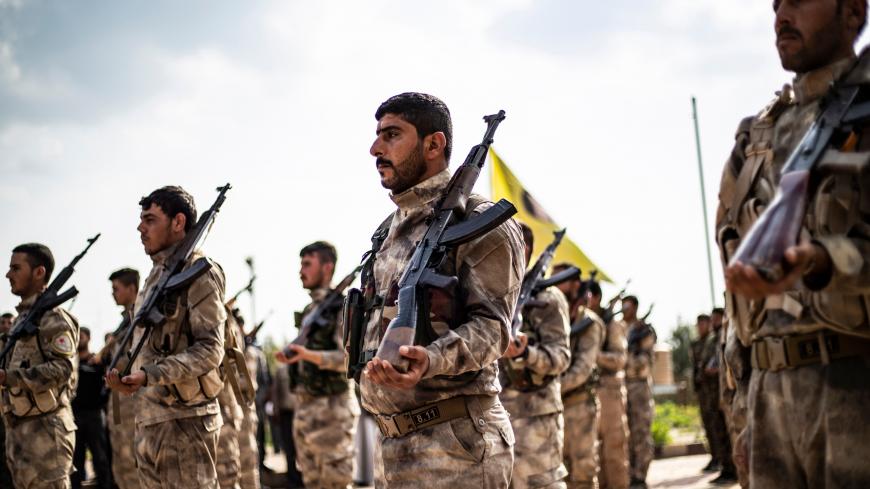 Members of the Kurdish-led Syrian Democratic Forces (SDF) attend the funeral of an Arab fighter in the SDF who was killed the previous week in eastern Deir ez-Zor province, in the northeastern Syrian Kurdish-majority city of Qamishli in Hasakah province on April 10, 2019. - DELIL SOULEIMAN/AFP via Getty Images

Matsher Hamoud al-Hafl, a sheikh from the Akidat tribe, the largest in Syria’s eastern province of Deir ez-Zor, was killed and Sheikh Ibrahim Khalil Abboud al-Gedaan al-Hafl was wounded when unknown gunmen shot them in the village of Hawayej on Aug. 2 in the eastern countryside of Deir ez-Zor province.

The Akidat tribe is one of the largest Syrian tribes. It has between 700,000 to 800,000 members who live on the banks of the Euphrates River in Syria, and in Iraq and the Gulf states, a spokesman of the Supreme Council of Syrian Tribes and Clans, Modar al-Asaad, told Al-Monitor. Prominent figures in the tribe in Syria normally carry out mediation between the Syrian Democratic Forces (SDF) and residents of Deir ez-Zor, particularly when it comes to taking families out of the al-Hol camp in eastern Hasakah province in exchange for money. The camp houses Islamic State (IS) families.

On July 31, unknown men killed Sheikh Ali Salman al-Waiss, a prominent figure in the Bakara tribe, on the morning of the first day of Eid al-Adha in al-Dahla village in the eastern countryside of Deir ez-Zor, which is under SDF control. The head of the al-Baqir tribal committee was also killed.

Tribes staged protests Aug. 4 condemning the targeting of the sheikhs and the ongoing security chaos in Deir ez-Zor. In Hawayej, SDF members shot civilians at a school in an attempt to disperse crowds. In response, some inhabitants took over the school and expelled the SDF members.

The Akidat tribe gave the international coalition forces and the SDF a month to hand the killers of Hafl over. In a statement released Aug. 4, Sheikh Masaab Khalil Abboud al-Hafl, who succeeded Hafl as leader of the tribe, said, “If this [handover] does not happen, the tribe will do as it sees fit to protect its territory and properties.”

Hafl called on tribal members to “unite to protect the tribe from those exploiting its members’ blood and looting its fortunes. A territory that is not protected by its inhabitants cannot be protected by greedy strangers.”

He further stressed the need to hold a meeting for all tribes of the region to discuss the latest developments and take the necessary measures.

The area in eastern Syria on both banks of the Euphrates is mainly inhabited by tribes, with around 500,000 people belonging to various tribes, namely Akidat, Bakara, Jubur, Bu Layl, Al Bu Saraya and Juheich.

Meanwhile, the Kurdish self-rule administration in north Syria denied being behind the wave of killings of tribal sheikhs and condemned the slayings, dismissing the set of deaths as “a terrorist act targeting Syrians’ lives to serve hypocritical agendas.”

The administation expressed in a statement its determination, through its military forces and security apparatus, to eradicate all hotbeds in self-rule areas, wherever they are, adding that it “will not let this cowardly act pass without finding out who the culprits are, holding them accountable and handing them over to the parties concerned to get their fair punishment.”

Asaad, who is based in Istanbul, saw things differently. The spokesman of the Supreme Council of Syrian Tribes and Clans told Al-Monitor that when the SDF failed to control Jazira and the Euphrates, it undertook a plan to kill prominent Arab tribal figures after humiliating them at various checkpoints between villages and cities. He said Kurdish forces carry out, in broad daylight, killings of Jazira and Euphrates figures protesting the SDF's presence and project.

Asaad also said, “The Syrian regime is trying to return to the areas in the Deir ez-Zor countryside, especially those that have underlying resources. It wants to make a return through these tribes or some of their sheikhs who still pledge allegiance to it [the regime] in those areas and through loyal tribal sheikhs who are not popular within their own tribes and whose members are mostly against the regime.”

He added, “Turkey stands with the Syrian people’s rights and supports the tribal rule of their areas instead of the Kurdish forces that discriminate against Arabs. The tribes refuse the presence of Kurdish militias in their areas. This is where Turkey’s interests and those of Syrian tribes overlap. Turkey rejects the rule of Kurdish parties over these areas and the return of the regime to them. Syrian tribes have benefited from Turkish support in the media and economically.”

Al-Monitor met with journalist Zein el-Dine of the Akidat tribe, who lives in the Deir ez-Zor countryside. He said, “Arab tribes accuse the SDF of being behind the assassinations of several of their sheikhs for many reasons. For one, the SDF controls the area and has a duty to protect it. The SDF is also trying to exclude the Arab component from ruling the mostly Arab areas, and it is taking advantage of the presence of Islamic State cells in those areas to blame them for any assassination or theft. For all these reasons, Arabs have grave concerns when it comes to the Kurdish forces.”

He added, “The regime is trying to show that the incidents reflect a tribal revolution against Kurdish parties and their backers like the US-led international coalition, and it used this narrative in the media. Russia [recently] met with several tribal sheikhs to sow the seeds of revolution against Kurdish forces for what is in the regime’s interest. But all these meetings failed because the sheikhs do not have actual influence on the ground.”

Dine continued, “Turkey is also taking advantage of any disputes among the Arab tribes and Kurdish parties to show support for the Arab component and the tribes to fulfill its interests in fighting Kurdish parties — Turkey’s traditional foe. Each side is trying to use the tribal card, and the SDF and the international coalition are doing the same. Through its streaming of some meetings with tribes, the SDF appears to have wide support for its rule. The US has been following suit. Meanwhile, the tribes are known to change their loyalties to whoever is in control, but this has almost always turned against them [tribes].”

In a statement posted on its Facebook page Aug. 3, the US Embassy in Syria denounced the attack on the Akidat tribe’s sheikhs in Deir ez-Zor. The statement relayed US condolences and stressed that “violence against civilians is unacceptable and impedes the hope for a lasting political resolution to the conflict in Syria.”

Foreign actors have always sought the support of tribes throughout the history of Syria given their important role and weight among their peers, from the Ottoman empire to British rule. Indeed, this continues to the present day, with Turkey, the Syrian regime and the SDF trying to befriend the tribes. Meanwhile, tribes are seeking a prominent role in managing the region alongside the SDF, which explains why they have been courting the US-led coalition to pressure the SDF into giving them their own area of control, or at least include them in the rule.