Will Hezbollah, Iran avenge the killing of Kuntar?

The killing of veteran terrorist Samir Kuntar, adopted by Hezbollah, is perceived as a blow to Iran, which supported and nurtured Kuntar over the past year. 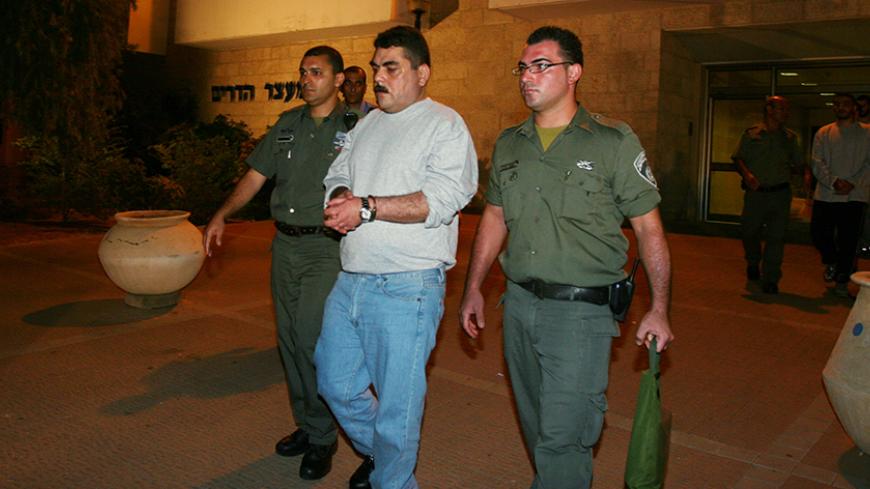 Officially, Israel hasn't assumed responsibility for the killing of Lebanese Druze terrorist Samir Kuntar during the night of Dec. 19-20. Kuntar was sheltering with a group of terrorists, including Farhan al-Sha’alan, in a home in the town of Jaramana, south of Damascus, when guided air-to-ground missiles fired from distant warplanes slammed into the building, causing it to collapse on everyone inside. Hezbollah is blaming Israel for the attack, but so far, Israel has not responded officially.

The general assumption among the international community is that the Israeli air force conducted the operation, after receiving precise intelligence in real time. This allowed it to settle the score with one of the most detested terrorists in Israel’s history. Three rockets were fired from Lebanese territory into Israel on the afternoon of Dec. 20, but there were no casualties or damage. These rockets were fired by Ahmed Jibril’s Popular Front General Command. Still, based on the Israel Defense Forces' (IDF) assessment, the real response to Kuntar’s assassination is yet to come. The rockets on Dec. 20 were little more than a three-gun salute in honor of Kuntar.

The most interesting questions are: How will Hezbollah respond? How will Iran respond? What exactly is happening on that sensitive front, where the Israeli air force meets the Russian air force, in the sensitive Golan Heights border triangle between Israel, Lebanon and Syria, but also in the skies over Damascus? This operation in which Kuntar was killed is the latest in several other aerial attacks attributed to Israel, which have occurred in the Damascus sector and other regions of Syria.

The most intriguing issue now as far as security and military international forces are concerned — Americans, Europeans and Iranians — is whether the sophisticated Russian radar systems recently installed in the region “locked” on the warplanes, which fired the missiles that killed Kuntar. Were the pilots, apparently Israeli, targeted while they were bringing up the house in which Kuntar was hiding on their own target screens? Was there any communication between those pilots and those who identified them on the radar? Assuming that the pilots were Israeli, was there any prior coordination between Israel and Russia before the attack? With Kuntar serving as its operative for the past few months, how will Iran respond? How will Hezbollah Secretary-General Hassan Nasrallah respond? The night of Dec. 21, Nasrallah, in a speech in Beirut, threatened retaliation against Israel over the assassination of his “beloved son,” Kuntar.

Israel has faced off against numerous arch-terrorists throughout its history. Most recently, these have been Mohammed al-Deif, the “Father of Gaza Terrorism,” whom the IDF has tried and failed to assassinate on five separate occasions, and Imad Mughniyeh, the theorist and founder of Hezbollah terrorism, who was assassinated in Damascus in February 2008, in an intelligence operation attributed to the Mossad and CIA.

About five months after the assassination of Mughniyeh, Israel released Kuntar in a controversial prisoner exchange with Hezbollah. Kuntar is better known to Israelis than the other two men and much more despised. He was also much less dangerous. Unlike them, Kuntar has a face, a smile and a propensity for brutality that staggers the imagination.

Kuntar earned this hatred legitimately. It all goes back to the dramatic night of April 22, 1979, which will never be erased from Israel’s memory. Kuntar, a 16½-year-old Druze from Mount Lebanon, infiltrated Israel at the head of a squad of four terrorists from the Palestine Liberation Front. They arrived in Israel in a rubber dinghy, which landed near the Nahariya beach up north. After killing an Israeli policeman, they broke into the Haran family home, taking Danny Haran, 31, and his daughter Einat, 4, hostage. Smadar, the mother, hid in a storage space above the bedroom, together with her daughter Yael, 2, while Kuntar and the other terrorists searched the house for other family members. In an effort to silence her toddler, Smadar accidentally smothered her to death. Meanwhile, the terrorists took the father and surviving daughter to the beach, where they tried to negotiate with Israel’s security forces. At some point, Kuntar shot and killed Haran right in front of his daughter. He then smashed her head in with the butt of his gun.

In the battle that developed between the terrorists and the Israeli police forces, two members of the terrorist squad were killed. Kuntar and another terrorist named Ahmad Abras were caught. Abras was released in 1985 as part of the Jibril deal, in which 1,150 security prisoners were swapped for three Israeli hostages. Kuntar, who had become the symbol of the despicable crime of killing a father right in front of his daughter, and then smashing the young girl’s head in, was ineligible for release. As if the story wasn’t colorful enough, during those years Kuntar grew a mustache modeled on Hitler’s. But time took its toll. In 2008, after serving 29 years of a life sentence, Kuntar and four other terrorists were eventually released from Israeli prison, in exchange for the bodies of two Israeli soldiers, Eldad Regev and Udi Goldwasser, who were kidnapped and killed in 2006 in an incident leading up to the Second Lebanon War. Up until the very last moment, Israel had no idea whether Regev and Goldwasser were still alive, or whether they had been killed at the time of their abduction. Hezbollah engaged in a long, public campaign of emotional extortion against the Israeli public and its government, until it finally got Kuntar back in exchange for the coffins of two Israelis.

With the passing of time and the dulling of the trauma, Israel began to hope that Kuntar, now somewhat older (he was 53 when he died this week), would soon vanish from the terrorist landscape. “All in all,” said one former top Mossad official to Al-Monitor, on condition of anonymity, who had dealt with the Kuntar issue, “We’re talking about a very inept terrorist, who only excelled in cruelty. He was a despicable murderer, but he did not pose a real threat, like Mohammed Deif or Mughniyeh.” Kuntar thought differently. Instead of building a calm new life for himself in the home that was built for him and with the wife who was chosen for him well ahead, he became a symbol of Hezbollah’s struggle. He volunteered to build a new terrorist network that would open a second front against Israel on the Golan Heights.

The network that Kuntar put together was amateur. It had very few successes, and it was apparently riddled with intelligence leaks, so that most of the attacks it was planning were foiled by the IDF with time to spare. The problem was that Kuntar tried to base his terror network on the Druze community, contributing to a deterioration of the relationship between Israel and the Druze living in the Syrian Golan Heights and the surrounding areas. Nevertheless, in the hierarchy of Israel’s most dangerous enemies, Kuntar never made the top tier. At some point, Nasrallah realized that Kuntar would never provide him with any real benefits and withdrew from him. Over the last year, he received the backing and support of Iran’s Islamic Revolutionary Guard Corps instead. They helped him rebuild his terrorist network, which had suffered many significant blows at the hands of the IDF. That's why the attack against him is considered a resounding blow to Iran’s prestige, no less than an assault on Hezbollah. Now, all that is left to do is wait for a response.

The current estimation is that any response by Iran and Hezbollah will be minimal. Hezbollah is overextended across Syria and southern Lebanon. It is exhausted and bleeding heavily. The fighting is intense, with no end in sight. The number of casualties is accumulating, with Israeli intelligence sources assessing last week that Hezbollah has already lost about one-third of its total fighting force (counting dead and wounded). And the situation facing Iran is no less complicated. The nuclear deal with the world powers is now in the most sensitive stage of its implementation. Sanctions have not been lifted yet, and the economic situation in the country is still severe. War with Israel is the last thing that Iran's Supreme Leader Ayatollah Ali Khamenei needs right now.

It is quite possible that these circumstances led to the decision, attributed to Israel, that the time was ripe to eliminate Kuntar. It is much more reasonable to assume that Israel was taking advantage of intelligence in real time to foil a specific, planned future terrorist attack. Kuntar had been plotting new attacks on Israel in the Golan sector and continued to stir up trouble between it and the Druze minority in Syria. By doing all this, he signed his own death warrant and helped whomever it was to settle a historic score, 36 years after it all began.