An attempt to block Arab Knesset member Heba Yazbak from running in the March elections for allegedly voicing support for a terrorist raises the issue of whether the same should apply to Otzma Yehudit leader Itamar Ben-Gvir. 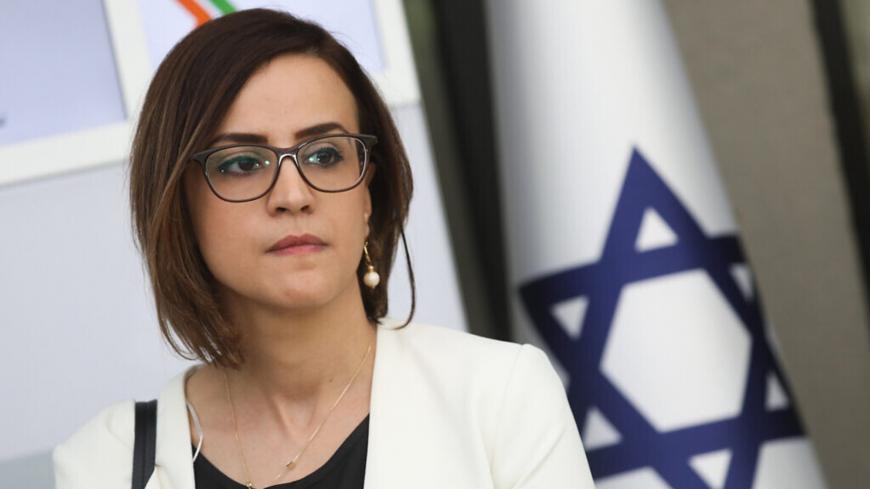 The fate of Knesset member Heba Yazbak is to be decided by the Supreme Court. Posted Jan. 21, 2020. - Twitter/@enlacejudio

Appended to the petitions are a slew of remarks said to prove that Yazbak praises terrorists. For example, the day after the killing of Samir Kuntar in December 2015, she posted his photo on her Facebook page and wrote, “I did not return from Palestine [referencing his years in an Israeli jail] only in order to return to Palestine” and referred to him as “al-shahid al-mujahid,” which roughly translates as “martyred warrior.”

In April 1979, Kuntar and another person entered the home of the Haran family in the Israeli-Lebanese border town of Nahariya, kidnapped the father, Danny, and his four-year-old daughter Einat, and took them to the beach. Israeli soldiers surrounded them and Kuntar shot Danny dead and crushed Einat’s skull with the butt of his Kalashnikov. In 2008, he was released from an Israeli jail as part of a deal with Hezbollah, in return for the bodies of Eldad Regev and Udi Goldwasser, two Israeli soldiers abducted by the organization. After Kuntar's release, he joined Hezbollah's senior leadership and eventually landed on the United States' terror watch list. In 2015, he died in Syria in an attack on the building in which he was staying. The rebel Free Syrian Army, opposed to President Bashar al-Assad's regime, claimed responsibility, but Hezbollah blamed the Israeli air force for Kuntar's assassination.

Kuntar was not the only person Yazbak honored with the designation mujahid (holy warrior). Over the years, Yazbak shared posts and photos of other shahids (martyrs) with blood on their hands. In 2013, for example, she posted a photo of Dalal Mughrabi and wrote, “She managed to do so much although she was killed at the age of 20. I salute women’s resistance.” Mughrabi was a member of a Palestinian Fatah terror squad that infiltrated Israel from Lebanon in 1978 and hijacked a bus near Haifa. Thirty-five Israelis, including 12 children, died in the attack.

Many of Yazbak’s remarks had been presented to the Supreme Court prior to the September 2019 elections in a challenge submitted by Otzma Yehudit against the Central Elections Committee approving Yazbak’s inclusion on the Joint List ticket. The justices made no bones about their opinion of Yazbak. Justice Yitzhak Amit wrote, “Samir Kuntar crushed the skull of a baby. Identifying with him is a shame and a disgrace, with three exclamation marks. Identifying with him with a quarter of a finger nail is a disgrace.” Chief Justice Esther Hayut held, “[Yazbak's] expressions are support for a terror organization.”

Nonetheless, the court did not disqualify Yazbak's candidacy because the petition had been filed against the entire Joint List, not Yazbak alone. Now, ahead of the March 2 elections for the 23rd Knesset, three petitions have been submitted specifically against her.

The petitioners, all on the political right, are expected to receive backing from the center-left. The centrist Blue and White, the current front-runner, backs the petitions, and the Labor Party is inclined to do so as well. “The petition to disqualify Yazbak is undeniably justified and must be supported unreservedly,” declared Itzik Shmuli, head of the Labor-Gesher Knesset faction. The left-wing Meretz, running with Labor-Gesher in the March elections, is, however, opposed. Knesset member Yair Golan, seventh on the Labor-Gesher-Meretz ticket, tweeted, “I am uncomfortable reading Yazbak’s Facebook comments, but disqualifying a law-abiding citizen from running is to reward the detractors of Israeli democracy. Let us focus on disqualifying a gang of violent law breakers [i.e., settlers] who have been clashing with police and soldiers their entire life, because in a democracy, people are disqualified over their actions and not over sharing outrageous comments on Facebook.”

Golan is wrong. Under the Basic Law: The Knesset, Article 7A, a person is ineligible to run if his or her remarks, whether implicitly or explicitly, negate Israel’s existence as a Jewish and democratic state, incite to racism or support armed struggle by an enemy state or a terrorist organization. Yazbak's denial and those of her Balad and Joint List colleagues, who argue that she did not support Kuntar’s actions and was only expressing her reservations about his assassination, remain unconvincing. She would not have used the words “shahid” and “mujahid” unless she was trying to express regret over the death of a man who murdered members of an Israeli family.

This, however, raises another issue. Is everyone who expresses support for acts of terror ineligible to run for the Knesset? That does not appear to be the case.

In the living room of Itamar Ben-Gvir, a leader of Otzma Yehudit, hangs a portrait of Baruch Goldstein, the Jewish settler who slaughtered 29 Muslim worshipers in Hebron in 1994. Nonetheless, the Supreme Court did not ban his run in previous elections. Not only did Prime Minister Benjamin Netanyahu not petition for his disqualification, he “whitewashed” him as a legitimate political contender and recently offered him an ambassadorial appointment as an incentive for his party to bow out of the elections to avoid wasting tens of thousands of right-wing votes if the party failed to cross the electoral threshold necessary to enter the Knesset.

The petition by the racist Otzma Yehudit to ban Yazbak is the height of absurdity. Ben-Gvir argues in the petition that a “critical mass” of evidence proves that Yazbak supports terrorism, praises terrorists and killers of Jews and tries to justify acts of terror.

Balad Chair Mtanes Shehadeh told Al-Monitor that his party vehemently opposes the killing of anyone. “We favor a legitimate popular struggle,” Shehadeh said. “This is a principled position, and Heba Yazbak fully supports it.” Shehadeh expressed surprise that Labor and Blue and White had joined the strident calls on the right, adding that when the time comes, the Joint List in determining its position will take into account those who backed the disqualification of their colleague. In other words, if the Labor and Blue and White representatives on the Central Elections Committee do, indeed, vote for Yazbak’s disqualification, the Joint List should abstain from actively or passively supporting a future government led by Blue and White chief Benny Gantz.

Knesset member Ofer Cassif, a Hadash representative on the Joint List whom the Central Elections Committee disqualified from running but the Supreme Court reinstated, told Al-Monitor, “One can agree that she made a mistake, but nowhere did she express support for terrorists. She objected to Kuntar’s assassination, and that is like me expressing opposition to the assassination of [Iranian commander] Qasem Soleimani [by the United States]. I do not support his actions, of course, but I oppose assassinations in general, just as I objected to the assassination of Minister Rehavam Zeevi [by a Palestinian in 2001]."

Cassif said he had spoken with Yazbak and that she “in no way supports terrorism.” He asserts that the radical Jewish right, whose adherents riot like gang members, and neo-Nazi organizations, like Lehava, have replaced controversial former Arab Knesset member Haneen Zoabi with Heba Yazbak as the target for their harassment.

Cassif is not hopeful about Yazbak’s prospects. “The chief justice has already expressed her view and opened the door to her disqualification,” he said.