Hezbollah is opening another front against Israel in the Golan Heights, where it can blame other organizations for possible escalations. 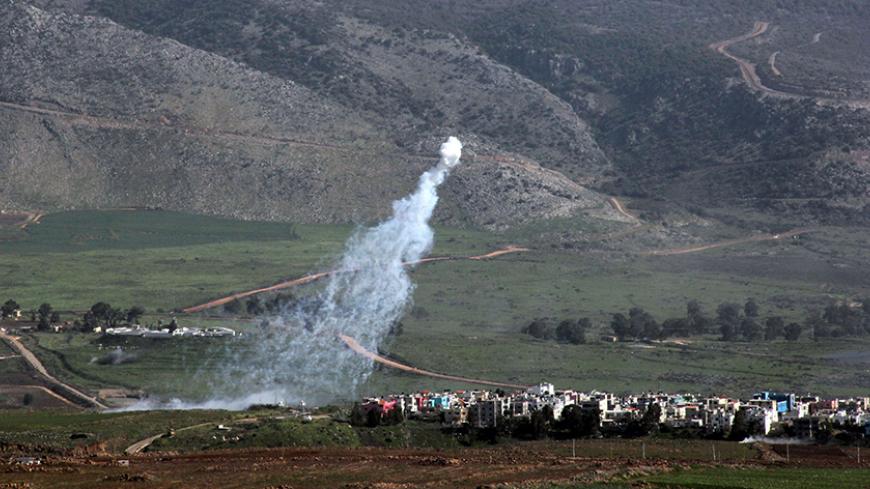 Smoke from Israeli shelling covers the Lebanese town of Al-Majidiyah (L) on the Lebanese border with Israel, as the town of Al-Ghajar is seen on the right, Jan. 28, 2015. - Getty Images/Ali Dia

Whoever listened to IDF (Israel Defense Forces) spokesman Brig. Gen. Moti Almoz at the impromptu news conference he convened on the evening of Jan. 28 near the Northern Command headquarters could hear the expressions "prudence" and "responsibility" many times. It was no coincidence that Almoz, an experienced and level-headed officer, used these very words. It seems to me that both in his subconscious, as in that of IDF general staff seniors, one could hear a silent prayer; all the decision-makers on both sides of the border should employ these same qualities (prudence and responsibility) as much as possible. I express my own opinion when I say that, but I bet that many IDF top brass members were worried the night of Jan. 28 about the extent of prudence and responsibility, mainly on their side, the Israeli side.

On the morning of Jan. 29, while these words are being written, the overall impression is that prudence and responsibility won out. This is a short-term victory. This round in the regional war between Israel and Iran and Iran's proxies (Hezbollah and Syria, in that order) ended in a tactical draw, but with a prominent strategic victory for Israel.

The tactical draw stems from the fact that, according to foreign media sources, Israel destroyed two Hezbollah and Syrian vehicles on Jan. 18, and in retaliation Hezbollah destroyed two IDF vehicles. A strategic victory was declared because Hezbollah killed a Givati infantry brigade officer and soldier. This is a painful loss, especially in Israeli society, which is very sensitive to the loss of its soldiers, even more than its civilians. But by contrast, according to foreign media sources, Israel wiped out all the elites of a terrorist branch that was being formed on the Golan Heights border fence. This included the son of Imad Mughniyeh, Hezbollah's mythological hero (who was eliminated in Damascus in an operation attributed to Israel exactly seven years earlier, in 2008). Thus, significant and substantial damage was leveled on Iranian-Hezbollah efforts to establish another front vis-à-vis Israel on the Golan Heights — a front that was supposed to be risk-clean and of few serious dangers. It will take them time to recreate this undertaking while knowing that Israel is vigilantly keeping close tabs on developments and will not hesitate to use force when it reaches the conclusion that the infrastructure being constructed in its vicinity is nearing the danger point.

Prime Minister Benjamin Netanyahu and Defense Minister Moshe (Bogie) Ya'alon made a very difficult decision the night of Jan. 28. At this point, all the considerations, security and political, united in one single vortex.

Practically, it was clear to them that Hezbollah's reprisal for the attack on the convoy in the Golan on Jan. 18 attributed to Israel was legitimate and within the context of the rules of the game. One attack on a military convoy for another; tit for tat.

According to IDF intelligence, Hezbollah made a real effort to retaliate in a way that would allow Israel to "contain" its own response, not to go overboard and thus allow all the players to leave the corners they had painted themselves into. The issue is that there is another factor to be entered in the equation: Israel's coming elections, due to be held a bit more than six weeks from now on March 17. For Netanyahu, it is important to shift the election agenda away from socio-economic issues, his well-known weak point, to the diplomatic-security sphere. The latter field is Netanyahu's comfort zone in which he enjoys a significant advantage over his main rival, Zionist Camp leader Isaac Herzog.

On Jan. 28, Herzog was forced to surround himself with two former generals, Amos Yadlin (Herzog's candidate for defense minister) and Eyal Ben-Reuven (Tzipi Livni's candidate to the Knesset list), and together with Livni go up to the Golan Heights. When Herzog dons the traditional battledress reserved for Israeli leaders in wartime, he looks as if he got caught in the situation by mistake. By contrast, battledress looks a lot more natural on Netanyahu and Ya'alon. For Netanyahu, a continued skirmish in the north, including the exchange of threats and pretentious proclamations between all the players, is vital to his efforts for re-election. On the other hand, one can never know what the morrow will bring in such situations; it is always possible to suddenly find oneself in an all-out, unplanned war. Ultimately, it seems that Netanyahu's innate caution and apprehensiveness won out, and he decided to practice restraint. At least until further notice.

From the get-go, neither side was interested in a deterioration into an all-out military flare-up. Hezbollah is already stretched to its limits on three fronts. According to Israeli assessments, three-quarters of Hezbollah's combat forces are occupied in various Syrian regions or the front vis-a-vis Islamic State (IS) and other organizations in northern Lebanon. The organization is suffering heavy losses, and its popularity in Lebanon is seriously waning. On the night of Jan. 28, bitter internal complaints were heard in Lebanon even among Shiite politicians (Lebanese Option Party leader Ahmed al-Asaad, for example, who was interviewed on local television stations), and not only from the Christians, Druze and Sunnis.

Therefore, the estimate on the eve of the attack of Jan. 18 was that the risks of escalation and comprehensive deterioration following this move were not high.

In addition, ever since the Protective Edge operation, Defense Minister Ya'alon must prove himself to the right-wing voters, the Likud Party traditional electoral base. HaBayit HaYehudi leader Naftali Bennett — young, vibrant, creative and with a sense of initiative — keeps attacking Netanyahu and Ya'alon from behind, from the moment he almost forced them to act against the Hamas terror tunnels. This week was allegedly Ya'alon's opportunity to demonstrate that he does not fear taking an initiative and that he does not compromise over fighting terror.

Immediately after the operation in the Syrian Golan, it was clear for Israel that a speedy, painful retaliation was in the cards. Israeli intelligence warned that Hezbollah was planning to respond with force in the short term. As opposed to Hezbollah's delayed reprisal of four years after Imad Mughniyeh's elimination in 2008, this time it was clear that it would happen quickly. Thus the IDF, on its part, began to adopt deterrence measures including large aerial and armored military exercises in the Golan Heights and a massive reinforcement of forces. The defense minister and the chief of staff were also seen arriving there, and so forth.

Hezbollah proved that it is an organization that operates pragmatically out of cold considerations of feasibility, timing and interests. The location of the assault on the Israeli patrol was picked with precision: close to the Shebaa Farms, viewed by Lebanon as territory occupied by Israel. Hezbollah would have preferred to retaliate from the Golan Heights but the Iranians, who are trying to protect Syrian President Bashar al-Assad with all their might, compelled the organization to retaliate from Lebanon. At this point in time, Hezbollah cannot allow itself to drag Lebanon into another war of attrition against Israel. Therefore, it purposely chose a military patrol in the Shebaa Farms as its target, and not civilian targets.

"Hezbollah did everything it could to make it easier for us to contain our response," said a senior IDF officer. "On the one hand, [Hezbollah Secretary-General Hassan] Nasrallah could not allow himself not to respond. The assault on Jan. 18 humiliated him in front of everyone. He came out as a liar, because only a few days earlier he denied all involvement in the Golan. Mughniyeh's son was killed and the command post of this terror infrastructure was eliminated. Nasrallah retaliated, but in a precise, responsible way, as far as he is concerned."

The current clash between Israel and Hezbollah/Iran is being waged on the Golan Heights. With regard to Lebanon, Hezbollah is being doubly cautious. Israel has already announced that should fire be opened on it from Lebanon, or terrorist attacks on it emerge from Lebanon, it will declare war on Lebanon, not on Hezbollah. On the evening of Jan. 28, when the IDF went into high alert and air force aircraft fired up their engines, the bank of targets placed in front of them was entirely Lebanese. "This time," said a high-ranking Israeli security source, "the mistake of the Second Lebanon War will not be repeated. Lebanon will have no immunity; the country will be destroyed to its foundations if Hezbollah tries to harm us."

That is the reason that Hezbollah, under Iranian command and Syria encouragement, is trying to open up a "second front" against Israel on the Golan Heights. From Hezbollah's point of view, the Golan Heights is no man's land. From there, it can launch terrorist and shooting attacks without bearing responsibility for it, hiding behind various "rebellious forces" involved in the Syrian war on the Golan Heights.

This was the reason that, according to foreign media sources, Israel launched airstrikes on the command post of the new terror infrastructure in the Golan. Preceding Jihad Mughniyeh had been Samir Kuntar, a Lebanese murderer who smashed the skull of an Israeli child on a rock in the northern Israeli town of Nahariya, in one of the harsh terror attacks waged in Israel from Lebanon, in April 1979. Kuntar was released in a 2008 prisoner swap, then as a Hezbollah proxy tried to establish terrorist infrastructure in the Golan. This infrastructure was, according to Israeli security sources, "amateurish and ineffective. Here and there, they dropped mortars and hid explosive charges on the border fence. Nothing sophisticated or creative," said an Israeli officer who serves in the Northern Command.

When Hezbollah understood that this wasn't working, the young Mughniyeh was recruited into the project with professional and high-placed members of Hezbollah's Radwan units. All these operated under the umbrella and directives of an Iranian general, with the direct assistance of Revolutionary Guards, and under Syrian patronage. This infrastructure was already much more dangerous, there was no choice but to attack it while it was still small.

There was another motive behind this activity of Hezbollah and Iran on the Golan Heights. Nasrallah and especially Tehran (and certainly Assad as well) were troubled that Israel had succeeded in changing the rules of the game by carrying out repeated aerial assaults in Syria (according to foreign media sources) without paying a price. Israel had created new red lines in which it would not allow tie-breaking weapons to cross from Syria to Lebanon, and according to what is attributed to Israel, it attacked all the convoys that intended on doing just that (once it took place on Lebanese territory).

Hezbollah tried to raise the bar on its side as well: You're taking action in Syria? Then we will operate against you from Syria as well. And this threat (according to foreign media sources) was uprooted by Israel on Jan. 18, for which Hezbollah retaliated on Jan. 28. Meanwhile, the Iranians are limiting themselves to verbal threats, but they will not forget the killing of their general. In Israel, no one has a doubt that Iran will also retaliate sometime. But now, in any case, it is not in the near view.

Iran and Hezbollah have only one strategic objective in the region and none other: preserving Assad's regime, in its current, reduced configuration. All other interests are subordinated to this one. At the moment, a frontal conflict with Israel would only endanger Assad even more, almost certainly leading to his final collapse. So the confrontation is postponed. To be continued.