Israeli security experts estimate that although Hezbollah is not interested in raising tensions with Israel, it will respond to the Jan. 18 attack on its convoy, either in the Golan Heights or against Israeli targets abroad. 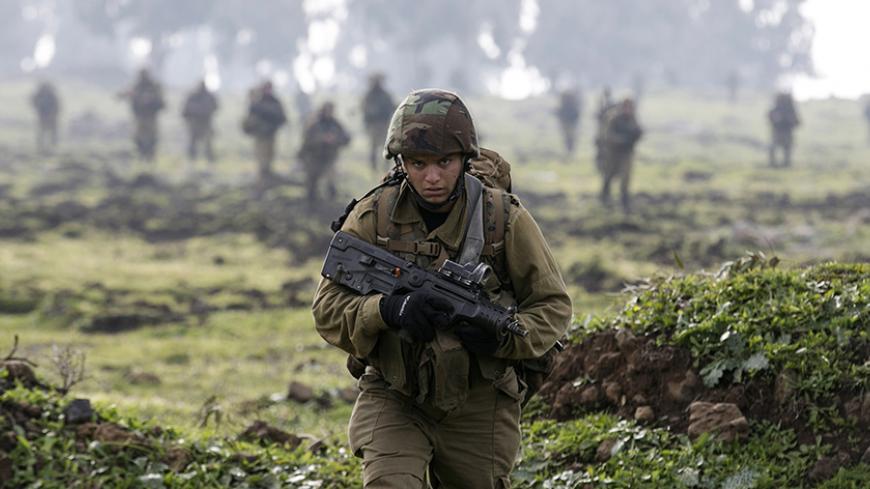 An Israeli soldier from the Golani Brigade takes part in training near the city of Katzrin in the Golan Heights, Jan. 19, 2015. An Israeli airstrike in Syria killed an Islamic Revolutionary Guard Corps general and a commander from Lebanon's Hezbollah, the son of the group's late military leader Imad Mughniyeh. - REUTERS/Baz Ratner

Just imagine a Hollywood screenplay depicting an Israeli airstrike against a convoy of vehicles in the Syrian Golan.

In this scenario, six high-level Hezbollah officers are eliminated, including Jihad Mughniyeh, son of Imad Mughniyeh — who was himself eliminated in 2008 — and six Iranian officers, including a high-ranking general in the Islamic Revolutionary Guard Corps.

Then, a few hours later, the body of the federal prosecutor of Argentina is found in his house, dead of a gunshot wound, only a few hours before his testimony to prove that his country’s government whitewashed the Iranian involvement in the great terror attack on the Jewish Community Center in Buenos Aires in 1994. By the way, that same 1994 terror attack in Buenos Aires was attributed to the aforementioned Imad Mughniyeh. And now, try to find a Hollywood studio willing to produce this “unrealistic” screenplay and turn it into a movie. It would be very hard, indeed.

As we know, reality beats imagination hands down; in fact, this scenario actually took place on the morning of Jan. 18. A convoy of three military vehicles, traveling not far from Quneitra in the Syrian Golan Heights, suddenly blew up. Initial reports in Lebanon mentioned an Israeli Apache helicopter, but later on it emerged (from a UN spotters’ report) that two unmanned aircraft crossed the border from the Israeli to the Syrian side, then returned.

A glimpse at the remnants of the blown-up convoy strengthened the assessment that no one survived the inferno. Only after about half a day had passed did it emerge that the bombers had “won the jackpot”: Jihad Mughniyeh was the son of Hezbollah Chief of Staff Imad Mughniyeh, who had been eliminated in Damascus in February 2008 in an operation attributed to Israel. But Jihad Mughniyeh was small fry compared with the others killed. With him in the convoy were also Hezbollah and Revolutionary Guard senior officials, including Gen. Mohammad Allahdadi, who had served as an Iranian military attache in the Syrian army. The bombarded convoy also included senior officers from the Raduan Force, considered Hezbollah’s elite unit. This force is also considered as Hezbollah's “rapid Intervention force.” Hezbollah Secretary-General Hassan Nasrallah counts mainly on this force to fight Israel in the next round of hostilities by invading Israeli territory and taking over Israeli population centers for the first time since 1948.

Officially, Israel maintains its silence, neither confirming nor denying responsibility. The Israeli government's “home newspaper” Israel Hayom, connected directly to the prime minister’s office, announced in Jan. 19 headlines that “our forces attacked a high-level terrorist unit in the Syrian Golan.” These are election days in Israel and anyone who links the operation in Syria to the Likud Party’s faltering campaign and the embarrassing draw that Prime Minister Benjamin Netanyahu reached in Gaza does so at his own risk.

The Israeli defense system is a healthy, democratic system that cannot be harnessed to political needs. True, it is possible to force a chief of staff to attend a political news conference; one could pull such shenanigans here and there. However, it is very difficult to engage the IDF (Israel Defense Forces) Intelligence Wing, and the Mossad, and the Shin Bet, and the General Staff in election shenanigans that could morph into an all-out war in the Middle East. Also, Chief of Staff Maj. Gen. Benny Gantz is wrapping up his term of office in the middle of next month. With one foot out the door, it is hard to imagine that Netanyahu or even Defense Minister Moshe Ya’alon (the two share the same leaky political boat) could even conceive of recruiting Gantz for a military-political escapade of this type.

In fact, an operation such as the one carried out Jan. 18 in Syria was the result of long-term intelligence efforts combined with a rare coincidence and even rarer operational opportunity that presented itself. Such an operation would be subjected to a long series of secret clearances, right down to the final clearance from the mouth of the prime minister (in consultation with the defense minister). Netanyahu is viewed as a conservative and cautious prime minister, much less daring than his predecessor Ehud Olmert. It is possible that in his subconscious the election campaign, and his lackluster position in the public-opinion surveys, influenced Netanyahu in favor of extricating the final “yes.” Yet no one to date has invented a device that measures the subconscious.

According to foreign reports, Israel has been attacking Syrian targets for quite some time. The Israeli new red line, by which Israel thwarts acts of terror and prevents “​game-changing weapons” from moving from Syrian President Bashar al-Assad’s hands to Hezbollah, is dragging the country into the Syrian civil war. But in the Middle East, everything has its price and Israel is supposed to take into consideration the cumulative, potential price of the escalation.

On the afternoon of Jan. 20, an Israeli source was quoted by the Reuters news agency as saying that the Iranian general had not been a target for elimination. This means that Israeli intelligence regarding the movement of the convoy in the Syrian Golan was good, but not excellent. Israel did not plan to eliminate a general of the Revolutionary Guards, and if it had known in advance about his presence, the operation might not have been approved. The Israeli announcement is viewed as an Israeli attempt to lower the flames, and to try to pacify Tehran.

Now, everyone waits for Hezbollah’s response, which is expected to react in Iran’s name as well. On Jan. 19, Israel deployed a battery of the Iron Dome air defense system in the north and the IDF canceled all leaves of its fighters and officers in the Golan Heights and along the border with Lebanon. Civilians were instructed to try to distance themselves from the border fence. However, this is still a far cry from a state of war.

“The Israeli evaluation,” said a high-placed security official, “is that Hezbollah cannot allow itself to open a wide front with the IDF at this point in time. It is already stretched to the limits of its capacity in Syria, it is struggling against the Islamic State and Jabhat al-Nusra in north Lebanon; it is under severe criticism within Lebanon and knows that a bloody, casualty-ridden round of fighting and destruction with Israel now may exact a price that it cannot pay. On the other hand, Hezbollah has a proven record of reprisals and a long memory. The assessment is that the retaliation will be in the Golan sector, where Hezbollah ostensibly leaves Lebanon outside the equation, or against an Israeli or Jewish target abroad.”

It took Hezbollah four years to retaliate for the elimination of Imad Mughniyeh. A total of 20 attempts were thwarted until the 2012 terror attack in Burgas, Bulgaria, in which five Israeli tourists and one Bulgarian citizen were killed. All this does not tell us anything about what to expect now. Nasrallah was humiliated in the Golan Heights on Sunday in an almost unprecedented fashion. Two days earlier he had declared, in an interview, that Hezbollah was not involved in the Golan and had no presence there. Almost while he spoke, six Hezbollah officials exploded in the heart of the Golan while they were plotting and scheming with Iranian generals.

“I suggest that the world ask itself, what were members of the Revolutionary Guards and Hezbollah doing there, only a few kilometers from the Israeli line,” a high-placed Israeli military source said. “We are not talking about an area with strategic interest to the survivability of the Syrian regime; the Golan is of negligible importance in that respect. Instead, we see a joint interest of Iran and Hezbollah to continue to weaken and tire Israel out in terror attacks via the Golan Heights.”

Maj.-Gen. (res.) Giora Eiland, a former national security adviser, told me Jan. 19 that the mistake made by Israel in its prior round of fighting was that it agreed to isolate Hezbollah from Lebanon and only fought the terrorist organization, without harming the host state. Eiland said the next time Israel will need to make it very clear that any fire or terrorist attack coming from Lebanon will constitute a declaration of war of the Lebanese government on Israel and will be dealt with accordingly. Hezbollah must know that it can no longer light the candle on both ends and that Lebanon will pay a very steep price in the next conflagration.

Major-Gen. (res.) Amos Yadlin, former head of the IDF Military Intelligence, has recently been declared candidate of the “Zionist camp” list for defense minister, should Labor Party leader Isaac Herzog assemble the next government. In a television interview on the evening of Jan. 19, Yadlin said Hezbollah was struggling with severe strategic problems, and that thus Israel is currently of relatively lower priority. Yadlin indicated that Hezbollah's most important directive was the one received from Tehran, namely to preserve Assad’s regime at any price. Thus, the organization must turn its eyes eastward to Syria, not southward to Israel, because it won't receive the required legitimacy to set Lebanon on fire.

All this tumult is taking place simultaneously with another round of talks between Iran and the world powers. The leading players in the talks are US Secretary of State John Kerry and Iranian Foreign Minister Mohammad Javad Zarif. “At some point,” said an Israeli security source, “The US will have to put the dilemma to Iran and force Iran to make a decision. If Iran wants to reach an historic agreement with the West, in which it would concede its ability to reach the nuclear threshold in the short term, it must also waive its world-reaching terror activities. The Iranians must not be allowed to continue to play their double-handed game. On the one hand, they masquerade as a stabilizing, law-and-order loving state in Geneva, while continuing to seek confrontations, and incite terror and destruction against Israel.”