With Jabhat al-Nusra controlling the southern border area of Syria and reports on cooperation between the group and Israel, the Syrian-Israeli border has become an area of concern for Hezbollah and Iran. 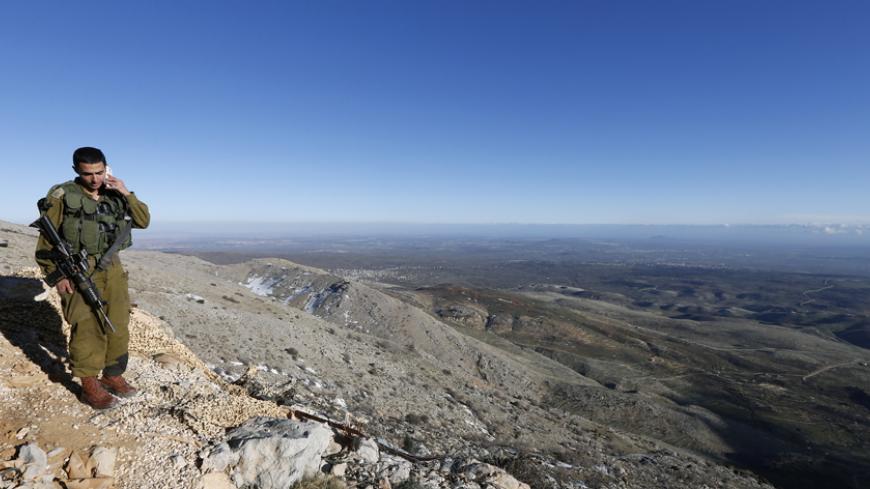 An Israeli soldier speaks on his mobile phone at a military outpost on Mount Hermon in the Golan Heights overlooking the Israel-Syria border, Feb. 4, 2015. - REUTERS/Baz Ratner

Sources have told Al-Monitor that the late January visit to Beirut by Qasem Soleimani, commander of Iran’s Quds Force, was not his first. Soleimani regularly visits Lebanon as well as Syria to hold discussions with Iran’s allies to coordinate political, military and security relations. His Jan. 27-28 visit had a personal as well as an official dimension.

Soleimani came in part to extend condolences to the Mughniyeh family for the death of Jihad Mughniyeh in a Jan. 18 Israeli attack near Quneitra. The sources said that Soleimani had had an amicable personal relationship with Imad Mughniyeh, Jihad's father and the senior Hezbollah military and security commander assassinated Feb. 12, 2008. The friendship extended to the entire family, including Jihad, who was 19 when his father was killed. After his father's death, Jihad was chosen by the family to continue his struggle, joining Hezbollah and taking on a leading role like his father.

Despite his young age, Jihad had been trained for years to assume a leading role in the Shiite group. He was considered highly qualified, given the environment in which he had been raised. His father was a legendary figure in Hezbollah's solid military organization. His uncle, Mustafa Badr al-Din, Mughniyeh's right-hand man, is thought to have assumed Mughniyeh's position after his death. The indictment issued by the Special Tribunal for Lebanon investigating the 2005 assassination of late Prime Minister Rafik Hariri identified Badr al-Din as a suspect, along with four other individuals.

This bit of family history explains the presence of Jihad, 25, in the convoy targeted by the Israelis alongside Gen. Mohammad Ali Allahdadi, confirmed by sources to have been Soleimani’s deputy for Syrian operations. Another prominent Hezbollah member, Mohammad Ahmed Issa (Abu Issa), was also among the group killed. This opens the door to questions regarding the other dimension of Soleimani’s visit and a joint Soleimani-Hezbollah convoy traveling 6 kilometers (3.7 miles) away from the Syrian-Israeli border. With Jabhat al-Nusra militants in control of the southern border area of Syria, and with media reports of cooperation between the radical Sunni group and Israel, the area has been a focus for Hezbollah and Iranian leaders concerned with the situation in Syria for more than a year. There are three primary reasons for this.

First, some strategic locations within the area controlled by Jabhat al-Nusra militants are less than 20 kilometers (roughly 12 miles) from the Beirut-Damascus highway. Any advancements or military infiltrations the militants make from Quneitra toward the north or northeast, where Ghouta is located, can lead to a shift in the military balance of power in the Syrian conflict. Such advances would allow Jabhat al-Nusra elements and other rebel groups to realize two goals: to cut off the road between Damascus and Beirut, the supply route between Hezbollah and the Syrian army, and to represent a serious threat to Damascus for the first time since the war erupted. The accomplishment of this would be highly dangerous for Hezbollah and thus cannot be taken lightly.

Second, the Israeli-Syrian border area constitutes a natural geographical extension to the southwest of the Lebanese-Israeli border area. Any gains by Sunni militant groups opposed to Hezbollah in this area would become a new front for Hezbollah in south Lebanon. It would also constitute something of a siege, as Hezbollah would be stuck between Israeli forces (on the southern border of Lebanon) and armed groups to the east (along the border with Syria). For Hezbollah, such a scenario would be unacceptable and impossible to endure. Reports alleging cooperation between Israel and Jabhat al-Nusra makes this especially troubling for the organization.

Third, the three-border area is symbolic for Hezbollah and Iran, broadening the territory for confronting Israel. Both parties have the same dream: translating Hezbollah’s experience in the south of Lebanon to the south of Syria and turning the tables on Tel Aviv. Instead of having Hezbollah besieged between two fronts, Israel would be subjected to these dual pressures, along the northern front, from the Mediterranean to the Golan Heights.

This helps explain the presence of Allahdadi in the attacked convoy. It also sheds light on Soleimani’s visit to Beirut before Hezbollah’s response to the Jan. 18 attack, namely, the Jan. 28 bombardment of an Israeli army convoy in the disputed Shebaa Farms area.