How will Hezbollah respond to Israeli strike?

Speculation has arisen as to how Hezbollah will respond following the Israeli raid on its location in Syrian territory, which led to the killing of six of its members. 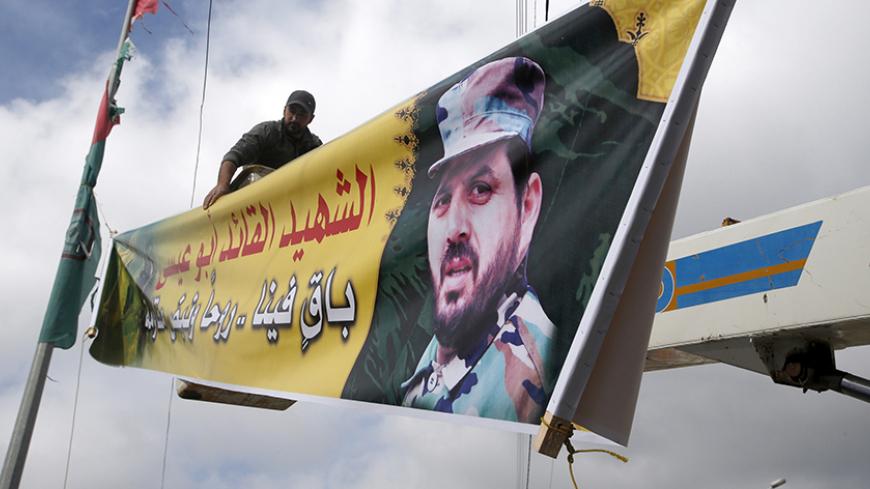 Hezbollah announced the killing of six of its fighters in a raid Jan. 18 which it accused the Israeli air force of carrying out against a group of its members on Syrian territory. The incident has preoccupied the Lebanese political scene and was expected to resound in the coming days, for more than one reason.

Hezbollah's statement on the death of its fighters in the raid comes as the first official acknowledgment by the party of its involvement in the ongoing military confrontations in the far south of Syria, specifically in the area adjacent to the Syrian border with Israel. The official statement by Hezbollah’s media relations office confirmed that its members died in the town of Mazraat al-Amal, in the Syrian region of Quneitra.

Mazraat al-Amal witnessed fierce fighting between the Syrian and Israeli armies during the 1973 October war. Yet, it remained under Syrian sovereignty after the end of the war, with the presence of United Nations forces, namely the UN Disengagement Observer Force. It is worth mentioning that during the past period, suspicions prevailed that Hezbollah — the first Shiite organization in Lebanon and the region — had expanded its military presence on the Syrian territories, from the vicinity of Damascus and Homs all the way to the Israeli-Syrian border. This was accompanied by a series of incidents in this location, part of the Syria-Lebanon-Israel triangle. On March 14, 2014, an explosive device targeted Israeli soldiers in the occupied Shebaa Farms area adjacent to the occupied Syrian Golan Heights. Another explosive device targeted Israeli soldiers in the depth of the Golan Heights area just four days after the first incident, on March 18.

The secretary-general of Hezbollah, Hassan Nasrallah, announced its party’s responsibility for the first attack within the occupied Lebanese territories, in a news interview on April 7. Moreover, on Oct. 7, Hezbollah announced that it detonated an explosive device against an Israeli tank in the Shebaa Farms area, considered by the Lebanese government as Lebanese territory occupied by Israel.

Following the latest Israeli attack, in a remarkable and unprecedented manner, Hezbollah quickly issued its statement of the names of its martyrs, while it usually did so only after several days or sometimes even refrained from mentioning its martyrs’ full names. Hezbollah’s official statement said leading member Mohammed Ahmed Issa was among the victims. But what was most striking — at least in the media — is that the victims’ names included Jihad Imad Mughniyeh “Jawad,” son of Hezbollah’s slain military leader Imad Mughniyeh, known as Hajj Radwan. The latter was a legendary Hezbollah fighter for more than two decades and was always a target by Israel and some Western security services, until his assassination by a booby-trapped car in the Syrian capital, Damascus, on Feb. 12, 2008.

Hence, questions have been raised in Beirut about the possible repercussions of this Israeli raid and Hezbollah’s reaction to it. Concerns have also been voiced about the likelihood of retaliation by Hezbollah, or of military tension or escalation at the Lebanese-Israeli front. However, Hezbollah’s performance in recent years ruled out any development of this kind, since it was likely that the party would seek to keep its reaction outside the scope of the Lebanese territories, especially since the Israeli raid that targeted the fighters was carried out outside these territories.

Moreover, Hezbollah will not give an immediate reaction; it will take its time and announce that it reserves the right to respond to the Israeli enemy by avenging the death of its martyrs at the time and in the place it deems suitable.

Furthermore, in light of past experience between the two sides, Hezbollah will probably not resort to direct military means to respond to this attack. It will refrain from military escalation at the southern front or from any shelling operations. Hezbollah will rather opt for security maneuvers, such as hitting qualitative targets that it believes are commensurate with the loss it sustained.

Nevertheless, a new factor was added Jan. 18 to the complex issues already present on the Lebanese arena.