Iran warned US of 'consequences' for killing general

Iran's deputy foreign minister has said that Iran told the United States that there will be "consequences" for Israel over the Jan. 18 killing of an Iranian general. 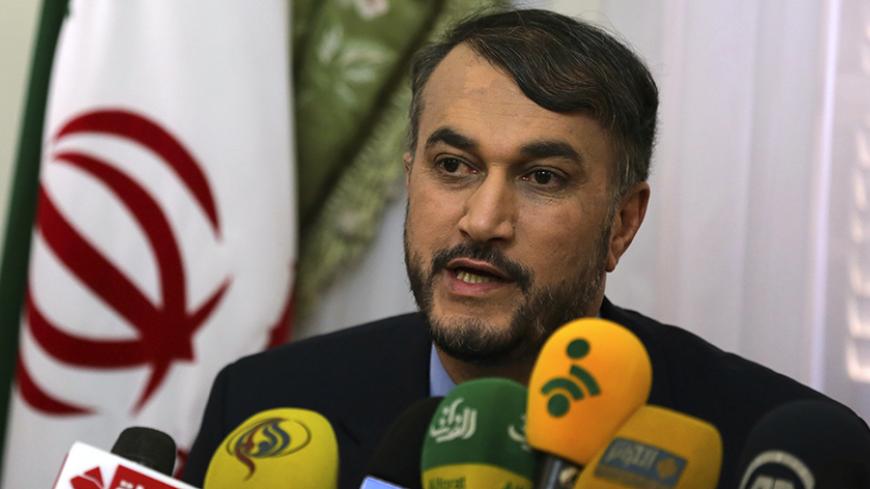 Hossein Amir-Abdollahian, Iran's envoy to the Organization of Islamic Cooperation, speaks during a news conference about political relations between Iran and Egypt after the election of Egyptian President Abdel Fattah al-Sisi, at the Iranian embassy in Cairo, June 9, 2014. - REUTERS/Mohamed Abd El Ghany

Deputy Foreign Minister for Arab and African Affairs Hossein Amir Abdoollahian has said that Iranian officials sent the United States a message about the killing of an Iranian general by Israel.

At a ceremony in honor of Gen. Mohammad Ali Allahdadi, who was killed along with six Hezbollah fighters in the Golan Heights city of Quneitra Jan. 18, Abdollahian said, “In this message, we told the Americans that the Zionist regime crossed Iran’s red lines with this act.”

He added that the message, sent through “diplomatic channels,” warned that “Zionist officials should await the consequences of their actions.”

Speaking to reporters at the ceremony, the head of the Islamic Revolutionary Guard Corps, Mohammad Ali Jaffari, said, “By the grace of God, just as Imam Khomeini had promised, the liberation of Quds is near.” He continued, “The occupying regime of Quds knows they are on their last legs and know themselves that it’s over.” When asked by reporters why Israel would choose this moment to kill an Iranian general in Syria, Jaffari said, “They have a long history of these actions,” adding that the Israelis “fear” the school of thought of former Supreme Leader Ayatollah Ruhollah Khomeini.

An unnamed “senior security source” in Israel told Reuters that Israel was unaware that an Iranian general was in the car, while a Lebanese newspaper speculated that the general was targeted because he had forgotten to turn off his cell phone.

At the ceremony, Safavi told reporters that Iran suspects an “alliance” between Israel and Jabhat al-Nusra because of reports that wounded Jabhat al-Nusra fighters have been treated inside Israel. He claimed that “helicopters of the Zionist regime martyr our dear ones with the information they acquire from inside Syria and Jabhat al-Nusra” in cooperation he called “reckless and idiotic.” Iranian sources have claimed that an Israeli helicopter was behind the Jan. 18 attack on the convoy.

Jabhat al-Nusra is one of the strongest forces in the Golan Heights and controls the border on the Syrian side. Israel has admitted to treating wounded individuals, but claims that it does so on humanitarian grounds “irrespective of identity.”

Iran holds that Allahdadi had been in Syria as an adviser. Safavi said, “Iran does not hide that it helps as advisers to [Syrian President] Bashar al-Assad and [Iraqi Prime Minister] Haider al-Abadi in order to establish security in Iraq and Syria.”