Could Arqoub be the next Arsal?

The large number of displaced Syrians in the Arqoub area has raised concerns about the potential for instability in southern Lebanon instigated by jihadists living among the refugees. 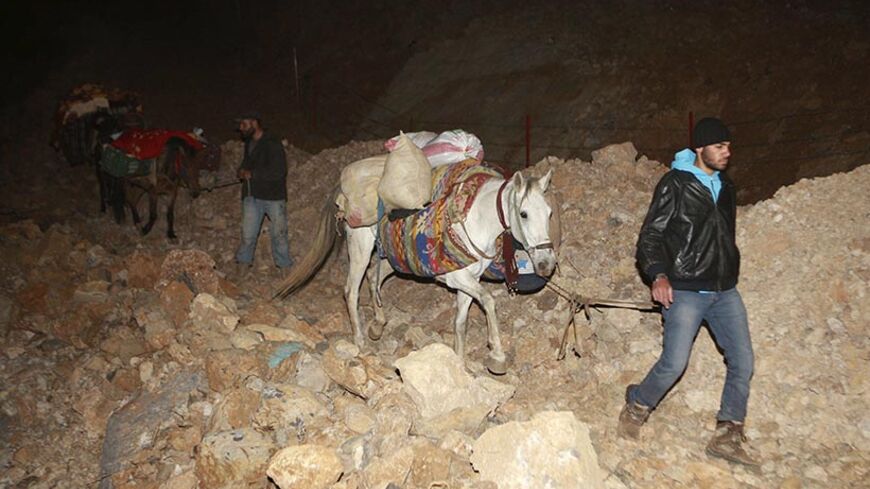 Syrians, who fled the fighting in their country, arrive with their belongings at night in the Shebaa region, southern Lebanon, Nov. 11, 2013. - REUTERS/Karamallah Daher

Lebanese security forces have their eyes on the south, in particular on Arqoub, a region on the Lebanese-Syrian border that includes the villages of Shebaa, Kfar Shuba, Hebarieh, Kfar Hamam and Rashaya al-Foukhar. The area is demographically and geographically distinct. It has a Sunni Muslim majority, but also includes several Shiite villages (among them Khiyam), Christian areas (including Rashaya al-Foukhar, Marjeyoun, Klayaa and Burj al-Moulouk) as well as Druze settlements (for example, Almari, Hasbaya and Fraidiss). The Golan Heights run along the Syrian side of the border adjacent to the region.

The biggest town in Arqoub is Shebaa, along the Lebanese-Syrian-Israeli border. Lebanon considers Shebaa Farms to still be occupied by Israel, but the United Nations holds that Shebaa Farms is Syrian territory. Kfar Shuba is also disputed territory.

Just like other regions of Lebanon, Arqoub changed demographically with the arrival of large numbers of displaced Syrians, mainly in Kfar Shuba, Shebaa and Hebarieh. Shebaa alone accommodates more than 7,000 displaced persons, who outnumber the town's 5,000 or so residents. Most of the refugees fled from Beit Jann and Mazraat Beit Jann, in the eastern countryside of Damascus, during raging battles along an axis between the Syrian army and opposition militants.

The refugees live in houses they rent with the help of monthly allowances from the United Nations and in a building overseen by the Islamic Group, which has a strong presence in the area. They also receive food and medicine from the UN in addition to other donations. Camps sheltering some 5,000 additional displaced people have been set up, scattered around the outskirts of Ibl al-Saqi, Khiyam and Hebarieh.

Given these circumstances, security sources knowledgeable of the region believe the Arqoub villages currently face a security threat from within and fear possible instability along the Lebanese-Israeli border. In light of the number of refugees in Arqoub, and in the wake of the August battle in Arsal between the Lebanese army and members of Jabhat al-Nusra and the Islamic State (IS), most of them from the Syrian refugee camps in the town, concern has grown that similar incidents might occur in the south. According to security sources, information has been circulating that Jabhat al-Nusra members have settled in Arqoub and that wounded Syrian rebels have moved to Shebaa after being treated in Israeli hospitals.

Concerns are growing because of a series of security incidents that have disrupted the peace in the region. This year, tensions escalated in Shebaa and surrounding Druze villages between anti-regime Syrian gunmen from Beit Jann and pro-regime gunmen from the majority Druze village of Hadar. The region's parties and religious figures sought to contain the situation and stop it from spreading to Arqoub, Hasbaya and Rashaya and avoid sectarian strife in the area. On a few occasions, these incidents had the potential to result in extended conflict, had they not been quickly brought under control.

Other tensions stem from displaced persons being accused of assaulting Shebaa inhabitants, and an increase in thefts. The occasional distribution of anonymous statements also fueled strife between Sunnis and Druze. One of the most dangerous incidents occurred last year, with the shooting and killing of a Druze sheikh in Hasbaya in March. Before that, a clash erupted between the Druze village of Almari and the majority Sunni Ain Arab in April 2012. These events triggered the intervention of the region’s prominent political figures to calm the area.

Parliamentary sources from the south indicated that a state of emergency was declared in Shebaa after the Arsal battle in August, following several meetings by local leaders. These meetings also resulted in a decision made that same month to stop accepting refugees and to ask residents to report any suspicious activity.

In March, the government had deployed additional soldiers to Arqoub and Marjeyoun villages, and the army increased operations to locate militants infiltrating to and from Syria through Jabal al-Sheikh. It also enhanced its surveillance points and added fixed and mobile checkpoints. On May 2, security forces arrested a four-member Lebanese-Syrian gang smuggling weapons between Syria and Lebanon through Arqoub and Jabal al-Sheikh en route to Beit Jann.

IS and Jabhat al-Nusra have tried to gain control of Arsal and other places to establish an emirate that would stretch to Tripoli, some 70 kilometers (44 miles) northeast of Arsal. According to security sources, such a project would not work in the south in the Arqoub villages, because efforts to expand there would lead to conflict with Shiite villages, that is, Hezbollah strongholds. The bigger threat to Arqoub therefore, the sources believe, are operations by extremists among the displaced to create instability along the Israeli-Lebanese border. Such actions would constitute a breach of UN Resolution 1701 (2006), which ended the war between Hezbollah and Israel. The Arqoub villages are located in the region south of the Litani River, where according to the resolution, no fighters, equipment or weapons except those of UNIFIL (the United Nations Interim Force in Lebanon) and "legal forces" (meaning the Lebanese army) are allowed.

The sources wondered: What would happen if these groups shot at Israel from Lebanese territory? Could an escalation lead to a new war between Lebanon and Israel? The sources said the international community must be made aware of the danger of the situation and seek to enforce the resolution. In the context of instability, they mentioned the missile launches from Lebanese territory at Israel, the most recent occurring in Almari, near Arqoub, in July. Israel responded by shelling the Shebaa Farms and Kfar Shuba area.

The sources also wondered what would stop IS and Jabhat al-Nusra from kidnapping members of the UNIFIL and holding them hostage. They have already undertaken such operations on the Golan Heights, surrounding Fijian and Filipino soldiers from the United Nations Disengagement Observer Force. On Aug. 28, the jihadists abducted 43 Fijian soldiers near Quneitra, while Filipino soldiers were surrounded on Aug. 30. The latter managed to escape, but Jabhat al-Nusra is still holding the Fijians captive.

The above concerns will be relevant as long as the issue of displaced Syrians extends beyond humanitarian concerns, threatening to turn Lebanon into a base of operations for armed groups to act in the country and in Syria. The events in Arsal that led to refugees taking part in confrontations with the Lebanese army are reason for concern about Arqoub.