For the first time in the 23-month-old Syrian civil war, Jabhat al-Nusra and Hezbollah have been involved in direct confrontations, writes Jean Aziz. 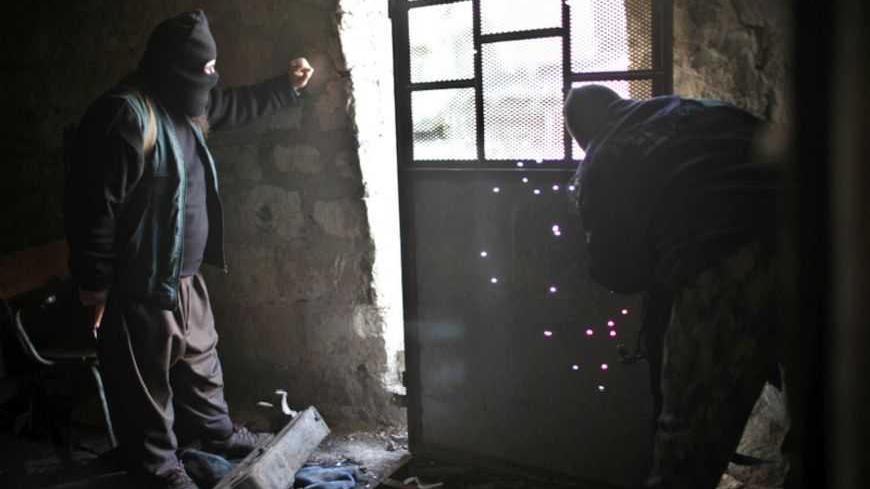 While the Iraq-Syria border was witnessing the first armed confrontation pitting Sunni jihadists against Iraqi and Syrian soldiers, leaving scores of people dead, a wide stretch of border between Lebanon and Syria was the scene of direct and unprecedented contact between Shiite Hezbollah militants and Sunni jihadists belonging to Jabhat al-Nusra. This new and serious development is likely to have serious repercussions in the coming weeks. There are several theories about how this situation came to pass.

One week prior, amid sporadic clashes on both sides of the northeastern border of Lebanon and Syria, regular Syrian army forces had redeployed in al-Nabk, near ​​the Lebanese border. Official Lebanese sources confirmed the event. On first glance, the redeployment would appear to be unremarkable given the movement of Syrian army units since the beginning of the civil war almost two years ago, but upon closer inspection, the seriousness of the maneuver becomes apparent.

The al-Nabk area stretches more than 45 kilometers along the border region. It starts to the west at the Jabal Akrum area of Akkar, north of Lebanon, and extends to ​​Arsal, in the Bekaa to the east, along a strip of rugged mountainous land where the Lebanese state — including administrative authorities as well as security forces — has not had a presence for decades. What is more important about this strip from which the Syrian army withdrew is that it is now almost completely controlled by the jihadists of Jabhat al-Nusra, the Syrian offshoot of al-Qaeda and rebel fighting force. In addition, the adjacent Lebanese territory is inhabited by an overwhelmingly Shiite population, which points to Hezbollah having a dominant presence there.

Thus, after nearly two years of recurring tensions and sporadic clashes between conflicting  and volatile components on both sides of the border, Shiite Hezbollah and Sunni Jabhat al-Nusra today stand face to face along a significant length of the Lebanese-Syrian border in the absence of a restrictive or deterrent force in the form of the Lebanese or Syrian state. Remarkably, this development resulted from a sudden redeployment by the Syrian army.

The army still has an effective presence west of al-Nabk, whose inhabitants are, demographically speaking, predominantly Sunni, rather than Shiite, Lebanese. It responds almost daily to incidents of infiltration by fundamentalist Sunni insurgents from Lebanon. The situation is similar further to the east in the central Bekaa, where the regular Syrian army is still deployed in the face of a Sunni Lebanese demographic, no more than 30 kilometers from the center Damascus. In short, the Syrian army remains deployed in areas adjacent to Sunni regions, but has strategically withdrawn from Lebanese Shiite villages, paving the way for Jabhat al-Nusra to fill the vacuum, putting it in direct conflict with Hezbollah members.

The new situation triggered contrasting responses in Beirut. Supporters of the Syrian opposition were quick to accuse the Syrian regime of having hatched a “conspiracy” to further fuel tensions over Syria. They believe the army's movement was an attempt by Damascus regime to illustrate that its collapse would cause mayhem in the region. Moreover, the government of Bashar al-Assad regime is trying, allegedly, to lure its Lebanese Shiite ally, Hezbollah, into fully engaging in the Syrian crisis in an attempt to perhaps have Iran and maybe Iraq follow suit. Thus, the Syrian conflict would be transformed into a regional issue, the resolution of which would necessitate more than bilateral negotiations between the regime and the opposition.

Meanwhile, Lebanese friends of the Syrian regime are peddling a different story. They believe that for the past few weeks the armed Syrian opposition had been pressuring the the Syrian army in al-Nabk, leading it to withdraw. They add that the armed opposition had taken advantage of the fact that the Syrian regime had regained control of the Aleppo-Hama road by anticipating that it would loosen its grip on the Shiite area. Moreover, the opposition had also allegedly taken advantage of the regime’s pressure points in the city of Raqqa and south of Damascus, forcing the army to withdraw from Shiite villages so that Jabhat al-Nusra would come face to face with Hezbollah.

The Lebanese Shiite group will ostensibly provide Jabhat al-Nusra with a viable excuse for upping its sectarian rhetoric. Hezbollah’s engagement would put pressure on the West, which is keen to preserve Lebanon’s stability. Most important, however, should Hezbollah step into the Syrian conflict, the issue of its arms would become part of the Syrian crisis and any potential settlement. This is a common goal of the Lebanese opposition and the Syrian armed opposition as well as the Arab and other regional states supporting them.

The pertinent question, however, is what would the consequences be of a direct confrontation between the jihadists and Hezbollah? Military experts agree that both sides will keep checking the pulse and carefully monitor the situation before launching an attack. A few sporadic skirmishes might erupt between the parties throughout the mountainous strip for a few weeks, until the snow melts in the area. Afterwards, a new war might erupt involving Sunnis, Shiites and Alawites, as was the case of the armed ambush that took place in Iraq in Anbar province. The Syrian crisis is likely to spill over into Iraq.

A confrontation between Jabhat al-Nusra and Hezbollah certainly has strategic value in the ongoing conflict. Jabhat al-Nusra could pressure Damascus and Zabadani through the Lebanese region of Arsal. Moreover, the Sunni jihadists could also put military pressure on the Syrian Alawite and Christian coast in the west. Such dangerous developments on the battlefield would exacerbate the crisis in Lebanon and in Syria and worsen relations between the two countries.

Jean Aziz is a contributing writer for Al-Monitor’s Lebanon Pulse, a columnist at Al-Akhbar (Lebanese), and host of a weekly political talk show on OTV.