What does the fall of Yabrud mean for Lebanon?

After the Syrian regime regained control of the rebel-held town of Yabrud this past weekend, some in Lebanon fear that the influx of extremist militants means more terrorist attacks inside the country. 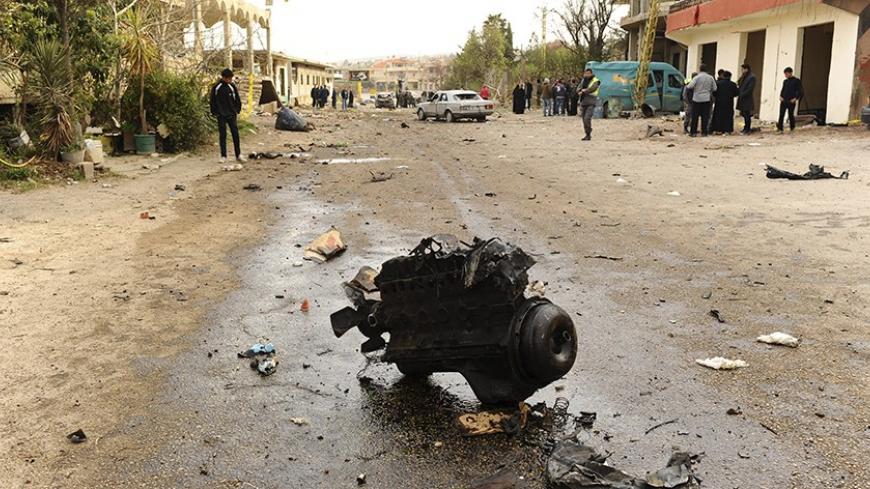 A piece of wreckage from a vehicle is seen at the site of an explosion in the Bekaa Valley in Lebanon, March 17, 2014. At least three people were killed in an apparent response to the fall of a rebel-held town to government forces in Yabrud, Syria. - REUTERS/Hassan Abdallah

What had been likely — and something Al-Monitor had referenced multiple times — finally happened. The town of Yabrud fell into the hands of the Syrian regime army, and with its fall a large number of militants from the factions fighting President Bashar al-Assad fled into adjacent Lebanese territory to the west. Most of them went to the Lebanese town of Arsal. All eyes have turned toward this region in light of a question many were asking: When will the great battle break out there? And what will be its price militarily and, especially, politically?

Based on the on-the-ground details, it became known on Saturday night/Sunday morning (March 15-16) that the Syrian army had tightened its control over the town of Yabrud, putting an end to the last armed opposition presence in the Qalamoun region. The latter is a large region that stretches from northern Damascus to the west of the city. This also secured the route linking the Syrian capital to the northwest, passing through Homs and reaching up to the Syrian coast. Analyses and predictions quickly emerged regarding the consequences of this battle on the situation in Syria politically and militarily, and particularly in terms of its impact on the fate of Syria and the regime. Yet, in contrast, the Lebanese are concerned with the expected consequences of this battle on their internal arena, from the Bekaa Valley, which is adjacent to Syria, stretching to the Lebanese capital, Beirut.

As many media outlets have reported, the fall of the last rebel stronghold in the Qalamoun region has led to hundreds — and some say thousands — of militants fleeing to the adjacent Lebanese region of Arsal. This will be confirmed in the coming hours and it's possible that the number will rise, especially if the Syrian army continues to move toward the border with Lebanon to gain control of the last small villages between Yabrud and the border — such as Ras al-Maara, Al-Musharafa and Falita. These are the places that are likely to have turned into havens for the last militants escaping from Yabrud. If the army does reach the border, then the rest of the militants could cross over into Lebanon, making the estimates in the thousands very logical.

However, the most important aspect of this map is that these militants are entering the Lebanese Arsal region. Arsal is a town that — for more than two years — has been in the line of fire and a point of worry. This came as a result of the events in Syria on the one hand, and of the overlapping borders between Lebanon and Syria and the absence of any security or military control in this rugged and barren mountainous region, on the other. However, the most important reason for the tension in the area is that Arsal — as a Sunni majority town — did not hide its support for Assad's opponents. Moreover, Arsal is located between two Shiite regions — Baalbek to the south and Hermel to the north — the majority of whose residents are Shiites who support Assad.

Thus, a new explosive factor — namely hundreds of militants, most of whom belong to fundamentalist organizations — has been added to this already fragile demographic and geographic scene. This will make the region a hot spot that is on the verge of exploding, or perhaps place it under the microscope for quick treatment — domestically, regionally and internationally. In this context, it is likely that the interests of various parties will intersect and they will all agree on the need to resolve the situation in Arsal, to prevent it from becoming a center of terrorism plaguing Lebanon.

At the international level, it will be the West — from the United States to Europe — which is concerned with and interested in ending the abnormal situation in Arsal. First, this is due to the West's concerns about the mere possibility of the existence of fundamentalists or terrorists in the town. And second, out of fear for the UN forces in southern Lebanon, where the French, Italians and Spanish have military forces deployed as part of UNIFIL. It is worth noting that in recent years these forces have been subject to multiple terrorist attacks carried out by extremists against their members. Finally, the West also fears that these militants may infiltrate the border with Israel and carry out attacks there. There appears to have been an early warning in this regard, after the Islamic State of Iraq and al-Sham (ISIS) claimed responsibility for an explosive device that targeted Israeli soldiers near the Lebanese border in northern Israel on March 14.

At the regional level, the same calculations will intersect for multiple parties in the need to resolve the security situation in Arsal. The Syrians will be keen to eradicate the fleeing militants and prevent them from returning to Syria. The Saudis will have similar interests, especially after the Saudi royal decree issued on Feb. 3 to hold any of the kingdom's citizens who fight in Syria criminally accountable. Moreover, Riyadh announced early this month that it had classified a number of organizations — including ISIS and Jabhat al-Nusra — as terrorist groups. These interests will be further reinforced following the outbreak of the crisis between Saudi and Qatar, noting that Riyadh has long considered that Doha was funding these organizations.

And finally there is the Lebanese domestic level, where there is expected to be a similar intersection of interests. Hezbollah is the party with the primary interest in eliminating or expelling these militants, due to the extreme hostility between the two sides and given the risk that the latter may carry out more explosions and suicide bombings similar to recent ones that targeted areas where Hezbollah has a presence. Meanwhile, the team of former Prime Minister Saad Hariri will also likely support striking these militants. First, because it is in line with the position of Saudi Arabia, which Hariri's group has always identified with. And second, to prevent the Sunni scene in Lebanon from drifting toward extremism, which would cause it to lose its political base, which relies on Sunni moderation.

The question remains: Who can possibly fulfill such a mission? Hezbollah? Or the Lebanese army? Or perhaps some other formula similar to that which ended the fundamentalist group led by Ahmad al-Assir near Sidon in June? This is a question we will try to answer in the next report.