Syria’s victory in Yabrud may be game changer

At least for now, the recapture of Yabrud by Syrian government forces appears to have tilted the military and political balance in favor of Syrian President Bashar al-Assad. 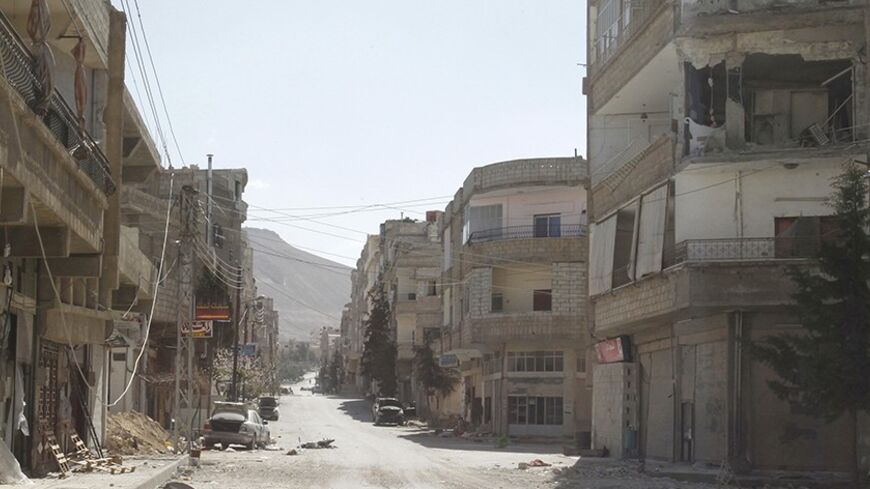 Damage is seen on a street in Yabrud after soldiers loyal to President Bashar al-Assad took control, March 20, 2014. - REUTERS/Khaled al-Hariri

How will the fall of Yabrud into the hands of the regime reflect on the course of events in Syria? This is a question raised by all of the concerned parties and observers of the conflict in Syria, where the unrest has been ongoing for three years now. The army’s control of the most important stronghold of its opponents in the region northwest of the capital is bound to have repercussions on the ground, as well as political repercussions on the discussion tables aimed at finding solutions to the crisis.

First, at the military level, any observer of the violent path of the armed conflict can anticipate the series of steps lying in store. The fall of Yabrud is bound to lead to several changes in the balance of power in the geographic scope surrounding what is considered to be the capital of the Syrian Qalamoun region.

The Syrian army’s control over the town opens two lines for the army. The first line heads south, as the regime is expected to complete its control of the last small villages stretching from Yabrud to the south and to the southwest, subsequently to dominate the towns of Rankous and Flita, and then go straight to the south to isolate the besieged town of Zabadani, west of Damascus and close to the Baalbek region of Lebanon. By taking control of Zabadani, the Syrian army will have tightened its grip on the entire border line between Lebanon and Syria. This makes its communication lines that stretch from Damascus to the borders of the Golan Heights, occupied by Israel, safe and complete.

This step will have results that Tel Aviv has no choice but to take into consideration. From Israel's standpoint, this opens roads to Hezbollah’s movement from the Lebanese Bekaa Valley to the occupied Golan Heights through Syrian territory that is entirely controlled by the Syrian regime.

It may not be a coincidence that the first days that followed the fall of Yabrud witnessed the explosion of a bomb on March 18 targeting the Israeli army in the Golan Heights. Israel directly accused Hezbollah and responded by a military escalation through Israeli shelling of sites adjacent to the Syrian Golan Heights, in a clear field message.

The second military line opened by the fall of Yabrud extends from the latter to the northeast, and then turns toward the east. The Syrian army is also expected to seek the control of the Douma region, which is the eastern gate of Gouta, i.e., the eastern and northeastern suburb of Damascus. Thus, the Syrian capital becomes fully immune to the militants' fire. More importantly, such a field development will practically lead the regime to clean the border region with Jordan so that the Daraa region — where the Syrian events started on March 18, 2011 — could become completely encircled by the regime’s forces.

Should these expectations materialize, the Syrian army may seek later to clean up the last enclaves of armed opponents between Damascus and the Syrian coast in the north and northwest. Moreover, there are serious discussions that have started at this level about a willingness to resolve the Qalaat al-Hosn battle, west of Homs, near the southwestern Syrian border with Lebanon. As a result, the regime will be able to devote itself to the Aleppo battle, which is expected to be a major battle in the next phase.

These field developments are to be associated with similar developments in political positions and in the approaches adopted by both parties of the conflict in Syria, regarding the negotiations process begun with the Geneva I and II conferences.

That Syrian President Bashar al-Assad has made these field achievements on the ground will likely make him more rigid in dealing with the issue of a peaceful solution. Thus, it would be hard for Assad to accept to turn Geneva II or III into a diplomatic maneuver to compensate his political opponents for their military losses.

Moreover, the opponents will find themselves in a difficult situation, in terms of accepting to return to the negotiating table, in light of the military balance that is tipped in favor of their adversaries. Thus, the first result would be the postponement of the next round of the Geneva II talks to an undetermined date, which would be likely to drag on for months or more. During this period, the regime would have a tight grip on the heart of Syria, its basic geographical lines and the areas of population density. Remote areas in Raqqa, Qamishli and the Jazeera region will be left for the armed opposition and its internal struggles between the fundamentalist groups there, or the conflict with the Syrian Kurds in some of these areas.

It should be noted that these preliminary indications of the new military balance have already started. In this context, one can clearly read the step that was taken by the Syrian parliament on March 17, regarding the amendments made to the mechanism of electing the next Syrian president. Pursuant to these amendments, the opposition dissidents or their potential candidates will be excluded from the elections.

Therefore, one of the first political consequences of the fall of Yabrud is that Assad is likely to toss his hat in the ring early this summer, and the results of these elections would be already known.

After this, nothing will prevent this new field situation from persisting for years, during which Assad will be the ruler of the majority of Syria. The other regions that are under the thumb of extremist factions will be subject to the worst forms of chaos and tension. Some opposition members warn against the collapse of the geographical unity of Syria in case the situation remains as is for long. Those who are pro-regime, however, believe that this is only temporary. When the Western countries and the regional powers backing extremist groups realize the dangers this situation imposes on Syria and neighboring countries, they will reach a point where they will indirectly turn a blind eye to the practices of Assad, or perhaps ask Assad directly to settle the situation in the rebel areas and restore control over Syria as a whole.

The readings of the Yabrud battle’s outcome can be seen with an optimistic or pessimistic eye depending on the observer. However, the results can be reflected as such: Either the third round of the Geneva II conference will be postponed, or Syria as a united entity will cease to be for a very long time.