The Syrian army, assisted by Hezbollah, is making gains in the city of Zabadani against opposition fighters, who have barricaded themselves in the old town. 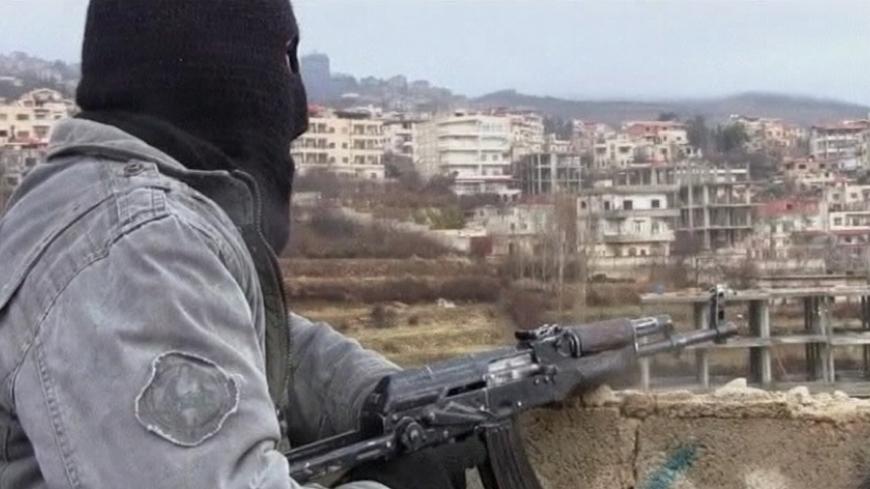 A member of the Free Syrian Army with an assault rifle stands guard during a patrol in the western border town of Zabadani in this undated still image taken from amateur video obtained by Reuters, Jan. 16, 2012. - REUTERS/Amateur video
Mustafa al-Haj
July 21, 2015

DAMASCUS, Syria — The military operation in Zabadani launched by the Syrian regime and supported by Hezbollah continues into its second week. Zabadani lies in the northwest of Rif Dimashq governorate, near the Lebanese border and the road between Damascus and Beirut.

The operation began on July 3 with the objective of regaining control of the city that had fallen to opposition forces in January 2012. On July 15, hundreds of planes flew over the city and dropped 470 barrel bombs.

The city of Zabadani is surrounded by mountain ranges on the east and west, and its main road cuts through the center of the city. The armed opposition — represented mainly by the Hamza Brigades, affiliated with Jaish al-Islam and Ahrar al-Sham — now control only parts of the city. The opposition’s influence is mainly concentrated in Zabadani’s old quarter and some of the surrounding neighborhoods.

The battle has been ongoing for two weeks now, and has helped the regime forces tighten the noose on the fighters of Jaish al-Islam and Ahrar al-Sham, even though they have managed to maintain their positions inside the old town.

On July 14, the Syrian army took control of the Sultani neighborhood in southeast Zabadani, as well as the Kahraba roundabout and al-Hakl al-Asfar Street. With this progress, the Syrian army tightened its grip on the main entrance of Zabadani and cut the road between the city and Madaya. This road is used by opposition fighters to travel north of Zabadani toward the Qalamoun Mountains, and its blocking increased pressure on the opposition.

Retired Brig. Gen. Moatasem Jabali told Al-Monitor, “The Syrian army and Hezbollah’s inability to enter the old town is due to several reasons. The first is the geography of the area, which is mountainous and helps opposition fighters show a great deal of defense. The second reason is that almost all fighters were residents of the same area and they know all the roads of the city and its strategic points, which gives them an advantage in the battle. The third reason is the geographic extension of the city of Zabadani toward Madaya and Serghaya and toward Rankous and the Flita Mountains [used by the opposition as supply lines]. The fourth reason is the single command for the rebels in this area, which enabled them to concentrate efforts and gave them great freedom to maneuver.”

Jabali also pointed out that Hezbollah was forced to change the fighting strategy it applied in the area surrounding Qalamoun by using long-range missiles, which are making a big difference.

Militants are fortifying themselves in the old town, and Hezbollah won’t be satisfied with just controlling some hills, as was the case in Qalamoun, to declare victory. Therefore, the party started destroying and successively entering the neighborhoods of the old town, according to Jabali.

Parallel to the escalation of the military operations against Zabadani, the Wadi Barada Shura Council announced July 5 that it was completely cutting off the water supply from the Barada River to Damascus as of July 6, in solidarity with Zabadani, until the shelling stops.

The battles have been escalating since July 14, when official military sources stated, “The engineering units in the Syrian army managed to bomb a tunnel used by Zabadani’s opposition fighters in Tal’et al-Wazir, south of Zabadani. The tunnel connected the southern Basateen village, controlled by militants, to Boukein area, southeast of Zabadani, and it was dug under the Zabadani-Madaya highway.”

On July 15, the official paper al-Baath quoted a military source in the Syrian army as saying, “Army units, in cooperation with the Lebanese resistance, are continuing their operations against the terrorist organizations in Zabadani. They managed to destroy a terrorist nest that included weapons and ammunition in Zabadani Valley.”

On July 20, Syria’s state news agency SANA revealed, “Army and resistance units made quick progress in the past 48 hours, succeeding in gaining total control over Boukein Hill and Darb al-Sham, which is considered the main line used by opposition fighters from Zabadani to Barada in the south. In parallel, the [army units] also managed to expand their control in Zabadani Valley, while [the opposition] incurred heavy material and human losses.”

According to the Syrian Observatory for Human Rights, the clashes between the regime forces, Hezbollah and forces loyal to them on one side, and local Islamic armed factions on the other, continue in Zabadani and its environs, while the regime forces are advancing and have gained control over Boukein Hill and Darb al-Sham. No information has been released yet about the human losses. The clashes were accompanied by constant shelling by the regime forces in the Zabadani area, and 26 airstrikes have been conducted by the regime’s air force against Zabadani as of July 20, according to the observatory.

Regarding the latest developments in the Zabadani battle, pro-regime military analyst Karim Saqr told Al-Monitor, “We can say that we are now in the fourth stage of the operation to liberate Zabadani. The first stage consisted of putting Zabadani under siege, and the second stage aimed to paralyze the terrorists’ firing capacities. The army succeeded by targeting the terrorists’ fortresses. The third stage involved raiding the fortified region in Zabadani. The army took over several strategic locations on the highway separating the old town and the city and overlooking the old town from the south and east. The current stage consists of tightening the noose.”

Saqr added that if the operation continues as planned, Zabadani will be completely liberated in the coming days from Jabhat al-Nusra terrorists. It would be the first city in Rif Dimashq seized by terrorists to be regained by the regime.

Asked about the humanitarian situation in the city, opposition civil activist Mohsen Burhan, who lives in Zabadani, told Al-Monitor, “Many families were displaced from the areas of conflict toward the Inshaat and al-Shalah areas that are under the army’s control. These are considered a relatively calm region spared from missiles and barrel bombs, as the Syrian army is deployed in it. The remaining civilians in areas of conflict are suffering from a lack of food supplies, especially children. The intense shelling has prevented them from leaving their hideouts for fear of death."

He added, “The opposition militants lost their popular base in Zabadani, where inhabitants consider them the reason behind the army’s shelling of their houses. The people want the war to be over to return to their houses and lands, which were burned by the regime forces.”

Burhan noted that negotiations are ongoing between the opposition fighters and the Syrian army, brokered by prominent figures in the city and national reconciliation committees to stop the military operation. He said, however, that the negotiations are still secretive and vague.