Syrian army closes in on Douma after Adra victory

Syrian regime forces have scored an important victory by securing the strategic town of Adra in the Damascus countryside, increasing pressure on rebel strongholds in eastern Ghouta. 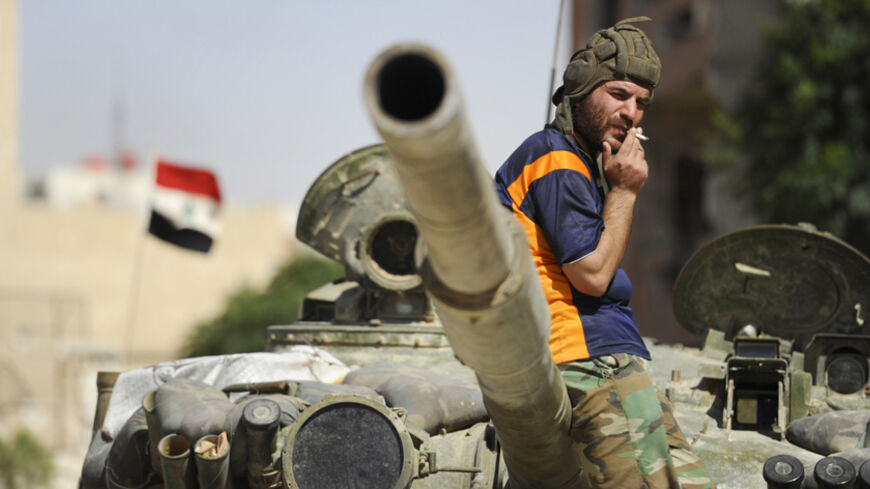 A soldier loyal to Syria's President Bashar al-Assad smokes while resting on a tank in Adra al-Omalia, after taking control of the area from rebel fighters Sept. 25, 2014. - REUTERS/Omar Sanadiki
Mustafa al-Haj
October 6, 2014

DAMASCUS, Syria — The news that Jaish al-Islam has withdrawn from the town of Adra al-Omalia, northeast of Damascus, came as a surprise Sept. 25. It was similar to when the force had taken control of the town overnight a year and nine months earlier. The withdrawal comes after rebel fighters took control last month of the neighborhood of al-Dukhanniya in eastern Ghouta.

With Jaish al-Islam’s loss of Adra, the Syrian army was able to restore part of the Qalamoun hills and the mountain of Ghouta.

Adra is about 25 km (15.5 miles) northeast of Damascus. It belongs to the district of Douma and is divided into three main parts: Adra al-Omalia, the town of Adra and the industrial area. It is neighbored by al-Dumayr to the east and the towns of Qalamoun to the north. Its strategic importance stems from its location at the axis of Jobar-Harasta-Douma to the northeast of Damascus. Adra is an outlet for the rebel forces toward Douma, which is home to the largest concentration of opposition fighters in eastern Ghouta. Adra is located on the main Damascus-Homs road and is considered a gateway to Damascus in the north and the Qalamoun towns to the west.

The withdrawal of Jaish al-Islam came in two phases. The first was on Sept. 25, when it withdrew from Adra al-Omalia to the east toward the town of Adra, which lies only a few hundred meters away. In the second phase, Jaish al-Islam’s command announced in a statement that it had decided “to withdraw to the town of Adra after it achieved its goals of exhausting the regime’s army and distracting its attention from other sites that have been liberated," adding, "The fighters who have withdrawn did not return to their bases, but moved to fight in other jihad battlefields.”

However, Jaish al-Islam seems to have lost another spot that it was trying to turn into a bulwark against the army’s progress toward Douma, 10 km (6 miles) northeast of Damascus. A few days later, however, the Syrian army announced its progress toward the town of Adra, its full control over the town and its progress to its depth westward on Sept. 28 in an operation that clearly targeted Douma.

According to SANA, “The storming of Adra falls in the framework of the military operation carried out by the Syrian army in East Ghouta in Rif Dimashq and constitutes a decisive blow to the terrorist project and its supporters. It has also increased the state of confusion in the ranks of jihadist forces and led to their defeat and to the rapid deterioration of their morale. The storming of Adra has also tightened the noose around the neck of those who remained in East Ghouta. Adra has become a site to monitor the implementation of the planned operations, particularly in the city of Douma, which came under the Syrian army’s crossfire after the latter controlled the area of ​​Tall al-Kurdi, southwest of Adra.”

Commenting on the full withdrawal of Jaish al-Islam from Adra, Mohsen Jabbour, a military analyst sympathetic to the opposition, told Al-Monitor, “It seems that the armed opposition fighters chose to advance and infiltrate the Damascus front instead of the Adra front, as they cannot fight on both fronts.”

He added, “When the opposition is given the choice between Adra — which is about 30 km [19 miles] away from Damascus, the capital — and the capital itself, it will surely choose Damascus, and Jobar and Douma in particular.”

Jabbour continued, “The fighters chose the right front that further confuses the regime. The army’s control over Adra is not a victory over the opposition forces for several reasons. The town is devoid of people, and the regular army only broke into it after opposition forces withdrew. This reflects their weakness in the restoration of towns that they lose. If a small town like Adra has caused such confusion, then what happens when Douma is involved along with the rest of the key points that are essential for the presence of opposition fighters?”

Facts on the ground indicate that the full withdrawal from Adra came after a series of assassinations that affected Jaish al-Islam in eastern Ghouta and Harasta. Differences began to surface between the Unified Military Command in East Ghouta, led by Zahran Alloush — to whom Douma is a top priority, being the capital of the revolt in East Ghouta — and fighting battalions from Jabhat al-Nusra, which is absent from this unified army. According to these, the Jobar front is more worthy of their attention, as victory there would allow them to achieve their dream of storming Damascus, being the key entrance to the city. Thus, they withdrew their fighters from Adra toward Jobar, weakening Jaish al-Islam in Adra.

Today, given the Syrian army’s control of Adra, its advances toward Douma and infiltration of Jobar, it is safe to say that the chances of rebel fighters storming Damascus are decreasing. Harasta, 5 km (3 miles) north of Damascus in the middle of the Douma-Jobar axis, is now caught between two points of conflict. Should the army control Douma — a difficult task for the regime — then Harasta will lose its primary artery for the supply of arms, especially as it witnesses clashes at times and adjustments at others. So the name of the game will be wait and see.

A military source in the Syrian army told Al-Monitor on condition of anonymity, “Controlling Jobar and the progress toward Douma will help contribute to controlling Harasta, as most of the insurgents will either be sent to Jobar to try to stop the the army advance, or will be withdrawn to Douma to strengthen and consolidate their posts and prevent the arrival of military units there.”

The Syrian army’s restoration of Adra will likely reshuffle the cards in eastern Ghouta. As life returns to normal in Adra, the opposition is reinforcing its fighters at the Douma front, in the northeast close to Adra, for fear of infiltration by the regime forces, which seem to rejoicing over their achievement in Adra.