As Syrian army closes in, Douma residents turn against rebels 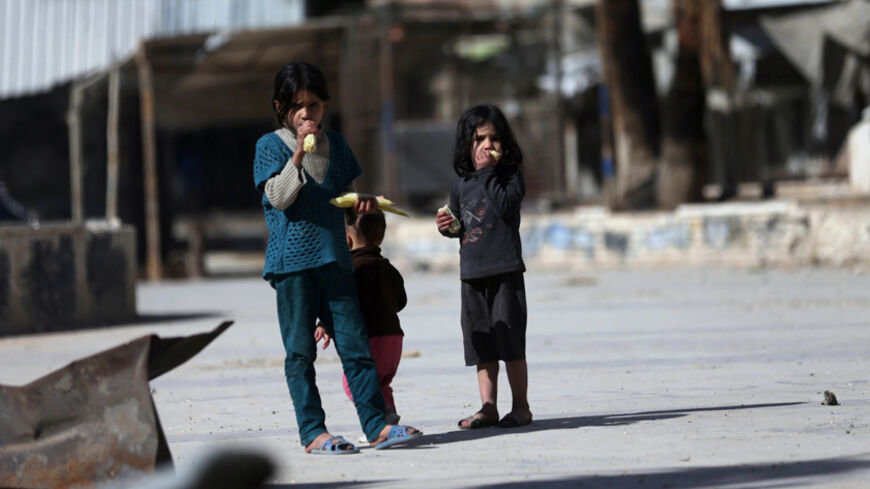 DAMASCUS, Syria — For the first time in two years, protests broke out Nov.15 in the rebel-held stronghold of Douma, 9 kilometers (5.6 miles) northeast of Damascus. Yet, this time the demonstrations weren’t held against the Syrian regime, but against Jaish al-Islam and the traders collaborating with it. The protests have been dubbed “The Hunger Demonstrations.”

Douma has been besieged by the Syrian army for a year and has since been under constant shelling. The suburb’s residents have consumed all their means of sustenance. The Syrian army checkpoint at al-Wafideen refugee camp on the Damascus-Douma road is preventing the entry of all humanitarian aid to the city, which has had adverse effects on citizens, especially since warlords and armed groups have taken control of supply stores.

The protests broke out as a reaction to the traders’ monopoly on food while the suburb is plagued with hunger and the traders’ warehouses are filled with all necessary goods. They refuse to sell any items before meeting the needs of fighters, according to Omar, one of the protesters who only revealed his first name for his personal safety.

“During the demonstrations, protesters stormed the warehouses of charities that are affiliated to Jaish al-Islam. The guards fired on us directly, which prompted some protesters to fire back, leading to serious injuries among some residents. Jaish al-Islam has also arrested the leaders of some factions that helped us and stood by our side,” Omar told Al-Monitor via Skype.

On Nov. 14, Ghouta’s Unified Judicial Council issued a statement warning against these “monopolists,” calling them partners of the regime in the siege on Ghouta. The council gave them a week to put the goods on the market at their previous moderate prices. In the statement, the council also called upon anyone who has information about warehouses or traders to report them, so as to take appropriate actions to this effect.

Following the issuance of the statement, 15 members affiliated with the council were subjected to a mass murder attempt, including Sheikh Abou Khaled al-Bashbash — the head of the council in Douma. According to Mohammed Abou Salem, one of the suburb’s dignitaries, the murder attempt was made by poisoning their meals during a meeting.

Abou Salem considered Jaish al-Islam as the only accused in this operation. “The council has been trying to put an end to the military forces’ monopoly of goods and [other] violations in Douma, as this is leading to infighting between factions in the area. Other groups such as the Muslim Brotherhood and the Salafist jihadist sheikhs took the same stance as us,” he told Al-Monitor in a telephone interview.

"The dispute between the military forces and these groups goes back to mid-2013, following the elections of the local council’s bodies, which resulted in many rifts," he said, adding that the Muslim Brotherhood has always been lax in dealing with the practices of the military forces, while the council and the Salafist groups have been strictly opposed to them.

Demonstrations against Zahran Alloush, the leader of Jaish al-Islam, have also been calling for an end to the bloody fighting with the guerrillas of Jaish al-Umma, which turned Douma into a battlefield of bombings, roadside bombs and direct clashes inside residential areas, according to people who fled the suburb and spoke to Al-Monitor.

The reasons behind the fighting go back to September, when several battalions and brigades in Ghouta declared that they had united under the banner of what they called Jaish al-Umma. Alloush responded to this announcement by saying, "There cannot be two heads for the same body," and by calling on all factions to work under the same, unified banner in Ghouta.

Meanwhile, the Syrian army continued to advance in the villages and hills surrounding Douma, which has become a major concern to Jaish al-Islam, especially in light of the ongoing war with the regime forces in eastern Ghouta, and the quick fall of its barricades in Tal Kurdi, Rihani and al-Alia farms, east and northeast of Douma.

The leaders of Jaish al-Islam previously announced that they would "hang" all those who call for dialogue with the Syrian regime, according to Mohammed al-Doumani, one of the fighters affiliated with Jaish al-Islam who spoke to Al-Monitor via Skype.

“Today, the rhetoric of the commander of Jaish al-Islam in Douma has changed. Jaish al-Islam is indirectly asking civil society groups in Douma to play a role in the negotiations for a cease-fire with the regime, especially since Alloush still holds the trump card of the kidnapped in Adra, which he would use as leverage in any negotiations,” al-Doumani added.

He also said that Alloush’s main objective is to stop the advance of regime forces in the surroundings of Douma, until his group is able to reinforce its barricades that began collapsing on the eastern front and until it settles scores with its rivals Jaish al-Umma, the Unified Judicial Council, and the civil activist groups affiliated with them on the home front.

Tamer al-Joulani, a journalist that covers the Syrian army’s operations in eastern Ghouta, told Al-Monitor, "The Syrian army believes that claims that Jaish al-Islam is willing to stop fighting the regime are not made with the aim of reaching reconciliation. They are a mere attempt to slow down the progress of the army around Douma, which is not going to happen."

Joulani added that the Syrian army’s control over the town of Adra in September has added pressure on the rebels in Douma. "The Syrian army advanced on the eastern front of Ghouta toward the north, took control of Tal Kurdi and Rihani and opened the Damascus-Baghdad road, which tightened the noose around Douma. This way, the army has managed to completely cut off all military and relief supplies, which heightened the infighting between warring factions, paving the way for the army to infiltrate Douma. In light of this situation, Jaish al-Islam was pushed to open channels of communication with the regime," Joulani said.

Moreover, according to Joulani, the Syrian army’s control over Douma would secure the capital completely, and open the door to Harasta and Jobar, north of Damascus, cutting off supplies to rebel fighters in Qalamoun to the capital’s north.

The infighting among rebel forces in eastern Ghouta, the hunger demonstrations, not to mention the danger of the Syrian army closing in on Jaish al-Islam strongholds, have cornered Zahran Alloush. Despite desperate attempts to hold on, Jaish al-Islam looks likely to lose control of Douma.