The residents of eastern Ghouta are falling victim to disputes between the warring factions in the area, as each accuses the other of monopolizing control of tunnels and food commodities. 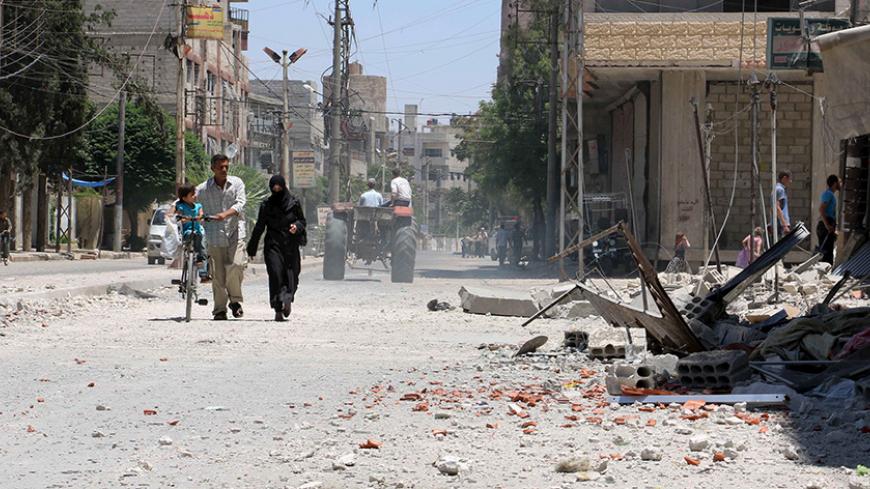 A family walks past the site of an airstrike by forces loyal to Syria's President Bashar al-Assad, in the eastern Ghouta area of Damascus, June 5, 2015. - REUTERS/Amer Almohibany
Mustafa al-Haj
August 14, 2015

DAMASCUS — Civilians in different parts of eastern Ghouta (9 kilometers, or 6 miles, east of Damascus), which is under the opposition’s control, have been chanting slogans such as “Yes, ​​hunger has exhausted us, but our dignity comes first," "The leaders have their stomachs filled, and the children are hungry. Be merciful to them," and "The people want the fall of Zahran.”

Civilians have taken to the streets in demonstrations that have escalated since early August in Hamouriya, Kafr Batna and Harasta. The most recent demonstration took place in Saqba city on Aug. 7, as thousands of civilians demonstrated and demanded unity and the elimination of differences between the opposition factions warring over Ghouta, particularly those between Jaish al-Islam and Ajnad al-Sham Islamic Union.

The people of Saqba also demanded the lifting of the blockade that has been imposed on Ghouta by the regime since June 2014, halting the monopoly of opposition factions over food commodities and tunnels — which represent the only outlet to Ghouta — the release of the detainees held in Jaish al-Islam’s prisons, and the fall of tyrant leaders, most notably Zahran Alloush, the commander of Jaish al-Islam in eastern Ghouta, because of the abusive practices and arbitrary arrests of civilians.

These demonstrations were not the first of their kind. Similar demonstrations dubbed “The Hunger Demonstrations” were held in November 2014, during which the demonstrators demanded that foodstuffs be distributed to them. Food commodities were being smuggled through the tunnels in Ghouta, and the opposition’s warehouses were filled; meanwhile, the citizens were eating grass and stale bread, while others were starving to death.

Syrian women protested during Ramadan in the city of Douma, demanding that Jaish al-Islam release their detained husbands and sons from its prisons.

Speaking to Al-Monitor via Skype, Abu Bakr al-Ghoutani, a media activist close to the Ajnad al-Sham Islamic Union — which is one of the largest groups of the Unified Military Command of Eastern Ghouta — said, “The Syrian army is not the only one besieging Ghouta. There is also Jaish al-Islam, led by Alloush, which controls a tunnel used for bringing in food, holds sway over their prices and arrests those civilians supporting Ajnad al-Sham because of the power struggles [between both parties].”

Al-Monitor spoke to Bara Abdul Rahman, a media activist close to Jaish al-Islam in eastern Ghouta. Abdul Rahman confirmed that the price rise is primarily due to the stifling blockade that the regime has imposed on eastern Ghouta since June 2014, and to the significant monopoly exerted by those controlling the tunnels.

He denied what Ghoutani said about Jaish al-Islam monopolizing the tunnels, noting that “Jaish al-Islam is not controlling any of the tunnels, the most famous of which is al-Zahta tunnel. This tunnel is controlled by Fajr al-Umma Brigade led by Khaled al-Daqer, who is known as al-Zaht, and Fajr al-Umma Brigade is affiliated with the Ajnad al-Sham Islamic Union. The warehouses of Fajr al-Umma include 1,000 tons of food commodities that were smuggled through the tunnel but are not being distributed to civilians.”

Abdul Rahman said, “This tunnel is well-known for trade and huge profits made as a result of Fajr al-Umma Brigade’s cooperation with the traders benefiting from the siege. Food supplies and other commodities are being sold for 10 times the normal price to the people, under the pretext that [Fajr al-Umma Brigade] needs funds and support. Yet, [these factions controlling the tunnels] are working based on a 50-50 profit share.”

The Unified Military Command of Eastern Ghouta consists of three main components, namely Jaish al-Islam, Ajnad al-Sham Islamic Union and al-Rahman Corps. Ties have been strained between all three because of the struggle over the tunnels, the control over Ghouta since June 18, and the mutual arrests between Jaish al-Islam and Ajnad al-Sham.

This has prompted Ajnad al-Sham and al-Rahman Corps to suspend their membership on Aug. 1 in the Unified Military Command of Eastern Ghouta. On the same day, Ajnad al-Sham and al-Rahma Corps released a joint statement calling for the referral of the tunnels issue to the eastern Ghouta general assembly, to form an office consisting of a group of specialists to oversee the list of civilians’ exit, provide institutions and civil society with goods, make sure they are fairly distributed and regulate selling prices in Ghouta.

Following the mediation by each of Jabhat al-Nusra and al-Rahman Corps to calm tension between the disputing parties, Jaish al-Islam and Ajnad al-Sham agreed on Aug. 7 to clear all aspects of armament and military deployment in Ghouta, and bring the situation back to what it was prior to the internal crisis; each faction would be deployed to its own area.

Jaish al-Islam and Ajnad al-Sham also agreed to swap all detainees between the two parties immediately, halt the media war between both sides, form a judicial commission consisting of both parties to run the tunnel and post the agreement on social networking sites.

On the outcome of this agreement that was implemented on Aug. 7, Abdul Rahman said, “The agreement was a mere formal media agreement, which means that the media war that both parties escalated last week was halted. Yet, the facts on the ground say otherwise. The Unified Military Command of Eastern Ghouta is on the brink of collapse. Regarding food supplies, they are still monopolized in Ajnad al-Sham’s warehouses; [the quantity] that was distributed does not even constitute 1% of what is there, and their prices have not declined.”

He added, “Detainees held by Jaish al-Islam were not released because of their involvement with the Islamic State.”

Abdul Rahman noted that the demonstrations that were held by civilians in Ghouta have stopped, and a cautious calm, interrupted by sporadic shelling on different parts of Ghouta by the regime forces, has prevailed in eastern Ghouta.

The biggest losers in this internal fighting remain the civilians in Ghouta. While they are denied the most basic of life's necessities, the regime’s aircraft are still bombing different parts of Ghouta and killing those who are left.