Syrian regime and opposition forces continue to clash in suburbs around Damascus, where the rebels are working in vain to reinforce the Jobar front. 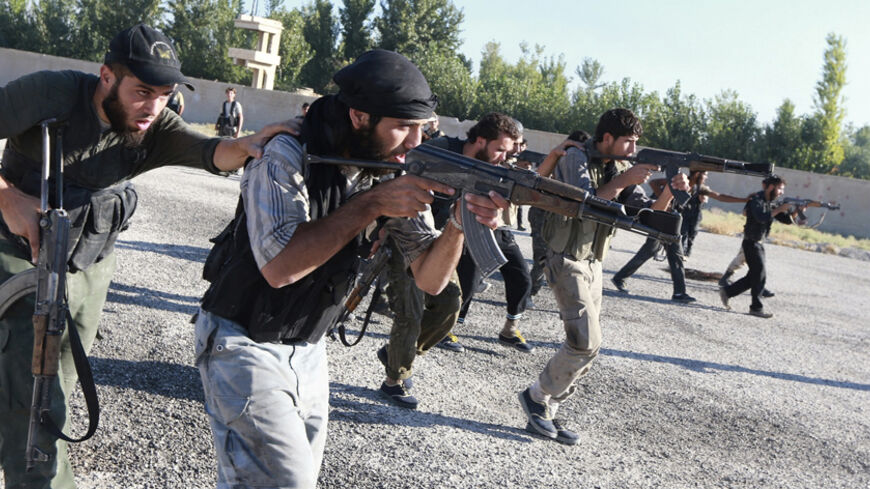 Rebel fighters demonstrate their skill with their weapons during a military display as part of a graduation ceremony at a camp in eastern Ghouta, near Damascus, Sept. 4, 2014. - REUTERS/Bassam Khabieh
Mustafa al-Haj
September 24, 2014

DAMASCUS, Syria — Since Sept. 17, showers of mortar shells and Katyusha rockets have been falling on Damascus. The calm that has prevailed in the city over the past few months disappeared when rebel fighters began escalating their attack on the eastern Ghouta front. This has led to new fronts opening up in several areas surrounding Damascus.

But little has changed for the people of Damascus since the Ajnad al-Sham Islamic Union announced the Ajnad 2 Operation in eastern Ghouta on Sept. 15. Damascenes have grown accustomed to falling rockets, an addition to the routine of daily traffic jams and crowds on the city’s streets. When a shell falls, only a few panic, and an hour later life returns to normal.

The Ajnad 2 operation, which targeted the security cordon around Damascus — including the neighborhoods of Abu Remmaneh, Malki, Shalan and al-Rawda — started after a video statement from Ajnad al-Sham on Sept. 15. “[The operation was started] following the hideous massacres and barbaric bombings by the regime on the besieged areas, particularly in Damascus and eastern and western Ghouta, that have reached civilian complexes and residential neighborhoods, claiming the lives of hundreds of martyrs and wounding [many more], especially in the besieged towns of eastern Ghouta.”

The operation coincided with the escalating clashes in eastern Ghouta, where on Sept. 9, rebels announced the seizure of the town of al-Dukhaniyya, just southeast of Damascus. This town is important, for it represents the main entrance to Ain Tarma and Kafr Batna, and is close to Jaramana, al-Duwailah, Kashkul and Kabas. The latter is an entrance to the old city of Damascus and close to the airport road.

A rebel spokesman told Al-Monitor that the battle in Ain Tarma was designed to reduce the pressure on Jobar, a neighborhood important for its location near the center of the capital. But the rebels failed to open a corridor for reinforcement opposition fighters from eastern Ghouta to the suburb of Jobar to halt the regime’s advance. The recent loss of the nearby strategic town of al-Maliha also dealt a severe blow to the rebels, as it had been a major source of rebel mortar attacks on Damascus. As the noose continues to tighten around eastern Ghouta with the army storming into Adra al-Balad, the chances of the opposition making advances on the ground appear to be decreasing. Adra and Jobar form a belt surrounding Damascus to the northeast, with the Islamic Front stronghold of Douma in the center.

The fierce battles and attacks were linked to what is happening in the entire region, from eastern Ghouta to Jobar, Douma and Adra, and great pressure has been put on Douma as the Syrian army has been monitoring the movement of armed militants there and striking them.

The regime forces have reinforced their positions and targeted Jobar with further airstrikes and tank shelling. On Sept. 20, SANA also reported, “The armed forces continued to crush the terrorists' fortifications in Jobar, to seize control of additional buildings and to eliminate many of them in the strongholds and tunnels where they are.” It has also posted videos showing the army going deep into the city.

Rebels have responded to the regime’s strikes by lobbing Katyusha rockets and mortar shells into the city center. On Sept. 17, 12 rockets randomly struck the city, with more mortar shells falling on Damascus on Sept. 20-21.

A retired Syrian army officer told Al-Monitor on condition of anonymity, “The failure of the armed opposition forces to achieve their objectives pushed them to target the city randomly, to create tension, nothing more. On the ground, the Syrian army is still making victories and the shells only resulted in innocent civilians being killed. What is happening is nothing but a media bubble for the opposition fighters after they failed to open a crossing toward Jobar and after they lost the town of Maliha when the Syrian army seized control of it last month.”

Saleh al-Nabawani, a member of the National Coordination Committee, told Al-Monitor, “The shells and rockets fell on civilian areas and not on security barracks or stations. Therefore, they have no military value.” He added, “I think that the regime is involved in this operation, which is a ploy that we're used to [hearing] from the regime, which is trying to look like it is suffering from terrorist attacks in front of its supporters and the international public, particularly since what is happening in the capital coincided with the arrival of the UN envoy to Syria, Staffan de Mistura.”

The rebels have tried to open fronts in the south and west of the capital after the failure of their last operation in eastern Ghouta. However, those efforts have so far been futile, for regime forces blocked their movements.

South of the capital, the neighborhoods of al-Midan and al-Zahira were stormed by Jabhat al-Nusra on Sept. 17 through the sewer system. They killed some National Defense Force members in a clear message to the regime against continuing to besiege areas in southern Damascus. This led to the closure of some roads and to the Syrian army surrounding the area.

On Sept. 22, the Syrian army reopened all of the roads leading to the city of Qudsayya, just northwest of Damascus, after they were closed the week before following tensions in the city that almost led to the collapse of the reconciliation agreement in place there.

The regime’s main focus of Jobar, however, is proving to be a challenge, with the regime sending additional ground troops and increasing airstrikes. Rebel groups have fortified the strategic neighborhood with a complex network of underground tunnels, slowing the advance of regime forces.