Lebanon is especially worried that the Syrian crisis could spread, writes Jean Aziz. 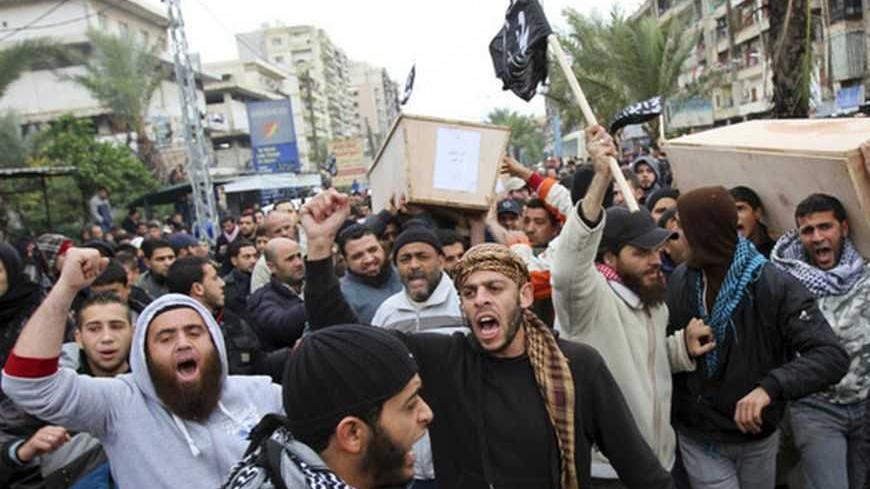 If the first factor threatening to ignite the military and security situation in Lebanon, against the backdrop of the Syrian civil war, is linked to the Palestinian demarcation line between the Palestinian refugee camp of Yarmouk in Syria and the Palestinian refugee camps around the Lebanese capital, there is another factor on the verge of blowing up the military situation, foreshadowing certain dangers to Lebanon. This factor is exemplified by the violent conflict raging on the sectarian, economic and geopolitical demarcation line in the Damascus, Aleppo and Syrian coast triangle. The conflict is geographically adjacent to Lebanon, but in reality puts the country right into the heart of its explosive calculations.

More than 22 months since the outbreak of the civil war in Syria, experts have come to agree that the main geographical nerve, or the essence of the struggle for control on the ground, revolves around this triangle that connects Damascus with the capital of the Syrian north — the city of Aleppo — on the one hand, and the two cities with the Syrian coast — which is dominated by a pro-regime Alawite majority — on the other.

About two years ago, it became clear to everyone that the war between the regime and its opponents centered on the axes of this triangle. Meanwhile, the rest of Syria seemed to sit on the sidelines of the war, in a state of mere reaction, or merely attempting to prove themselves as part of the Syrian protest movement.

This is the state of the Jazeera region, the wide desert that extends up to the borders of Iraq, where there is practically no news about the daily battles; no break-ins, no occupations, no withdrawals. It is as if all of Syria, or all of its opposition, are focused on that triangle.

In this regard, the regime's strategy seems clear: It wants to keep the Damascus-Aleppo line both passable and safe for the people and its armed forces and to get a hold of it at any price. The regime is also seeking to keep this line connected with the cities of the Mediterranean coast, from Latakia in the north to Tartus in the south, through Jableh, Banias and other Syrian Mediterranean sea fronts.

In contrast, the armed opposition's strategy seems exactly the opposite. The opposition is trying to separate Aleppo from Damascus, or at least to isolate Aleppo. It is trying to make a breakthrough from the Aleppo-Damascus line towards the Mediterranean coast of Syria. This is how war on the three axes of this triangle essentially turned into a war on the banks of the Orontes River. This explains the ferocity of the battles in areas such as al-Qusayr, Homs, Hama and other hot spots along the Orontes line. These areas are of dual military importance in the context of the concept of the triangle war, as they separate Damascus and Aleppo on the one hand, and the Syrian interior from the Mediterranean coast on the other.

In this context, it’s not a coincidence that the military and water demarcation line — some go so far as to label it the gas, oil and economic line — i.e., the Orontes River itself, stems from Lebanon, before entering Syrian territory and traversing it entirely. The river even flows into the district of Iskenderun, which has been under Turkish control since 1933.

Amid this natural overlap between Lebanon and Syria, the most complex overlap is demographic and human. Suffice it for any researcher to take a quick look at the map of the two neighboring countries to immediately notice this mutual "incursion." The Syrian capital of Damascus reaches the south of the country, and it almost disappears behind the eastern Lebanese mountain chain. This makes the distance between Damascus and the city of Zahle, the capital of the Lebanese Bekaa region, shorter than the distance between Damascus and any other Syrian city. In contrast, the northern Lebanese region of Hermel reaches the southern Syrian interior. This puts Hermel closer to the Syrian city of Homs than any other Syrian city.

What do this overlaps and incursions infer? They quite simply show that the Damascus-Aleppo line, which passes through Homs, is easily accessible from the northern Lebanese territory. In other words, any armed military infiltration from northern Lebanon toward Homs could pose a significant threat to the security of the natural connection between the two main points of the Syrian triangle war: Damascus and Aleppo. They also mean that the line connecting the Syrian capital with the Syrian Mediterranean coast is actually on Lebanese borders and almost passes through Lebanese territory.

The shortest path between Damascus and Tartous goes through Lebanon. It starts from Arsal in central Bekaa, facing Damascus toward the west, then through the Lebanese region of Kaa, northeast Arsal, all the way to the regions of Baalbek and Hermel. In the northern part of Lebanon, the borderline passes through the Akkar region, which stretches to the Mediterranean, adjacent to the Syrian coast.

Thus far, the problem seems related to geography. However, when people living in the regions and the areas along the borders of the two countries are treated based on their ethnic and political identities, the issue becomes much more complicated.

In Arsal, the first Lebanese town located on the line between Damascus and the Syrian coast, there are about 45,000 Sunnis, the majority of whom are opponents of the Syrian regime.

This explains the fact that thousands of armed Syrian rebels have taken refuge in this area in particular, just as it explains the endless clashes between its people and the displaced on the one hand, and the Syrian regime on the other.

On the other hand, Lebanese regions with Shiite prevalence begin to stretch out to the north and northwest of Arsal. These people support the Syrian regime, unlike their Sunni neighbors. Shiites in these regions are also close to Syrian towns that oppose the regime and are therefore hostile to Shiites. The Syrian city of Kasir, for instance, lies a few kilometers away from the Lebanese Shiite towns.

Also, the Christian community overlaps with Alawites on the Syrian side. The same social texture can be found in the Lebanese part of the territory, in the regions of Akkar and Tripoli in particular, the capital of northern Lebanon. It should be noted that the Sunni’s comprise the dominant group within Lebanon’s borders in the north. Christians come in second, followed by Alawites, who are a Lebanese minority scattered among some villages in Akkar, a suburb of Tripoli.

What can military experts conclude from this geopolitical border? According to them, if international efforts fail to put an end to the ongoing clashes and reach a settlement, the Syrian war raging in Damascus, Aleppo and along the Lebanese coast is likely to drag Lebanon to the center of its battlefields.

Armed Syrian refugees in Lebanon, who are backed by some Lebanese, will certainly try to block the highway from Damascus to the coast of Lebanon or through it, in Arsal or Akkar, as they have previously attempted to do.

They will also try, as they did before, to influence the line of communication between Damascus and Aleppo. They can do this by  either setting fire to the road — as has happened many times over the months — by infiltrating Homs through Lebanon — as happened two weeks ago, when 13 Lebanese citizens from Akkar tried to infiltrate toward the Syrian village of Tal Khalakh and were killed. They can also attempt to supply armed rebels with ammunition and weapons.

In contrast, the Syrian regime will not tolerate such attempts, and will likely respond in border areas. It is also likely that the regime will rely on its Lebanese Shiite supporters that live in border areas — especially those who live inside Syrian territory — to prevent militants from achieving the two aforementioned goals: blocking the Damascus-Aleppo highway and blocking the highway from Damascus to the coast of Lebanon or through it.

Thus Lebanese citizens live in eager anticipation of the path to negotiations regarding a settlement for the war in Syria. They realize, whether they  admit it publicly or not, that the war greatly affects them, especially if it continues and grows in size.