As Assad’s Forces Take Control Of Qusair, What Comes Next?

Now that the Syrian regime’s forces control half of the city of Qusair near Lebanon’s northern border, the balance seems to once again be shifting in the Syrian conflict. 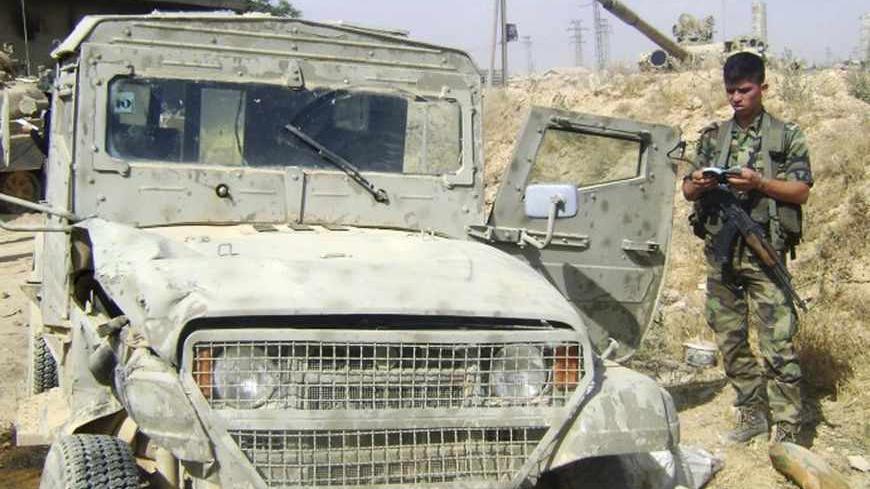 Syria's national news agency SANA distributed this photo on May 20, 2013, showing what SANA says is an Israeli military vehicle used by rebel fighters in Qusair. An Israeli military spokeswoman said the vehicle was decommissioned a decade ago and dismissed the footage as "poor propaganda." - REUTERS/SANA

The recent attack on the Syrian city of Qusair — which is located in the Homs countryside, a strategic area whose importance was highlighted in several Al-Monitor articles — carries many indications.

The latest developments on the ground confirm that pro-Assad military forces have conducted an incursion into the city and reached the main highway in Qusair on the evening of Monday [May 20]. This has allowed them to control half of the city and to maintain a military siege on the other half still under the control of opposition armed forces. There are several observations regarding this pivotal battle:

First, the developments of the Qusair battle coincided with reports published by some websites close to Hezbollah about the death of Shiite militants, said to number 16, in defense of the Sayyida Zeinab shrine in Damascus. The same websites said that the "defenders" include nationals from Lebanon, Syria, Iraq, and even Iran. In Beirut, it was confirmed that the nephew of Fayez Shokor, the secretary-general of the Baath Party in Lebanon and an ally of Hezbollah, was among the casualties. This concurrence increased accusations against the main Lebanese Shiite organization by its opponents of aiding the Syrian regime forces in the Qusair battle.

Second, the immediate response in Lebanon to the advance of the regime forces in Qusair was the outbreak of renewed military clashes in the northern city of Tripoli between Sunni neighborhoods and the sole Alawite neighborhood located on the eastern side of the city. Lebanese Alawite sources expressed serious concerns that the [Syrian] regime’s full control over Qusair would lead to reprisals or retaliations in Tripoli against the Alawite neighborhood. Some even fear that Sunni fundamentalists may attempt to storm the Alawite neighborhood in response to the fall of Qusair. The situation has prompted the Lebanese military to step up its level of alert in anticipation of any possible developments.

Third, in the same context, it has now become evident that the fall of Qusair into the hands of the Syrian regime effectively implies that the Syrian army will very soon control the entire common border with northern Lebanon. In the Lebanese areas lying south of this border flourish Sunni fundamentalist and jihadist groups. Thus, these groups will be caught between the Syrian army in the north, the Lebanese army deployed on its territory, and the Shiite Hezbollah forces in the east. It is a new risky and critical position for these militants, as for the Lebanese border areas in the north. When the Syrian army completes the process of cleansing Qusair and its vicinity from the remaining pockets of opposition militants, the Syrian forces might very likely conduct incursions into Lebanese northern territories to strike the bases of Syrian opposition militants there, or to cut off their logistical supply lines. Such incursions will expand the sphere of Syrian-Lebanese tensions, which may extend into northern Lebanese territories, and perhaps areas that have so far remained unaffected by the conflict.

Fourth, military information from Damascus suggests that tightening the grip on Qusair — and thus the entire Homs countryside — would effectively mean controlling the largest part of the most vital route for the regime, between the Syrian capital and the predominantly Alawite west coast, as well as between the capital and the city of Aleppo. This would allow the regime’s military forces to choose its upcoming targets. Accordingly, the next battle is expected to take place in two main locations:

Information on the ground obtained by Al-Monitor confirms the presence of a military buildup in preparation for the Barzeh battle, and whose results may be determined in the next few days.

The second location that is likely to witness an escalation of military operations after the fall Qusair is the area between the towns of Yabrud and Qara north of Damascus, between the capital and Qusair. Yabrud is the last key stronghold and gathering point for opposition militants in the area known as Nabk. Taking control of this area would lead to a full control by the regime over the Lebanese area of Arsal, whose bushes are used by opposition militants as a safe haven and logistical site. Therefore, the regime’s control of Yabrud would open the door to Syrian military incursions against opposition militants inside eastern Lebanese territory. The fall of Qusair would lead to similar incursions in the north.

Last but not least, the military situation in Syria will likely affect the political situation in Lebanon, particularly the parliamentary and governmental crises. Some believe that the recent positions of Druze leader Walid Jumblatt, which appeared to be more in line with Hezbollah's positions on these two crises, are the first signs. This issue will be followed up on and analyzed in the next article.