The events that unfolded in the three-week battle for Qusair will prove fateful for the future role of Hezbollah in the Syrian, as well as regional, conflict. 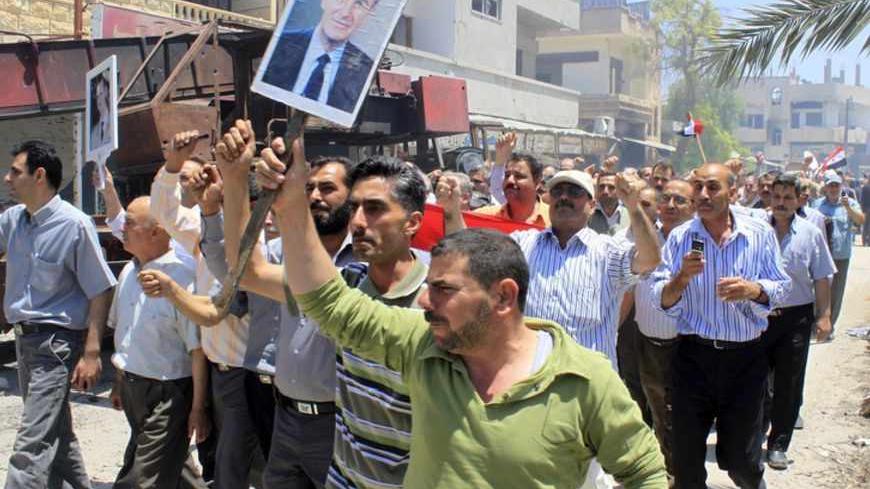 Civilians hold up pictures of Syria's President Bashar al-Assad and of his father, Syria's late president Hafez al-Assad (R), as they celebrate in Qusair, June 6, 2013, a day after the Syrian army took control of the town from rebel fighters. - REUTERS/Rami Bleibel

Syrian areas loyal to President Bashar al-Assad were quiet and calm on the evening of Wednesday, June 5, the same as they have been on any other evening for the past 27 months that this violent war that plagues the country has gone on.

But, in contrast, Beirut’s southern suburb, the main stronghold of Lebanon’s Shiite Hezbollah, was the scene of unusual occurrences: streets filled with car convoys and thousands of jubilant young men firing their weapons in the air, as sweets were distributed to passersby on the roads. The occasion for this celebration? The fall of the Syrian city of Qusair!

Any observer watching these events cannot fail to see that the identity of the victor in that Syrian town — situated a few kilometers northeast of the Lebanese border — is none other than Hezbollah. It led the battle, and thus it deserves the victory. Hezbollah is the most affected by its results and aftermath, and beyond its aftermath, as the party’s Secretary-General Hassan Nasrallah is famous for saying.

Sources with knowledge of the events told Al-Monitor that the next few days will reveal many military and front-line facts concerning that battle, the quick resolution of which can be attributed to several tactical factors. First is the overwhelming firepower employed by the Syrian army against the last pockets of opposition militants and Jabhat al-Nusra fighters. Second is the pinpointing and targeting of the hiding places used by commanders of the main fighting factions, as well as the destruction of the central operational command of Jabhat al-Nusra jihadists, who lead the opposition in the city. These two factors damaged the command-and-control capability of the militants, and devastated their ability to communicate. These developments occurred as the siege imposed upon the militants began to take its toll, especially on their ability to provide themselves with fuel, while their human losses escalated to unsustainable levels.

On the Monday prior to the city’s fall, the attacking forces estimated that the militants’ casualties included 1,000 dead and approximately 400 wounded, who were the source of great pressure upon the survivors, as the city itself was emptied of all civilian presence, its inhabitants having all fled elsewhere.

At this stage of the battle, Lebanese Druze leader Walid Jumblatt contacted Hezbollah’s leadership and proposed to mediate the withdrawal of those he characterized as “civilians and wounded.” The Shiite party quickly realized that Jumblatt’s request had reached Beirut from besieged Qusair via more than one regional faction, namely Turkey and Arab Gulf states. This, to Hezbollah, was proof that victory was imminent and so its reply was clear: There was one way out kept open toward the neighboring town of Dabaa. It was the exit route used by civilians to safely and peacefully flee the besieged city. Throughout the last few days, the militants tried to outfox us and use it to bring in added reinforcement, yet we kept it open; they can now withdraw through it.

And so it was. During the night of Tuesday, June 4, around 1,000 militants and wounded fighters conducted a disorganized retreat out of Qusair, a development that came to affirm the vow that Nasrallah gave to his supporters on May 25, when he said: “As I had previously promised you victory, I now promise you victory once again.” The battle ended then, but its repercussions have just begun being felt, and on more than one level.

The first of these repercussions was the psychological impact that the city’s fall had on both sides of the Lebanese and Syrian divides. What occurred is maybe still being suppressed or denied, but the battle’s importance was evident by the fact that Hezbollah’s foes in Syria, and especially in Lebanon, filled the media over the past two weeks with talk that the Shiite organization had embroiled itself in the morass of a war of attrition that would keep it ensnared forever in Qusair. They said that the “steadfast city would now be renamed Qusairgrad after the Russian city of Stalingrad!”

All this was before events there quickly and surprisingly unfolded to confirm the miscalculation of the foes, and the accuracy and effectiveness of Hezbollah’s actions. But the results on the ground remain the most telling, and can be divided among three categories and fronts: Syrian, Lebanese and even Israeli.

On the Syrian front, one might look at the internal military repercussions of Qusair’s fall, as well as its political and external ramifications. Militarily, sources knowledgeable with the course of the battle told us that what transpired there was part of a comprehensive, carefully and patiently prepared plan that was in the making for more than a year; a plan whose subsequent phases will start being implemented. Al-Monitor, in numerous articles, had discussed the strategic importance of Qusair; especially in that, through it, one could completely control Damascus’ western and northwestern countryside, as well as control the vital communication routes between Damascus and Homs, in addition to the ones between Damascus and the predominantly Alawite Syrian coast.

But our sources went even further to confirm that Qusair’s fall came after other extremely important military accomplishments in Syria, such as the opening of a safe and direct military route from Damascus to Aleppo in the north, completely separate from the international highway that already existed between the two cities. It is a 122-kilometer [75-mile] road that was built during the last seven months and only passes through areas controlled by the regime, while bypassing the few insurgent pockets that exist between these two main Syrian cities.

In this regard, it should be noted that a number of those pockets were permanently “dealt with” when the new road was being built. In parallel, a second military road, approximately 20 kilometers [12 miles] in length, was opened between Aleppo and its airport. A third road nearing completion starts in Aleppo, passes through the two predominantly Shiite cities of al-Nubl and al-Zahraa, which are in Aleppo’s countryside and encircled by Jabhat al-Nusra jihadists, and ends at the Ming Airport adjacent to the Syrian-Turkish border.

These sources thus revealed to us that transport and supply routes able to accommodate personnel, logistics, armament, and material needs have been secured between all main Syrian areas controlled by the regime. These are routes that will be put to use in more than one direction now that Qusair has fallen. They will first be used to control the Damascus countryside and Eastern Ghouta, thereby closing the last remaining gap in the border with Lebanon, namely Arsal.

Afterward, all options become possible, such as moving south toward Daraa to close the border with Jordan, or north all the way to the Turkish border.

The battle of Qusair’s ramifications on the internal political situation in Syria deserve in-depth discussion, which we will leave for another article.

On the Lebanese front, it might be premature to talk about political implications of Hezbollah’s military victory, but its effects can easily be viewed through any future positions espoused by Jumblatt, who has distanced himself from Hezbollah throughout the past months, giving the main Sunni faction led by former Prime Minister Saad Hariri the chance to form a slight, fragile majority in parliament. Will Jumblatt once again change sides after Qusair? Or will he gradually reverse course, in keeping with the newly developing balance of power? The answer to that question requires that we wait and see what the future military and political ramifications will be.

Jumblatt will wait for matters to become clearer on the ground in Syria, especially in the areas adjacent to the predominantly Druze Suwayda province in the south of the country. He will also monitor any political steps taken by Arab, regional and Western pro-opposition countries, and accordingly formulate his stance on the Lebanese scene, in a safe manner devoid of miscalculations and suicidal decisions, similar to the ones he nearly took in 2008.

Also on the Lebanese front, there exist grave security concerns relating to the repercussions of the Qusair battle. Fears abound that Jabhat al-Nusra fighters might carry out revenge attacks in certain Lebanese areas, particularly those with a Shiite majority, either through al-Qaeda-inspired suicide attacks or booby-trapped cars targeting civilians. This is an eventuality that Lebanese authorities are well aware of and have begun taking measures to detect and prevent.

The last remaining front is Israel. Israelis have closely followed the details of the Qusair battle, out of their interest in the performance of a fierce enemy of theirs: Hezbollah. It is certain that they have utilized every available asset to monitor the minutest details of the battle, such as the number of fighters in the attacking force as well as the weapons, equipment, and battle tactics that they used. But, to the Israelis, the most important aspect of the Qusair battle was that it was the first offensive waged by Hezbollah, 30 years after the party began to favor a defensive military doctrine.

This, in itself, is the source of great concern on the southern side of the Lebanese border: What if this organization, the stunning defensive capabilities of which Israel experienced firsthand, has become capable of replicating its successes on the offense instead of defense?

This is Qusair, the stories of which will forever reverberate in the psyche of many.