Jabhat al-Nusra’s seizure of the two camps of al-Hamidiyya and Wadi al-Daif in Idlib province from the Syrian army’s control is an important victory for the al-Qaeda branch, as it continues to consolidate its control over Idlib. 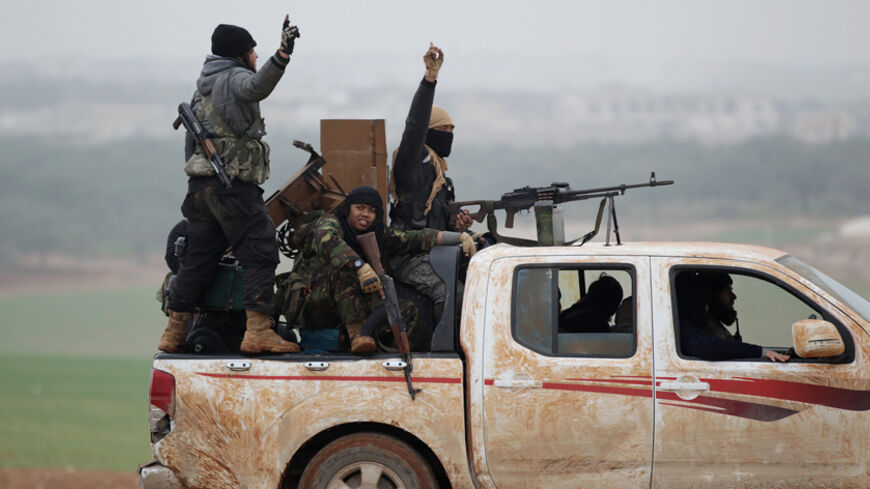 Members of Jabhat al-Nusra gesture as they drive in a convoy touring villages in the southern countryside of Idlib, which they said they have seized from Syrian rebel factions, Dec. 2, 2014. - REUTERS/Khalil Ashawi
Mustafa al-Haj
December 19, 2014

DAMASCUS, Syria — Less than 24 hours after the announcement of the "liberation battle," the northern front in Syria witnessed accelerated developments as Jabhat al-Nusra and Jund al-Aqsa, with the participation of Ahrar al-Sham, seized the al-Hamidiyya and Wadi al-Daif camps on Dec. 15. These belonged to the Syrian army and are located in the southern countryside of Idlib. This significant development comes after two years of repeated attacks on the two camps that have been besieged by opposition fighters for 11 months.

Before the Syrian civil war, these two camps were the largest fuel reservoir for the Syrian army. But as the conflict erupted, the two camps turned into a gathering point for the Syrian armed forces, which used them as a base to launch shells and missiles toward the villages of Idlib’s countryside.

The two camps contain 40 military points, about 1,500 officers and elements of the Syrian army and 50 military vehicles, some of which were destroyed at an earlier stage by attacks on the two camps over the past two years. Helicopters were the only means to deliver supplies to the two besieged camps.

Abu Fadl, a Ahrar al-Sham member who participated in the battle, told Al-Monitor: "We started the operation with Jabhat al-Nusra with introductory artillery that lasted for three consecutive days. Jabhat al-Nusra used TAO missiles in the battle, which it looted from the Syria Revolutionaries Front after it expelled them and seized their warehouses last month."

"On Sunday, Dec. 14, a direct and simultaneous attack was carried out on all military points, as [Jabhat al-]Nusra led the Wadi al-Daif battle, while Ahrar al-Sham led the al-Hamidiyya battle with about 3,300 fighters. The battles ended with the complete liberation of the two camps. About 200 members of the Syrian army were killed and the rest of the army members withdrew to the south, toward the north countryside of Hama," he said.

The camps were considered the "jewel of the north" for the regime, said Abu Fadl, as it was strategically located and blocked rebel movements between the north and south, and the coast and the east. "The regime troops used to send their reinforcements from Idlib city and the coast to the two camps and other inland areas," he said.

Following the withdrawal from the two camps, the Syrian air force intensified its air raids on the region and its neighboring villages, where Ahrar al-Sham and Jabhat al-Nusra fighters are concentrated. It launched 34 raids on Wadi al-Daif with explosive barrels and missiles. Asked about the effectiveness of these raids, Abu Fadl said, "Power is in the hands of those who own the land; the regime planes can claim the lives of civilians and fighters, but they can by no means restore the land. The Idlib countryside is fully liberated."

Official media outlets refrained from commenting on the Syrian army's loss, and when the two camps fell, the Syrian state media outlets merely announced that the Syrian army took control of al-Mallah Farms near the Handarat camp in Aleppo’s countryside. The army went to the camp, where it is engaged in fierce battles with rebels to tighten the noose around the city of Aleppo.

Asked about the Syrian army's withdrawal from the two camps, a source in the Syrian army told Al-Monitor on condition of anonymity: "The bad weather conditions made it harder for the air force to participate in the attack, which made it easier to seize the camps. These camps had stood firm for the past two years despite the dozens of battles that were launched against them."

He said: "On Monday, Dec. 15, at 5 a.m., an organized withdrawal from Wadi al-Daif camp took place based on an emergency plan that was developed weeks ago. The withdrawal took place in the form of groups, while important groups provided fire cover for the withdrawal as a number of people were martyred and wounded."

The source added that most of the soldiers and officers arrived in the town of Morek, north of Hama, and pointed out that the warplanes greatly contributed to covering the withdrawal road.

The loss of the two strategic camps may pave the way for Jabhat al-Nusra and other pro-Jabhat al-Nusra Islamic battalions to advance toward Abu al-Duhur military airport and the city of Idlib, the only remaining city under the regime's control in this province. It can even lead it to advance to Hama to the south. Also, this loss is a personal defeat for Col. Suhail al-Hassan, Syrian President Bashar al-Assad’s favorite officer, and it may lead the Syrian army to give up on its ambitions to control a long road extending from Hama in the center to Aleppo in the north.

Commenting on the fall of the strategic camps of al-Hamidiyya and Wadi al-Daif, Ismail al-Habal, a pro-regime military expert said: "Although the two camps are located in a strategic area on the main road, the Syrian armed forces have been considering to withdraw its forces to another region, where they would be able to move more freely and move their military equipment away from the terrorists’ threats. Indeed, the withdrawal plan was successfully implemented. All the army units are now positioned in Morek, which will serve as the launchpad for military operations toward the southern countryside of Idlib. This is seen as a moral victory, since the army that has been surrounded for two years managed to break its siege and come out with the minimum losses possible to reform its ranks.

"The fuel tanks in both camps are mostly empty. Most of the equipment has been moved under Syrian air force cover, after the army managed to inflict heavy losses on the terrorists’ ranks, killing no less than 150 fighters. The rest of the army military equipment is damaged."

Habal also emphasized that the Syrian army withdrawal from an area does not mean that this area fell under the control of terrorist forces. The Syrian jets are still striking their positions to reach their strongholds in villages. Thus, they will not be able to control the international highway that is monitored by the air force. The army’s withdrawal will not affect its victories in Aleppo, according to Habal.

Fayez al-Hariri, a pro-opposition military analyst, offered a different perspective. "There are several consequences to these battles in the medium-term. First, the Syrian regime lost its will to reopen the Damascus-Aleppo international road, which Sohail Hassan swore to open. This has become inaccessible. In addition, the regime’s victories in Morek lost their importance after the liberation of the camps. Second, the results are represented by the opposition’s advance toward Hama after being threatened from both the east and north. The regime has become exposed after its roads were closed and the rebels’ supply roads were opened. This would affect the ongoing battles in Aleppo; the regime, which aims to lay siege to Aleppo, is now threatened to be besieged there," he told Al-Monitor.

With this victory, Jabhat al-Nusra will have further expanded in Idlib, especially in the southern countryside of the province. Also, the victory will silence rebel critics of Jabhat al-Nusra’s campaign to liquidate the Syria Revolutionaries Front and expel Jamal Maarouf in October. Within two months, Jabhat al-Nusra has achieved a level of progress that Maarouf did not achieve during two years of operations against the two camps. This may create a further favorable environment for Jabhat al-Nusra in the region.

By completing its control over the countryside of Idlib, from the north to the south, Jabhat al-Nusra will have expanded the limits of the emirate it intends to set up, once it liquidates its opponents and reinforces its positions against the Syrian army in the northern countryside of Hama, especially in Morek, which the Syrian army regained in October.

If Ahrar al-Sham pledges allegiance to Jabhat al-Nusra, the only obstacle remaining for al-Qaeda’s Syria branch would be the city of Idlib. Moreover, opposition activists believe that the fall of the military bases of al-Hamidiyya and Wadi al-Daif could mean the fall of Idlib soon. This would give Jabhat al-Nusra time to expand northward toward Aleppo and south toward the northern countryside of Hama, and to recover Morek, whose loss no longer constitutes any strategic meaning for Jabhat al-Nusra.