The Turkish army is preparing to build more observation posts in Syria’s Idlib, where a fragile cease-fire is violated daily. 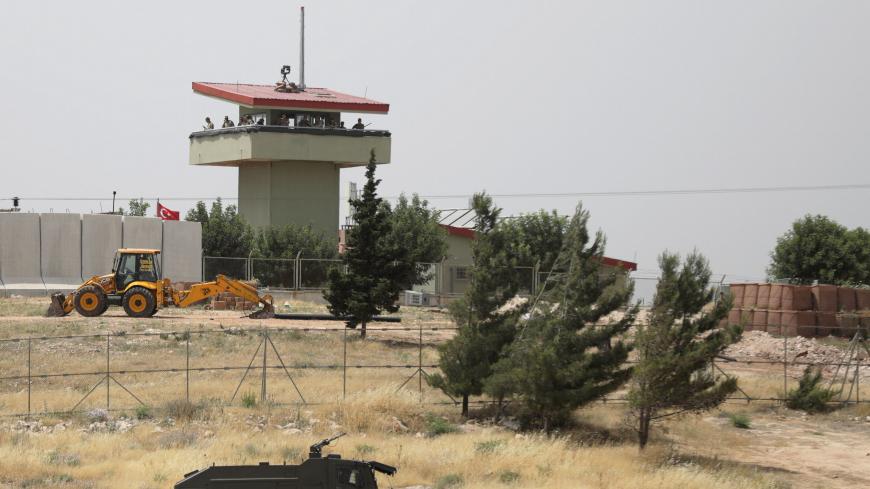 Turkish soldiers stand on a watch tower at the Atmeh crossing on the Syrian-Turkish border, as seen from the Syrian side, in Idlib governorate, Syria, May 31, 2019. - REUTERS/Khalil Ashawi

ALEPPO — The cease-fire the Russian Defense Ministry announced on Aug. 30 in Syria’s northern province of Idlib is still in effect. Yet, both regime and opposition forces are violating it with daily ground shelling. Syrian and Russian warplanes have remained present over Idlib and bombed western villages and towns, causing civilian deaths. Russia denied responsibility for the airstrikes.

Mohamad Rasheed, a member of the media office of the National Liberation Front, affiliated with the Free Syrian Army (FSA), told Al-Monitor, “On Sept. 11, we saw Russian warplanes flying over and they bombarded several villages and civilian towns in western Idlib, killing one civilian and wounding two others. On Sept. 12, Russian and Syrian warplanes carried out a number of airstrikes on towns and villages in southern and western Idlib and Jabal al-Zawiyah governorate. A girl was killed in the village of Sarjah on her way home from school.”

The shelling by regime forces was the heaviest on Sept. 12, putting a White Helmet center in Sfohen, Idlib countryside, out of service. But despite the violations, the truce remains technically in force.

The armed opposition fears that the truce will end and that regime forces and their Russian allies will begin a new round of violence to take control of more areas in Idlib, as Russian-backed militias deploy in southern Idlib in preparation of a renewed offensive. The opposition hopes that Turkey will stop the regime’s progress and prevent it from seizing more areas.

Meanwhile, Turkey seems to understand the opposition's concerns and has called for an urgent end of hostilities, warning of a humanitarian catastrophe if the shelling continues. It began ground reconnaissance operations in several areas of Idlib province at the end of August to establish more checkpoints and thus prevent regime forces from advancing.

Activist Abdel Fattah al-Hussein, who works between the Aleppo and Idlib provinces, told Al-Monitor, “On Aug. 28, a Turkish military team of high-ranking officers toured Idlib province and explored several locations on the Aleppo-Latakia and Aleppo-Damascus roads.”

Hussein added, “The Turkish military team is composed of four military vehicles that explored sites on both sides of the international roads. It is assumed that several observation points will be established in the area.”

A military source from the FSA-affiliated Sham Legion told Al-Monitor on condition of anonymity, “The Turkish army told us that it is increasing the number of its military posts in the de-escalation zone in Idlib.”

He said, “On Aug. 28, Turkish forces explored several locations in Idlib to set up a number of Turkish observation points," adding, "The Turkish forces could establish the new posts west of Saraqeb, one near the brick factory and the youth camp on the Aleppo-Latakia road, the third post in Mahmal area, an additional one in Jisr al-Shughur west of Idlib and another in the southern countryside of Aleppo.”

The source noted, “Our Turkish brothers told us that they insist on keeping post number nine in the city of Morek, northern Hama, and assured us that all Turkish checkpoints will remain in Idlib.”

The main points of contention between Russia and Turkey in Idlib concern the jihadist organizations withdrawing from the de-escalation zone agreed in September 2018 and resuming commercial and civil traffic on the Aleppo-Damascus and Aleppo-Latakia roads. Hayat Tahrir al-Sham (HTS), a former al-Qaeda affiliate, refuses to withdraw from the de-escalation zone and opposition factions generally reject Russian military patrols to monitor the roads.

Therefore, the regime forces and their allies have a pretext to resume the fighting.

Rasheed noted, “There are two main objectives of establishing new Turkish checkpoints. The first is to reduce violations and the regime’s daily shelling in these areas and to implement the Sochi agreement signed between Turkey and Russia on Idlib. Putting an end to violations contributes to the area’s stability and facilitates the return of refugees and displaced persons to their homes after hundreds of thousands were stuck near the border during the fighting. The second objective is to create the proper conditions for opening international roads.”

Rasheed added, “On Sept. 1, the Turkish army erected a checkpoint in the town of Maar Hattat, southern Idlib, in the area between Khan Sheikhun in the south and Maarat al-Numan in the north. We expect more posts to be set up in the coming period.”

Meanwhile, FSA commander Col. Khaled Kattini told Al-Monitor, “Turkish-Russian negotiations are underway on easing the escalation in Idlib and stopping the military operations. One of the ways Turkey is trying to stop the regime’s progress is to deploy more observation points, and these are also being discussed between the two sides. The Turkish army has already explored the sites where control points are supposed to be erected but is waiting for an agreement with Russia on that.”

Civilians in Idlib province no longer rely much on the presence of Turkish checkpoints after their failure to prevent regime forces from advancing and taking over large areas north of Hama and southern Idlib since the beginning of military operations on May 2. The residents thus do not believe the posts Turkey intends to erect will play an influential role in Idlib.

Activist Yafa al-Hamawe, from the northern countryside of Hama, told Al-Monitor, “The checkpoints did not prevent the regime forces from advancing. Their presence is a mere formality and the establishment of new posts will not change the situation in favor of the opposition.”

Activist Shadia Tataa, from Idlib province, believes that the Turkish checkpoints can contribute to preventing the regime’s progress and reduce the escalation, but only if done in accordance with the Turkish-Russian understandings, which now focus on opening international roads.

“Displaced people from areas controlled by regime forces during their recent military operations have been disappointed by the Turkish checkpoints, so we do not want a fate like theirs. We look forward to a more active role for the Turkish army that will contribute to stopping the fighting, stabilizing Idlib and facilitating the return of displaced persons stuck in camps near the Turkish border north of Idlib,” she told Al-Monitor.