Syrian officials’ statements about the coming battle for Idlib are alarming the residents of the rebel-held province. 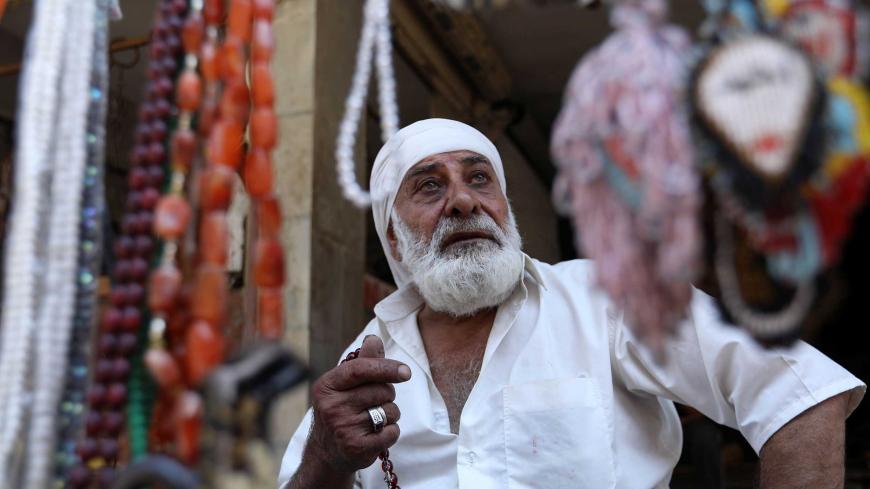 IDLIB, Syria — Al-Haj Abu Youssef keeps up with the news at the top of the hour in his small shop in al-Dabit, a neighborhood in the suburbs of Idlib, eager to hear reassuring news about the fate of his city.

Abu Youssef and others share concerns about statements made by political and military officials in Damascus about a possible military attack to retake Idlib province from the opposition factions that could force hundreds of thousands into displacement.

These concerns have sparked heated debates all over Idlib, where residents cannot help but worry about where they would go.

Abu Youssef sits in his shop on a bamboo chair with his eye fixed on the television, switching channels. “I think it is possible. No — I am sure that the regime will attack Idlib’s countryside, supported by Russian air cover. But when and how deep into Idlib will it reach? That is what keeps me up at night,” he told Al-Monitor.

“With Russian support, the regime has regained control over Daraa in the south and the Homs countryside. It is now Idlib’s turn,” he added.

On July 26, President Bashar al-Assad announced that retaking Idlib was his next priority, saying, “Now our goal is Idlib, but not just Idlib alone — various territories in eastern Syria as well.”

Abu Youssef believes that Moscow, whose warplanes entered Syria in September 2015 to support Assad’s regime, is the real decision-maker.

“The regime cannot do it alone. Actually, it does not dare do it alone,” he said.

However, Abu Youssef still doubts Russia's statements about its unwillingness to participate in the attack, although several meetings were held between Russia and Turkey to discuss ways to avoid an offensive in Idlib.

“[The Russians] are excellent manipulators and know exactly how to maneuver in politics. Whenever they wish to attack, they have a pre-existing cover, be it al-Qaeda or other terrorist factions, as they call them,” he explained.

The Russian president's envoy to Syria, Alexander Lavrentiev, made it clear on the sidelines of the Astana 10 conference July 31, “Any large-scale operation in Idlib is out of the question.”

But in reality, all indications suggest that the battle is coming, and soon.

This is particularly possible since opposition factions are heading toward the lines of contact with the regime and deploying military reinforcements, matched by similar reinforcements on the regime’s part.

The opposition factions have tightened their security grip in the region. On Aug. 8, they led an arrest campaign in the southern part of Idlib province, accusing dozens of arrestees of promoting reconciliation with the regime and facilitating its entry into the province.

On Aug. 9, regime helicopters dropped leaflets over the towns of Bensh and Tifnaz, in the center of Idlib province, calling on the people to “reconcile” and cooperate with the regime's army to end the war and eliminate the “terrorist” control.

Ahmed al-Hussein, an information engineering student at the University of Idlib, mocked the leaflets, saying, “Is there really anyone who still thinks it is a matter of ‘reconciliation’ between the opposition and the regime? The issue is much more complex than that; there are regional and international interests governing the decision.”

Hussein told Al-Monitor, “I am certain that the Turks who have entered Idlib will not let go of it so easily. Not for our sake, of course, but for their own interests.”

Turkey, which has 12 military observation posts in Idlib province, still sends semi-weekly supplies such as concrete slabs to reinforce and protect these points. “Such reinforcements convince me even more,” Hussein noted.

On several occasions, Turkey has warned of the consequences of an attack on Idlib, and Ankara is concerned that such an incident could lead to another massive influx of refugees into its territory.

For the past three years, Idlib has been a haven for displaced people fleeing the regime and the militias supporting it in Aleppo, Homs, Damascus and elsewhere. Idlib, which had a population of 1.4 million in 2010, currently has 2.5 million people, most of whom are internally displaced persons, according to the United Nations. However, local relief organizations estimate a much higher number of 3.6 million.

The question arises as to where all those people would go if the regime takes over Idlib.

“I never carried a weapon. I do not like it. But one way or another I will defend myself when I need to and cannot escape elsewhere,” he added.

Idlib is controlled by a large group of armed opposition factions. Until recently, Hayat Tahrir al-Sham, the new iteration of Jabhat al-Nusra, was the largest and most powerful force in the province. A coalition of opposition factions called the National Front for Liberation recently surfaced, becoming the largest force in Idlib, particularly after new armed factions joined on Aug. 1.

Clashes sporadically erupt among the armed factions over gaining control over towns and cities, mostly ending with fragile peace agreements, the last of which was signed on April 24.

Activists and other observers believe that the move to expand the National Front for Liberation came under pressure from Turkey on the moderate opposition factions to unite under a single entity, in order to undermine the control of Hayat Tahrir al-Sham and eventually force it out.

A political activist from western Idlib‘s Jisr al-Shughour, where regime shelling can be heard in the outskirts of the city, told Al-Monitor, “I do not rule out the possibility of the regime controlling this city.”

He explained, “The regime aims to restore the international Aleppo-Latakia and Aleppo-Damascus roads. This means cutting 65% of the area of Idlib. Turkey is trying to prevent this from happening, but it remains in a weak position so long as it does not completely eliminate Jabhat al-Nusra, one way or another.”