The Syrian regime's progress in Idlib and control of the key city of Saraqeb on the Aleppo-Damascus highway have marked a turning point in its fight against the Turkish-backed opposition. 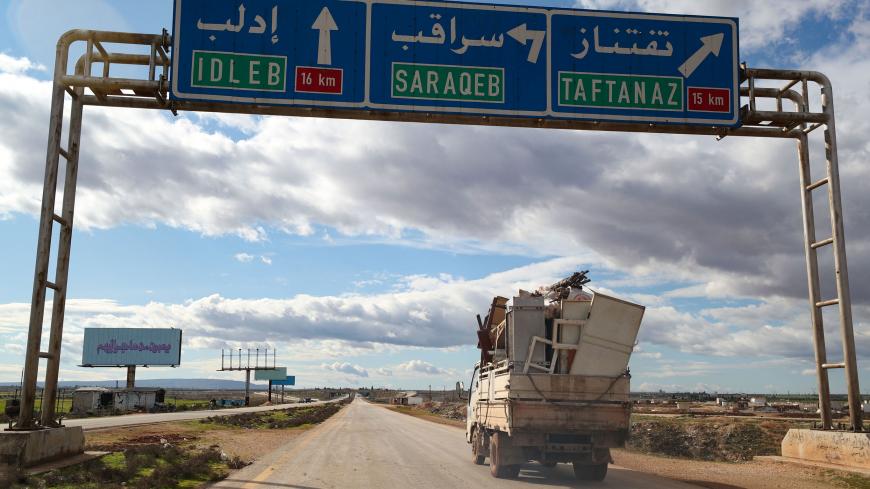 A truck loaded with a family's belongings drives along the Aleppo-Latakia highway near the town of Saraqeb, Idlib province, Syria, Jan. 31, 2020. - OMAR HAJ KADOUR/AFP via Getty Images

ALEPPO — On Feb. 6, Syrian regime forces and their Russian-backed militia allies took control of the city of Saraqeb, in the east of Idlib province. It marked a turning point in the military operations against the Syrian opposition in northwestern Syria, as the city is located at the intersection of the strategic M5 (that connects Aleppo to Damascus) and M4 (which connects Aleppo to Latakia) highways — top objectives of the regime.

Regime forces besieged Saraqeb from all sides Feb. 5, and the Turkish troops deployed in its vicinity did not prevent them from entering and taking control of the city.

The regime forces then proceeded with their ground operations toward the north and took control of more opposition-held areas in the eastern Idlib countryside and the southern countryside of Aleppo, all the way to the outskirts of the city of Aleppo.

The regime has already made rapid progress and has taken control of dozens of villages and towns on both sides of the highway north of Saraqeb, in addition to villages in the western and southern countryside of Aleppo, including the strategic hill of al-Eiss in Aleppo's southern countryside and tightened its control over the entire M5 highway Feb. 11.

Halabi added, “Saraqeb's location on the Aleppo-Damascus M5 highway at its intersection with the Aleppo-Latakia M4 highway gave it great importance for the regime forces, which were able to take over despite Turkish forces deployed around the city. Saraqeb was thus a gate for regime forces to enter the southern countryside of Aleppo and continue to the north and quickly take control of the M5 highway amid violent battles during which the Turkish-backed opposition was forced to withdraw due to massive air and ground shelling.”

Mohammed Rasheed, an activist from al-Ghab Plain in the northwestern countryside of Hama near Idlib province, told Al-Monitor that the regime forces' control of Saraqeb allowed the forces advancing from the eastern Idlib countryside to regroup with the forces in the southern countryside of Aleppo on Feb. 8. The resulting pressure cost the opposition factions many more areas after Saraqeb.

The media coordinator of the National Army affiliated with the Free Syrian Army, Yahya Mayo, told Al-Monitor that the regime forces’ control of Saraqeb cost the opposition areas in the southern and western countryside of Aleppo. Intensive air and ground attacks forced tens of thousands of residents to move toward the Syrian-Turkish border north of Aleppo and Idlib, fearing the regime forces might reach their towns.

Ahmed Bakro, a member of the political committee in Idlib, told Al-Monitor that Saraqeb “facilitated complete control of the M5 highway, which is vital for transportation and land trade in Syria and also connects it to the outside world. The regime is in urgent need of international roads at this time of great economic hardship.”

Bakro added, “Saraqeb is particularly significant since it is an important stronghold for opponents of Bashar al-Assad’s regime and has been central for the anti-regime revolutionary movement since 2011. Controlling it … affects morale among the opposition.”

Mohammed Shakib al-Khaled, the head of the Syrian National Democratic Movement who resides in the city of Idlib, told Al-Monitor, “The regime forces’ control of Saraqeb … pushes the opposition toward marginal areas near the Syrian-Turkish border. … Saraqeb will be a gate to the Syrian desert from eastern Idlib and through it, the regime will restore control over large areas in northwestern Syria.”

The regime forces now aspire to control the Aleppo-Latakia M4 highway, which passes through Arihah and Jisr al-Shughur, two large cities in the countryside of Idlib province that are just as important as Saraqeb.

Should the regime forces succeed in taking control of the M4 highway, the Turkish-backed opposition will be crammed into an area near the border with no access to major roadways — that is, if the regime forces and their allies stop there and do not proceed to take over Idlib province entirely.