The Turkish-supported Free Syrian Army is sending more forces from its National Army to shore up the opposition in its fight against Syrian regime troops in Idlib province. 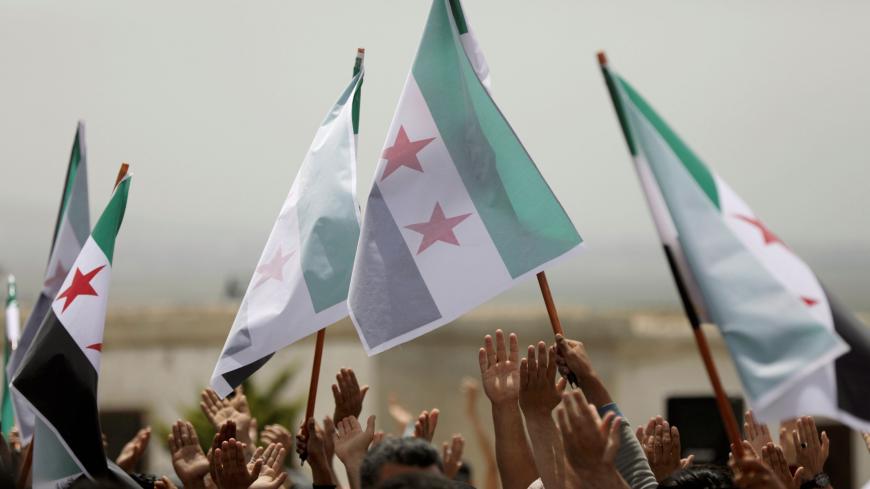 Displaced Syrians hold Free Syrian Army flags during a protest at the Atmeh crossing in Idlib province, on the Syrian-Turkish border, Syria, May 31, 2019. - REUTERS/Khalil Ashawi

ALEPPO, Syria — Battles are continuing in Idlib province despite a declared Aug. 31 cease-fire and the Turkish-backed Free Syrian Army (FSA) is sending more fighters to the area to support opposition forces as they try to counter regime advances.

Backup from the FSA’s National Army has been arriving from Aleppo province to the fronts in southern Idlib since Aug. 18, but so far the reinforcements haven't been enough to stop regime forces and their allies, which seized the villages of Khwein al-Kabir, Tell Aghbar and al-Tamanah on Aug. 29 and 30. The week before, the regime took over Khan Sheikhoun and parts of northern Hama province.

On Aug. 28, Syrian regime warplanes reportedly killed 14 civilians in Maaret al-Numan, including six children and two women, and 34 others were wounded, including women and children.

Russian authorities announced that regime forces would unilaterally cease fire in Idlib on Aug. 31. However, the regime continues to breach the truce with heavy aerial and ground shelling, targeting opposition positions as well as civilian villages and towns on both sides of the Aleppo-Damascus highway between Khan Sheikhoun in the south and Marat al-Numan in the north.

The opposition in Idlib needs greater support not only in terms of fighters, but also missiles and anti-tank equipment and other heavy weapons. Regime forces have a huge amount of air and ground fire coverage, with considerable Russian support.

Activist Abd al-Fattah al-Hussein, who moves between Aleppo and Idlib provinces, told Al-Monitor, “The opposition realized that it was on the verge of a violent confrontation with the regime forces, so it began to prepare for all possibilities of military escalation Aug. 23. It started to deploy fighters on new lines of contact with regime forces in southern and eastern Idlib and reinforced its forces with more fighters and weapons, joined by [FSA National Army] fighters from the Aleppo countryside.”

Hussein said the opposition is counting heavily on backup sent by the National Army "and hopes that this will contribute to shifting the scales and stop the regime forces from advancing even farther and taking over more areas that are rapidly collapsing in front of these attacking forces.”

Meanwhile, FSA spokesman Maj. Yusuf Hamoud told Al-Monitor that hundreds of National Army fighters "have joined the fronts, in coordination with the National Liberation Front [NLF] operations room in the countryside of Hama and Idlib." The NLF is another coalition of opposition militias that has Turkey's backing.

Mohamad Rasheed, a member of the NLF media office, told Al-Monitor the backup fighters from the FSA's National Army have been distributed on several axes in southern Idlib. They are still coming in from different National Army-affiliated factions such as the Third Legion, the al-Rahman Legion, Ahrar al-Sharqiya, al-Majd Corps, the 2nd Corps-2nd Regiment (al-Hamza Division) and several others.

NLF spokesman Capt. Naji Abu Hudeifa told Al-Monitor there is direct, ongoing coordination with backup sent by the National Army to fight alongside the NLF.

But Yahya Mayo, media coordinator of the National Coalition for Syrian Revolutionary and Opposition Forces, told Al-Monitor, “There is a big difference between the opposition and the regime forces in the southern Idlib battles." Mayo said there has not been enough backup yet from the National Army. "There are no statistics on the number of fighters sent so far, but they are no more than 1,000 additional fighters, which is insufficient,” Mayo said.

Mayo added, “Regime forces avoid direct confrontation with the opposition in the battles. They rather take advantage of intense aerial and ground fire to advance after destroying the areas and towns they are trying to control, in which case the opposition needs [better] weapons and ammunition to stand a chance."